Australia have won 26 of the 37 matches played under Clarke. 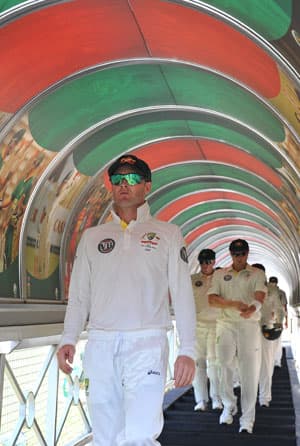 During the final months of Ricky Ponting’s captaincy I was one of the many people not entirely convinced Michael Clarke was the right choice to lead Australia. Like most people, this slightly distorted view point was due to the constant drama and distracting media spotlight around his high-profile relationship with Lara Bingle, the incidents that were on display to the public.

It was a tough time for Clarke. He was subjected to loads of criticism and attacks regarding his personal life, in many ways his character. His personal affairs gave rise to doubts if he would be able to handle the intensity as captain and if he would have the necessary mental toughness. It wasn’t about Clarke’s game; it was because of his perceived lifestyle.

During the time of his emergence as a senior player, the roller-coaster ride in his personal life seemed to be travelling at the speed of a Brett Lee bouncer, as opposed to the steady pace of Glenn McGrath. It seemed to just spiral out of control with serious emotional problems and family difficulties. It was a testing situation for Clarke as a man coming of age in both his personal and professional life.

It was important for the supporters that he get his career back on track and remind everyone of the value he had to offer. It came with a century against the Black Caps at the Basin Reserve in 2010. Even though a difficult Ashes series followed, his full-time ODI promotion was just around the corner. He was impressive with his leadership after taking over as ODI captain in Ponting’s absence.

Clarke is a sharp tactician, flexible with his methods, smart when marshalling his bowlers and can be as aggressive and ruthless in many regards as his predecessors. Having been given the full-time job after taking over Ponting, these elements of his own leadership scope have been well on display for all too see. He leads from the front, is highly positive with his statements, backs his team 100% and takes accountability and responsibility quite seriously.

He’s quick to address poor performances and will write off his own performances if the team falls short. This was evident when he laughed off one of his best-ever centuries – the 151 against South Africa. He dismissed his century as a worthless effort and wanted to forget it as it came in a lost cause for his team.

A few days after losing that Test, I had a brief chat with Clarke at a net session. He was upbeat, positive and very enthusiastic to talk about moving forward and assured the Baggy Green supporters present there by saying, “Things are on track, mate.”

Clarke was leading the side on the back of a Sri Lankan series win (where he scored a century and also grafted hard for a half-century on a very difficult batting track). This slight momentum, despite the freak match at Newlands, would have helped the team’s confidence in the second Test where victory was achieved in nail-biting circumstances.

Granted it was a game both teams let slip on a number of passages of play but Clarke had seen his team achieve victory and come back from a daunting situation.

Self-belief is a key aspect of Clarke’s character and this seemed to flow amongst each and every player of his side, including Ponting.

Australian cricket would want to see this team emerge as Clarke’s core group where he knows his players who feed off each other’s abilities. This was how it was for the Australian teams under Allan Border and Steve Waugh. It would be great to see Clarke embrace the die-hard attitude of Steve Waugh and Border and drum into the team. Having said that, Clarke has the leadership qualities to do it, to follow through with his own game plan and ensure that it is done in the most tactical way possible.

He may appear to be a soft bloke on the outside, but to blend into one of the greatest sides cricket has known, to overcome personal struggles and shrug of haters in the media, to lead from the front a mixed side with his own demonstrative input, to gain the respect of his team are all signs of a mentally tough person.

All he needs is to get a good summer with the bat in hand which will indicate he can handle his own game with the responsibility in front of the Australian cricket supporting masses.

The side is now a very intense blend of experience and inexperience. The stocks look to be setting into place with the emerging talent, though the desired results may take a while to come around.

While he is still just six-match old as a Test captain, his ODI captaincy stats as skipper are impressive as Australia have won 26 of the 37 matches played under him.

If Clarke can stay true to himself, continue to move forward with his attitude of “win every game and improve all the time”, while scoring plenty of runs (which he is more than capable of doing), he should gain the respect and confidence of Australian cricket supporters. It’s a big summer for him.

Agarkar should not have left the Mumbai squad: Sandhu