Michael Clarke lived by the sword and died by it

Michael Clarke lived by the sword and died by it

Clarke was not Ponting: he did look intimidating in the Baggy Green, but always remained that bloke who got luckier with hard work.

It will all be over, soon. The pain, the agony, and the challenge to pick yourself up every morning, reach training facilities well before the rest of the squad, be done with preparations before the team arrives and spend time handling trivial matters. It was not that Michael Clarke had stopped enjoying it all; it was because he was not able to live up to the expectations, not able to lead from the front, not able to meet the standards he himself had set. That is why he decided to call it quits.

Clarke set standards very high for himself and his team. Time and again the expectations took severe beating. Along with the traumas the 34-year-old had to suffer off the field — the death of Phillip Hughes, the mortifying Homeworkgate scandal in India in 2012-13 and Australia’s mixed fortunes in international cricket, Clarke had to battle a body growing old every passing day, a spirit that was sagging with every poor outing, but still he kept battling them all.

Life had turned no less than a roller-coaster ride for Clarke. A World Cup win just four months ago was followed by yet another embarrassment in England in Ashes 2015.  Australia reached England after a successful run in the last 18 months or so (barring the forgettable series against Pakistan in UAE). They were impeccable in Ashes 2013-14, were able to beat South Africa in their backyard and peaked at the right time in ICC Cricket World Cup 2015 to prove their revival was no flash in the pan.

Perhaps the innings of 161 not out against a destructive South African bowling attack in Newlands will be remembered as one of the best innings Clarke produced. It was not one of those characteristic Clarke hundreds wherein he grinded out a spectacular century: it was special because he took the blows on his body in the early stages of the innings, weathered the storms and emerged as a winner. Clarke produced a gem, and returned with a fractured shoulder in bargain.

The age of 34 is not ideal one for modern day cricketers to retire, especially when they are not playing across formats and in numerous Twenty20 leagues around the world. Just four months ago, on that memorable Melbourne night on March 29, Clarke led his team to World Cup glory with a fine half-century, signing off from one-day cricket hoping to make most of time left in him  for the betterment of Australia. Unfortunately, that was not how it was supposed to be. ALSO READ: Michael Clarke blames failure to lead from front for retirement

Why did Clarke retire? For those at a distance, it will be easy to say he did right by not attracting further criticism by hanging on to his post in the wake of Ashes 2015 defeat. But for those who understand Clarke’s psyche, this was perhaps the worst phase in his glorious career.

After all, there have been a handful of Australian cricketers who were a part of 5-0 annihilations of England. Clarke was there — not once, but twice. He was an integral part in 2006-07 when Australia avenged their defeat of Ashes 2005, and led his team to yet another clean sweep of England in 2013-14 when Australia were stuttering. Despite this he would finish without an Ashes win on English soil; the defeat in this edition would have shattered him despite all his exploits. ALSO READ: Michael Clarke retires from international cricket, says it is the right time

Clarke’s mantra has always revolved around working hard. He had described how Ricky Ponting would not pick the bat for days and then walk into a cricket game and smash a century. Clarke was no Ponting: he did look intimidating in the Baggy Green, but always remained that bloke who got luckier with hard work. Unfortunately, little did Clarke know that the World Cup win would leave him stranded without any luck.

Clarke has always remained someone with an interesting choice of words. Defeats would often be described as ‘kicks on the backside’, and wins would always spur him to express satisfaction. At Trent Bridge, after Stuart Broad ran riot, Clarke fell chasing one way outside the off-stump, trying to be aggressive in a situation when most others would have left the ball alone. Later, after Day One, Clarke described it all by the words ‘live by the sword and die by the sword’.

The frustration, the shortcomings, the extra time spent on the field without tangible results resulted in Clarke retiring. He could not have been more right in saying it multiple times in his first speech on retirement: it is the right time.

It is a shame that Australia not always matched the standards their captain had set. Mediocrity is a trait rapidly turning into a characteristic of this team that would be magnificent on one day and pathetic on the next. The next captain, in all probability Steve Smith, will have serious issues to tackle. Clarke can ride off into the sunset, leaving behind him a legacy of a hardworking cricketer who never backed out.

One can only hope that this bunch of Australian cricketers will take a cue from their ‘Captain Courageous’. 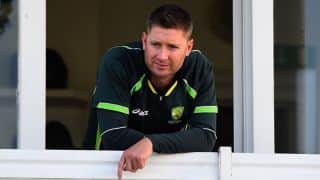