Despite his graceful and silent run-up, Michael Holding bowled at scorching pace, hitting timber and batsman as generously than ever.

Michael Holding, born February 16, 1954, was one of the greatest fast bowlers ever seen in the history of cricket. Arunabha Sengupta relives the career of the man, whose graceful and silent run up followed by scorching pace led him to be known as “Whispering Death”.

It was languid verse as he ran in and destructive pace as he let the ball go — a rhythmic lead-up to a wrecking finish.

Michael Holding turned around from far, far away, where the eyes had to squint to see. And then he ran in fluid, silent, long strides, with an action almost hypnotic in grace and athleticism. And as he waltzed into follow-through, the ball darted at rates seldom witnessed even in the heydays of pace bowling in the 1970s. His stealthy, extensive run up was soundless and serene. Umpires were seldom aware of his approach till the corner of their eyes caught him stretched in his delivery stride. Not for nothing was he was he called “Whispering Death“.

The plight of the courageous Brian Close at Old Trafford, played over and over again on YouTube or on the DVDs of Fire in Babylon, bears testimony to his hostility. Yet, Holding’s greatest feat was probably achieved two Tests later at The Oval.

On a parched, dry surface, docile and dead after a long summer of merciless drought, Viv Richards piled up 291 and West Indies declared at 687. Dennis Amiss, who had been struck by Holding on the head during an early tour match, grafted a double hundred. The strip was barren enough to kill the enthusiasm of the any fast bowler. The other pacers in the match — a formidable lot consisting of Andy Roberts, Vanburn Holder, Bob Willis and Mike Selvey — bowled 127.5 overs between them for a meagre return of 5 wickets.

And on this same parched graveyard of a wicket, Michael Holding reverted to the absolute fundamentals of fast bowling — full, straight and fast. Stumps flew, toes were crushed and batsman after batsman walked back. Nine times the woodwork rattled, three batsmen were trapped plumb — only two of his wickets involved a fielder. Holding finished the match with 8 for 92 and 6 for 57, and West Indies won by 231 runs.

The instrument of destruction

The raw Michael Holding had bowled as fast as, and sometimes quicker than Jeff Thomson, during the disastrous Australian odyssey of 1975-76. However, in the five Tests Down Under — his first series — he could manage just 10 wickets at 61.40. The young man, stepping into the harsh world of professional cricket, was brought to the verge of tears by the extreme ruthlessness shown by the Australians.

The beleaguered Clive Lloyd looked around for a force that could be as destructive as the fearsome combination of Dennis Lillee and Jeff Thomson. And in Holding he found perhaps the most lethal of his four barrelled machinery that would dominate world cricket for the two decades to follow.

Holding was the instrument used to test the formula of speed in that notorious bloodbath at Jamaica against the hopping Indians. His formidable hostility, generously sprinkled with fierce bouncers that darted at the body, prompted Bishan Bedi to close the Indian innings with 6 wickets down in the first innings and with 5 remaining in the second.

And when the West Indians were riled up by Tony Greig’s injudicious use of the word ‘grovel’, the English batting fell apart as the wrath of the team was channelled through the thunderbolts of the fast men. Holding captured 28 wickets at 12.71 in the 4 Tests he played in that series.

A troubled hiatus followed when a lot of Test careers fell through the chasm created in world cricket by Kerry Packer’s World Series Cricket. By the time the stars of West Indies cricket re-emerged to play at the top level, they had been forged into a fantastic winning unit.

Michael Holding continued to take wickets around the world. With Roberts, Joel Garner and Colin Croft — and later alongside Malcolm Marshall when Croft opted for the rebellious ways of South African tours — he formed an alliance of annihilation that the world had never witnessed outside the battlefield.

Land, soil and moisture had little to do with it. Holding and his mates blasted oppositions in Australia, England and India with the same relentless consistency as on the wickets of the Caribbean.

Well into the eighties the run-up remained long, and the pace scorching. The Australians, anticipating a repeat of the rout of 1976, were demolished at home in 1979. In 1981, Geoff Boycott faced what is largely believed to be the most hostile over ever bowled, fending and missing five express deliveries before losing his off-stump to the sixth.

And later, when his run up was shortened and the pace was cut down by a fraction, he toured India, bowled on the most placid of wickets, and finished with 30 wickets in six Tests at 22.10.

The only country where his bowling did not quite manage the same degree of success was New Zealand. At the height of their powers, the West Indian juggernaut was thwarted in that heavenly island in 1979-80, thanks to fighting performances, the brilliance of Richard Hadlee and some atrocious umpiring. It was during that series that Holding carried out the other most photographed feat with only peripheral connection with his bowling. Plagued by several leg before decisions against the West Indian batsmen at Dunedin, Holding charged in to bowl when New Zealand batted. When John Parker was beaten by a ripper, he was convinced that the batsman had edged to the wicketkeeper Deryck Murray. However, umpire John Hastie remained unmoved. A visibly irate Holding walked over to the striker’s end and let fly a kick, knocking the stumps out of the ground.

It was in this same country that Holding played his last Test match in 1987. At Basin Reserve, Wellington, John Wright and Martin Crowe hit hundreds and the 33-year old pace bowler toiled for 37 overs without wicket. Suffering from a back strain, Holding announced his retirement at the end of the game.

In 60 Tests, Holding ended up with 249 wickets at 23.68, boasting a strike rate of 50.9. A handy lower-order batsman, he hit as many as 6 fifties in Test cricket. His 36 sixes still stand as the highest by a batsman with fewer than 1,000 runs. And for a fast bowler, he was often more than a useful fielder, capable of snapping up superb catches in the gully off his pace bowling mates.

Holding never took One-Day Internationals too seriously, but managed to finish with 142 wickets in that format as well, at an average of 21.36 and a mind-boggling economy rate of 3.32. His 2 for 16 in from 8 overs in the final was an important factor in the 1979 World Cup triumph. But, perhaps the most memorable moment for him in the shorter game came in 1984 as an onlooker from the other end. Richards destroyed the English attack to score 189, putting on an unbeaten 106 for the last wicket while Holding scored 12 not out.

Having moved on from the field, he has hovered in the fringes ever since, as a commentator whose voice is popular, recognised and often lovingly imitated.

Sachin Tendulkar is much loved in Australia, says Lisa Sthalekar 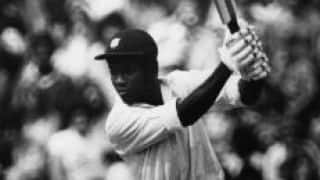