Mickey Arthur makes it clear that he wants to make this team as successful as it can be and would not let external forces dictate how he goes about his business.

Born in Johannesburg, Mickey Arthur represented Griqualand West, Orange Free State and South Africa A between 1986 and 2001. His greater successes came once his cricket career had ended when he coached South Africa between 2005 and 2010, leading them to the number one ranking across all formats and turning them into a dominant force in world cricket. He also had a brief stint as coach of the Australian team and also coached the Karachi Kings in the recent Pakistan Super League.

His outstanding coaching pedigree brought him to the attention of the Pakistan Cricket Board who were looking for a replacement for Waqar Younis and on May 6th, he became the fifth foreign Head Coach of the Pakistan team. READ MORE: Urdu lessons for Pakistan’s new coach Mickey Arthur?

In an exclusive interview with PakPassion.net, Arthur spoke about a range of subjects including Pakistan’s struggles in the shorter formats, the importance of the Head Coach being part of the selection panel and Shahid Afridi’s future in international cricket.

Pak Passion (PP): Some would say that you are mad to take on the job of the Pakistan cricket team’s Head Coach. What appealed to you about the role?

Mickey Arthur (MA): What appeals to me is the actual challenge of it. I think it’s a massive challenge and I do enjoy challenges for my sins. I think this is a challenge that is right up there and one where I feel like I can really make a difference.

PP: It’s widely recognised that the role of Head Coach of the Pakistan cricket team is one of the toughest jobs in the world due to external influences. Is this something that concerns you?

MA: You just have to be able to block all of that out and I certainly will. I’m going there to do the best I possibly can for Pakistan cricket. I want to make this team as successful as it can be and I will not let external forces dictate how I go about doing my business and I will certainly be blocking out all that external noise.

PP: Does it bother you that you are going into a job where you were not the first choice candidate?

MA: According to the Pakistan Cricket Board when I spoke with them, apparently there was no offer made to anybody apart from me. So I’m not sure as there are so many rumours that go around Pakistan cricket at any given time that who knows. But according to the PCB I was the first person they made an actual offer to, so that’s what I am taking at face value.

PP: How do you intend to tackle the issue of ill discipline from some of the players you will be working with?

MA: I just want to create an environment that allows the players to perform and I know that any environment with structure where there’s proper values has got a far better chance of success than one that hasn’t. So I’m going to create a culture that the players can go into and perform and where they also enjoy their cricket. I want to stimulate the players in the right way and ensure they are enjoying their cricket and perform. The important thing is that when people enjoy their cricket they get the best out of themselves.

PP: Do you think the iron fist or the softly approach will be the best way to deal with the ‘problem children’ you will be working with?

MA: I will judge that when I’m in it. It’s pretty hard to make that assessment now. You have to judge things carefully and hopefully act accordingly. I will do that later down the line.

PP: How will you use the experience of coaching South Africa and Australia in your role with Pakistan?

MA: You learn from so many things. I had five and a half largely very successful years with South Africa and then my first year with Australia was really good and in the second year things didn’t work out and you learn from those experiences. Would I have done the same things again? I’m not sure. There are certainly things you end up learning from that make you a better coach, just like players do when they go through similar experiences. I’m certainly more experienced from it and hopefully a better coach from the previous experiences.

PP: You have stated that the Pakistan bowling attack impresses you. What particularly impresses you about it?

MA: With both pace and spin there is certainly enough depth there for this bowling attack to be very good. Pakistan have produced a lot of good quick bowlers and they continue to do that and they also have some really good spin bowlers and that clearly gives them the advantage and edge at the moment.

PP: You will be working in tandem with three different captains. Do you think that makes your job more difficult?

MA: Yes it does a little bit to be honest. We will assess that. I’ll go in and have a look and discuss it with Inzamam-ul-Haq and see what he thinks is the best way forward and we’ll go from there. Ideally you want two captains as a maximum across the three formats. That’s something we will look at, even if it’s three different captains that can be fine. We will do whatever we think is best.

PP: Do you think Shahid Afridi has a future in international cricket?

MA: Shahid’s been a fantastic player for Pakistan for many years so you don’t discard phenomenal players like that very easily. If we think there is a role for him we will certainly bring him back but that’s a discussion for the future and another time. There’s a lot of cricket to be played before we get to that discussion.

PP: Do you think Pakistan’s struggles in twenty over cricket are partly down to the players not playing in the Indian Premier League (IPL)?

MA: You learn such a lot from franchise cricket tournaments and I think that could be playing a large role. Yes it’s probably right that not playing in the IPL could be affecting the performances of the Pakistan team in the twenty over format.

PP: Pakistan’s cricket followers and the media are an impatient bunch. They will want instant improvement and a rise up the limited overs rankings. Are those acceptable and fair expectations?

MA: It’s certainly not going to happen overnight. It’s a process that we are going to have to look over as we go along. We’ve got to put small goals in place first and get those small goals right and then we can start thinking about setting ourselves some big goals, but it’s going to take some time.

PP: Your predecessor Waqar Younis suggested that the Head Coach should be part of the selection committee. Do you agree with Waqar and is this something that you will push for?

MA: Yes I agree with Waqar. The Head Coach should certainly be privy to the selection panel. Whether he has a vote or not is immaterial because it never really gets down to a vote as it’s normally just a general good discussion. I think the Head Coach has a role to play on that panel but it’s also good in some instances that you have people who are part of the team environment also selecting, otherwise you select for now and forget about the future.

MA: Yes I always like to have goals and targets and set them for myself and the team. But again they will be small and little steps to start with. You have to crawl before you walk or run and I guess that’s where we are at the moment. I will keep assessing those goals as we move up the food chain and obviously the more I’m into the job, the more I’ll be able to assess the goals and standards we want.

PP: Will you be looking to explore Pakistan as a country, the culture, the food and perhaps learn some of the language?

PP: You join as Head Coach at a time when Pakistan has some tough series coming up. Would you agree that there will be no honeymoon period for you?

MA: Yes it’s a busy and a tough time for Pakistan cricket but in that time it allows us to really assess where we are and where we want to go and it allows me a real first-hand look at the players. At the end of this six-month period I will certainly know what needs to be done to take the team forward. 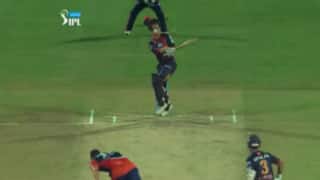