Pakistan need to win the match against South Africa, to have a better chance of qualifying for quarter-final. On the eve of the crucial match, Pakistan skipper Misbah-ul-Haq spoke to the media.

Q: Misbah, a very important game, a must-win situation, so how is the team taking this game?

Misbah-ul-Haq(MUH): Everybody is determined. We all know that this is an important game if we really want to progress in this World Cup. We’re really focused, determined, and looking forward for this game.

Q: Misbah, how do you plan to stop South Africa from scoring 400 to begin with, two matches, two 400s?

MUH: I think our bowling has been really doing well. We are confident that we’ve got bowlers who can really get a wicket against any team. So let’s see. I mean, in the past even we have played against South Africa, these guys played against them in 2013 and 2014 quite a lot, and they know how these batsmen play, and their performances are really good. So hopefully we are confident that we’ve got a bowling attack that can really put them under pressure.

MUH: We are thinking about that. Obviously we have to do something.

Q: How do you view Sarfraz Ahmed? Is he looked at as a third opener?

MUH: How do you look at that? Obviously we are just considering that, and before this in UAE he was just opening the innings. Different conditions, but now we have to just think about that.

Q: We’ve seen South Africa have got two hundred on consecutive occasions; it’s happened a lot in this World Cup. Michael Clarke said that one batsman one day might get a triple hundred in One-Day International cricket. Are we reaching the limit of what’s possible, or do you think we could see even more to come from batsmen and a team get 500 one day?

MUH: Yeah, you never know, because it’s been changing now. The game has been changing. It’s Twenty20 all over the world now, and you might see 10 over or 8 over or something like that in the future, also. Obviously the game is getting shorter, and 50 over score is going to be up in the future, so you can expect anything.

Q: You must have seen that AB de Villiers is sort of unstoppable in this World Cup. Do you have any special plans to get his wicket, and secondly, will you be happy if this game gets washed out and you get a silly point from him?

MUH: You can’t just control weather. You never want to just get into this sort of thinking. You need to really prepare for this game and just assume that it’s going to be the whole game tomorrow and go there with the thought that we can win this game. That’s what we are thinking at the moment, and AB, no doubt, he’s at the moment you could say the best batsman in the world in limited-overs cricket. Obviously we’ve got some plans, and we have good bowlers who can really just put him under pressure, also. But the only way of stopping AB is just trying to get him out. That’s the only way I think. Otherwise if he’s there, it’s not easy to stop him.

Q: Misbah, you are probably the oldest player at the World Cup. Just wondering how you’re feeling. Are you a bit tired, and how do you relate to the younger players in the team because you might be the same age as maybe their dads.

Q: Misbah, you said the game is changing every day, but seems like Pakistan’s approach seems like it’s stuck in the past. None of your top order batsmen have a career strike rate of more than 80. Shehzad looks attractive, but his strike rate is basically 73. Is there any change in approach that you have advised to the batsmen to be aggressive early on?

MUH: Actually we have been losing wickets at the top. That’s why we have to really pull ourselves back. But we are also looking at our strengths. We know that we’ve got a bowling attack where if we cross 250, no team in the world could chase 250.

We have our targets, and we play according to our strengths, and the kind of start we had in the last game, if we can really repeat it against the top sides, we could really manage to score 300. It’s all how you start the game and then how you finish the game, so it’s really important for us to have good starts, then to really just go and score big. 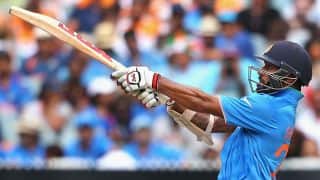 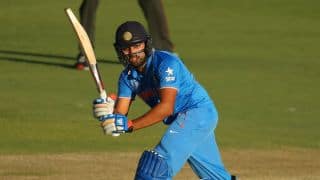