Mitchell Johnson and Brad Haddin have been the heroes for Australia in the Ashes 2013-14.

Mitchell Johnson and Brad Haddin have been the heroes for Australia in the Ashes 2013-14. Nishad Pai Vaidya says that the duo turned the tables around and the set the tone for the series with a spirited rescue act in the first innings at Brisbane.

When England arrived Down Under, who would have imagined a 0-5 whitewash for the tourists? Who would have thought that a rejuvenated Mitchell Johnson would terrorise the Englishmen into submission with his thunderous pace, coupled with the menacing mustachioed looks? Australia’s comeback has been phenomenal; an unlikely story that unfolded spectacularly during the course of the five Tests. Having lost 0-4 in India and then 0-3 during the Ashes 2013 in England, Australia were the underdogs for the contest for the urn, Down Under.

However, the most unlikely stories are scripted by the most unfancied heroes. While, Australia have put in a team effort and numerous players have risen to the occasion in the hour of need. Brad Haddin and Johnson stand out, as they have been the real heroes of this triumph. It is mainly about the way they have comeback to help Australia win the Ashes and it is a tale that should inspire their compatriots in the future. Johnson was mocked and rubbished during the previous editions, but hit back like a juggernaut. On the other hand, Haddin had his share of problems and could only return to international cricket in 2013.

In many ways, Johnson has been the catalyst of the whole victory. He is the only addition to the attack that played in England and he made all the difference. With a small change in his bowling action and the extra pace, England were caught off-guard. During the Ashes 2013 in England, Australia’s attack bowled with spirit, Ryan Harris leading the way. However, they lacked the extra punch and Johnson did fit into the puzzle perfectly. His 37 wickets in five Tests tells the story, but more than the scalps, it is more about the fear he instilled during the series.

One could feel the need for the Englishmen to get off strike while facing Johnson. The searing pace, coupled with bounce had them in all sorts of problems. For Johnson, it is a resurrection. He had this unpredictable aura around him and hadn’t been a fixture in the Test side. With this performance, he had made a good comeback and should be a force to reckon with for some time.

Earlier this year, Haddin made a comeback during the Ashes in England and had to endure the heartbreak of losing the Nottingham Test by 14 runs. The rest of the Ashes was a forgettable experience for him and the team. So, when the series commenced Down Under, Haddin was in a different mould. England did have Australia in trouble a few times, but Haddin stood tall in every Test and scored at least a fifty in each game.

The duo combined together in the first Test to set the tone for the rest of the Ashes. When England reduced Australia to 132 for six on Day One at Brisbane, many felt it would be the same old story all over again. Haddin and Johnson had other ideas. In tandem, they scripted a 114-run stand that helped Australia come out of the muddle. Johnson scored 64, while Haddin missed his ton by a mere six runs, as he stretched Australia to 295. That was where it all started for Australia and at times, one may overlook such small moments in context of the series. However, such passages of play may have an unmistakable impact on the series.

Australia have shown their typical ruthlessness that was supposedly missing all the while. Perhaps, it was just a lull in the post transition era and any side would take its time to find its feet. But, this 5-0 victory is a platform for the Aussies and Michael Clarke to build a formidable side. This team is well and truly back to its old ways. 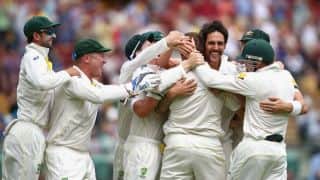