Johnson has brought back into fray the most effervescent vignette of the game.

Now he is going through the best spell of his career, helping the Aussies regain the Ashes when almost everyone wrote them off. He was the fiend with a big moustache, breathing fire in Australia and now he is the torrent which has washed away the South African batting twice.

You never know what a world of confidence could do. Right now, Johnson has stashed away bales of that ingredient hitherto in scant, and much of it has rubbed off on everyone around him. We could very well be looking at a big streak if he remains fit- bigger than the effect that an Ian Botham or an Andrew Flintoff had on an Ashes series — possibly, of the scale that Novak Djokovic enjoyed in 2011, until Roger Federer outdid him after 41 unbeaten games.

Suddenly with the re-emergence of Johnson with his accentuated pace and aggression, Test cricket has got something back — call it anachronism given today’s upheavals in the game but it has got back its archetype — the fast bowler, the phenomenon which charges in, with the crowd behind him and bowls his heart out and rings alarm bells and death knells for the batsmen.

Dale Steyn was devastating but somehow has not cast a spell that Johnson has. James Anderson failed to leave batsmen hopping in the crease. It is with Johnson regaining his paradise that cricket, Tests per se, has had its equilibrium upset, and there is some flux towards new world order.

This is a good thing to happen after series like the seven-match ODI series the Australians played in India last year. That series was a bad advertisement for the art of bowling. No Indian kid would have aspired to become a fast bowler. Quite visibly, it was bat versus bat. The pitches were curated for run fests.

But much of it lies with the mindset of the rest of the game, not just from India. A batsman seems to be the more dignified one in the park — less effort and more or less, the best of results. A pacer has to do much of the hard work, and sometimes get the least of returns, always with the vultures of injury circling above, waiting for a step to be taken wrong or that extra bit of load on his limbs. The fast bowler is the one who can win matches for his side anywhere.

Cricket has its own share of jingoism. Any talk about the greatest cricketer is mostly defiled into naming two or three batsmen. A testament to this is the fact that, out of the five Wisden Cricketers of the Century, three are pure batsmen, one is an all-rounder and one is a leggie (A rare win that for the bowlers). Unfair, but that is how the game has always been played.

Steyn would be rearing to get back amongst the wickets. It shall be left to cricketing lore and Father Time to decide the course of the series, but right now, with a beast prancing into the 22 yards, the game is definitely ON. Chin music, perfume balls, and mental disintegration — all these will come back into the fray. This is the most effervescent vignette of the game. This is the very quintessence of cricket — fast bowling. 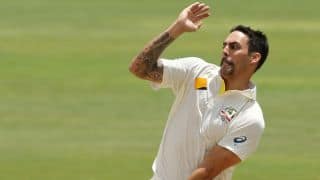