Born October 20, 1991, Mitchell Ross Marsh is an Australian cricketer who is reckoned as one of the most talented Australian all-rounders at the moment. Marsh is primarily a middle-order batsman but can bowl at a decent speed and chip-in with vital wickets. His prowess in the Twenty20 (T20) cricket is well-known and has had a decent run in his sporadic appearances in the longer formats too. On his 24th birthday, Criclife lists down 12 interesting things about Marsh.

1. Football: Before focusing solely on cricket, Marsh had a keen interest in the game of football. He was an Australian rules footballer and played the game for Western Australia in 2008 AFL National Under-18 Championships.

2. All-rounder: Marsh belongs to the rare breed of effective all-rounders in contemporary cricket. He has the ability to take on any bowler with his unblemished hitting in the middle-order and has been very handy with the ball in hand. He bowls at a menacing speed and has the ability to clock 140 kmph on a consistent basis.

3. Sporting Family: Marsh hails from a sporting family. His father Geoff has represented Australia in the past whereas his elder brother Shaun too has the baggy green to his name and is still active on the international scene. On the contrary, his sister Melissa plays football for Perth Lynx in the WNBL.

4. Young gun: Marsh became the youngest cricketer to feature in the Australian domestic One-Day tournament when he represented Western Australia at a tender age of 17. He also became his team s youngest debutant for over 70 years.

5. WC performance: Marsh successfully led the Under-19 team in the 2010 World Cup in New Zealand and won the coveted trophy. His performances in the knock out stages were quite impressive.

6. T20 hero: Marsh is a tagged T20 specialist. His maverick approach and ability to hit the ball long has earned him accolades on several occasions. He has featured for Deccan Chargers (DC) and Pune Warriors India (PWI) team in the Indian Premier League (IPL).

He represents Perth Scorchers in the Big Bash League (BBL). He has hit four fifties in his Twenty20 career, all coming for the Scorchers.

7. Last ball hero: On September 20, 2014, Marsh hit two sixes of last two balls and got his team Perth Scorchers an improbable victory over the Dolphins in the now defunct Champions League T20. He smashed consecutive sixes off Robbie Frylinck’s final over and helped his team beat Dolphins by six wickets.

8. Ashes: In Ashes 2015, where Australia suffered a dramatic defeat at the hands of England, Marsh was brought in to the side in the Lord s Test ahead of Shane Watson. Although he did a reasonable job with the ball in the three Tests by taking 8 wickets, he failed miserably with the bat. In five innings, he could manage only 48 runs.

9. Man of the series: After a poor outing in the Ashes 2015, Marsh bounced back emphatically in the One-Day International (ODI) series against England. He won the Man of the Match award in the second and the fifth ODI and also had Man of the Series to his name for a terrific and outstanding overall display during the entire series. In five outings, Marsh claimed 8 wickets at an average of 24.12 and scored 134 runs at a staggering average of 44.66.

10. Decimated England in the 2015 World Cup: Marsh stunned the cricketing world with a scintillating exhibition with the ball in the 2015 World Cup Pool A match against England. He bowled with unmatched confidence and dismantled England for a mere score of 231 while defending 343 in 50 overs. He chipped-in with 5 wickets and gave away just 33 runs in his nine overs to see his side emerge victorious. In fact, this is also is finest performance in ODI cricket till date.

11. The injury: Marsh, who had continued playing despite a shoulder injury, had to stop playing and head back home from India in 2017. The injury got worse to sideline him for a span as long as nine months. His shoulder needed a full reconstruction.

12. Western Australia captaincy: During his lay-off time, his performance in the domestic matches after recover earned him captaincy of Western Australia in 2017 for JLT Cup, where he would feature only as a batsman due to the problems in his shoulder. 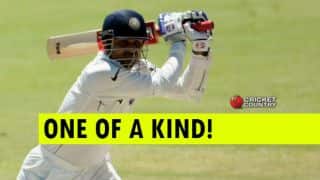 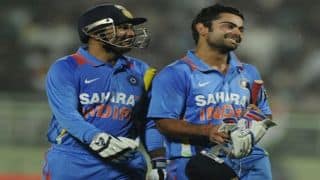 Virat Kohli: Pleasure to have played with Virender Sehwag