Moeen Ali became the thirteenth Englishman to record a fastest ODI 100 in the top 100 list.

Moeen Ali smashed the second-fastest century for England in ODIs against West Indies at Bristol, thus breaking a monopoly set by Jos Buttler (the top three slots belonged to him). Moeen s 52-ball century might not be the fastest but it certainly set the ball rolling on the debate about how conditions have become more batsmen-friendly Smaller grounds, pulled-in boundary lines and advent of Twenty20 cricket.

Moeen became the thirteenth England player to find an entry in the list of the 100 quickest ODI hundreds. India lead the ranks with 19 players in the list, Pakistan are a close behind with 15. South Africa and England are joint with 13. Sri Lanka come in with 12, while New Zealand (11)are just ahead of the their Trans-Tasman rivals Australia (10).

This is Moeen s second appearance in the list. There are players who have done it more often. AB de Villiers and Sanath Jayasuriya make 8 appearances each. Virender Sehwag has 6 while Adam Gilchrist, Buttler and Shahid Afridi have 4 each.

Most appearances in fastest ODI centuries in top 100

Talking about playing conditions, smaller grounds in India, New Zealand and England means more and more opportunities for players to attain centuries. Out of the top 100 fastest centuries in ODIs, 20 have come in India. New Zealand is at second spot but is far behind with 11. Lately, England (10) has seen ODIs being played at non-traditional grounds that are comparatively small.

Numbers of hundreds (in Countries) in top 100 fastest century list

Here s the list of fastest centurions in ODIs (Top 10)

De Villiers rules the roost with a century in merely 31 balls. He is closely followed by Corey Anderson, who broke Afridi’s (37 balls) 17-year-old record by 1 ball. India’s fastest century is held by Virat Kohli (52).

*record updated upto the completion of England vs West Indies game at Bristol on September 24,2017 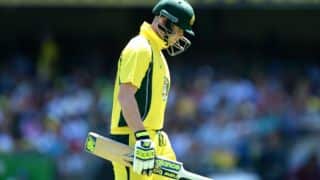