Moeen Ali took two wickets in the final session on Day Four to give England the advantage in the third Test at Southampton. In the process, he became the bowler with the best strike rate for England in the series. Shiamak Unwalla looks at how someone who was considered a mere part-timer has become the bane of the Indian side.

There are some stereotypes in cricket that aren’t easily broken. Australians are often clinical. South Africans are consistent, but are “chokers” in knockout games. West Indies play with that typical flair. Pakistan is a factory of fast-bowling which produces masters of reverse swing. And Indians are great players of spin. Indian batsmen have traditionally suffered in England. The conditions are far from familiar. The ball swings a lot and bounces more; the pitches are quicker. English fast bowlers are hostile. And of course, India do not play pace too well in conditions that aid that kind.

And yet, of the four Indian wickets that fell in the final session of Day Four, three were to spinners. The other was a run-out. This on a deck flat enough that England could pile on 569 without being bowled out. The pitch holds no demons. So far in the second innings, the pace bowlers have bowled without success. One of them — Chris Jordan — bowled without any direction either.

That India is four wickets down is due to a run out, Shikhar Dhawan’s questionable technique, and Moeen Ali; that enigmatic part-time tweaker who no one expected to succeed against a line-up that is historically adept at playing spin. What Moeen has done repeatedly in the series is take periodic wickets. What India have done consistently, is play him badly.

Two shots played by two different batsmen immediately come to mind. Stuart Binny tried to hoick him away for a six very early on in his innings in the second Test at Lord’s, and holed out in the process. And then Virat Kohli, showing him tremendous respect, kept blocking till one of his forward defensives found the edge.

In both these cases, the batsmen played Moeen particularly badly. Binny perhaps thought that he was not good enough to bowl, and tried to dismiss him from his presence. Kohli held him in such high esteem that he played him with a view to defend rather than score runs. India has been dealing with Moeen in extremes throughout the series. They have either been overly aggressive or overly defensive against him, and have just not played him on his merit.

To be fair to Moeen though, he has bowled consistently and accurately. He is proving to be a more than useful off-spinner, and certainly a long-term all-round prospect for England. That being said, he still has a long way to go with both bat and ball, but he has shown enough to be taken seriously as a bowler — just not as seriously as Kohli did. 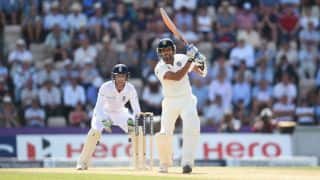 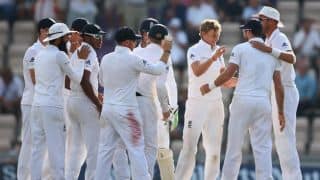