The Board of Control for Cricket in India (BCCI) today ordered the Krishnamachari Srikkanth-chaired selection committee to bring back Mohammad Azharuddin and wicketkeeper Syed Kirmani for the Adelaide Test. Azhar will also captain the side in the absence of Dhoni, who is facing a one-Test ban. 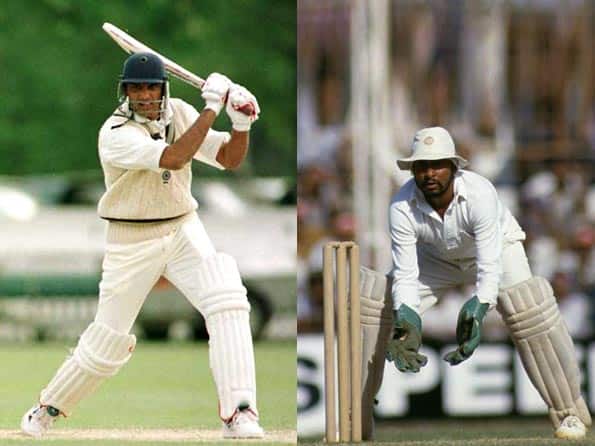 Thanks to the BCCI, Azhar (left) and Kirmani have got belated recalls in their careers to allow them complete important milestones in Tests © Getty Images

The Board of Control for Cricket in India (BCCI) today ordered the Krishnamachari Srikkanth-chaired selection committee to bring back Mohammad Azharuddin and wicketkeeper Syed Kirmani for the Adelaide Test. Azhar will also captain the side in the absence of Dhoni, who is facing a one-Test ban.

Srikkanth admitted at the press conference that it was a little surprising to receive the directive because the BCCI never interferes in selection matters. Srikkanth, however, hastened to add that he fully supported the selection of Azhar and Kirmani. He believed that seniors like Azhar and Kirmani will bring in the much-needed stability to the Indian side. “Just look at their records!” he is supposed to have said.

Insiders, though, have given a different explanation. In the face of the mounting criticism of giving Sachin Tendulkar unending opportunities to score his 100th international century, the BCCI felt that it was time to mute the criticism. As most Indian cricket fans are aware (probably not fans of this century), Azhar has played 99 Tests for India. He was dropped before he could play his 100th Test. Playing the Adelaide Test would give him the opportunity to get to that landmark and fully rehabilitate him.

Azharuddin, meanwhile, has put in a special request to Cricket Australia (CA) to bowl only spinners against him. He wants to get to a century. Scoring a century as captain will also be a landmark as it would be his 10th century as captain.

Some of the seniors in the present Indian team had apparently protested this move. Further investigations have revealed that its because Azhar is still fit and fields with agility. He throws himself on the field and makes diving saves, though he will be 49 in a few weeks time.

In the negotiations with Azhar, BCCI has gained agreement from Azhar that he would field and run between wickets like any normal Indian senior. He will now amble across for runs and convert sure threes to twos. He will also not make diving saves or field in positions of high visibility such as point or cover. He has agreed that fine-leg or third man would be his “hiding places”.

Kirmani’s case is a little more straightforward. Kirmani was stranded on 198 victims when he was axed to make way for Baroda ‘keeper Kiran More. The BCCI decided to right that wrong by giving him a chance to pouch the two victims he needs to get to the 200 victim mark. Dhoni’s one-Test ban makes Kirmani’s re-entry relatively easy. Dhoni, though, has asked Kirmani not to bog down the scoring rate by wasting too many balls.

The real culprits behind the Dhoni-Sehwag rift

Many commentators see a conspiracy in this advice from the non-captaining captain. They believe that given Dhoni’s penchant in Australia not to last more than 20 balls per innings, Kirmani’s doggedness might get fans nostalgic and force Dhoni to change his style for Test matches. Dhoni has vociferously defended his and Virender Sehwag’s natural styles. Commentators point out that Sehwag has two triple centuries with his natural style, while Dhoni is averaging below 40 in an era of sky-high averages. Dhoni is said to be upset at this comparison and has accused commentators of causing a rift in the team between him and Sehwag.

BCCI has done a lot of market research before coming up with this brainwave. They believe that India’s reverence for people of advanced age is a genuine market characteristic that can be exploited. They cited examples of the Indian cabinet, Prime Minister and as well as Opposition leaders being seniors. In fact, BCCI itself is remote controlled by “senior defender” in chief Sharad Pawar. Numerous examples of past prime singers, actors and sportsmen were given.

Stay tuned for more moves by BCCI to assign God-like status to all past cricketers. UP Chief Minister Mayawati is said to be considering constructing statues for all those attaining senior status.

Latest indications are that Gautam Gambhir is in negotiations to be declared a senior of the team. This will allow him to continue to be in the team based on past record and not be under pressure any longer to win matches for his team. The coveted status will also allow him to skip important Test series.