In a Test marred by terrible umpiring, Mohammad Azharuddin carved out a dazzling fourth-innings performance.

January 29, 1992. Mohammad Azharuddin walked in at 102 for 4, requiring 372 for a win on the last day at Adelaide, having managed a mere 61 runs in the last six innings. And he almost worked a miracle. Arunabha Sengupta remembers the sublime innings that took India this close to an impossible win.

January 29, 1992. His scores till that point in the series against Australia read 10, 12, 22, 2, 4 and 1. He had demonstrated a remarkable penchant for getting out to incredible edges, unbelievable catches and sometimes questionable decisions. A superbly-timed trademark flick had been lapped up by David Boon in the short leg in a curious dive and juggle effort. One flick had curiously gone off his hips, all the way in the air, down the throat of deep fine leg. In the first innings at Adelaide, he had been one of the many leg before dismissals that would dog India till the end.

Mohammad Azharuddin was having a torrid time. And the manner of his dismissals, some of the most curious jokes by the gods of fate, did not win him much sympathy. After all, he was the captain of a side that was losing badly — 0-2 down after three Tests and on the back-foot in the fourth. Indian fans and media seldom have much patience for such struggling men, no matter how infinitely touched by greatness. Criticism dogged him at every step.

Now, as he made his way to the crease at 102 for 4, Dilip Vengsarkar having just fallen to yet another questionable decision, the target of 372 looked an impossible peak to climb. It had been more than disappointing. The Indian bowlers had dismissed Australia for 145 in the first innings. Four-leg before decisions had pegged them back in their attempt to build a lead, but India had still managed 225. In the second innings, Kapil Dev had dismissed Geoff Marsh and had hit the pad of David Boon bang in front of the stumps. The loud appeal had elicited a signal for leg-bye as a response. A distraught Sunil Gavaskar had commented over the microphone, “That could have missed the off, could have missed the leg, but would have definitely hit middle.” Boon had gone on to make 135, and Australia 451.

Now, on the final day, hardly anyone expected much of a fight. After all, it was clear to the many experts that Azhar, for all his success in India and England, would never succeed on the bouncy Australian pitches.

Azhar tickled one fine to get his first boundary and batted sedately till lunch. At the other end Sanjay Manjrekar was just about managing to survive.

There was a sudden transformation as the Indian captain walked out after lunch. Shane Warne was driven through mid-off for four and then cut behind point for another boundary. The inexperienced leg spinner followed it up with a full toss nonchalantly dispatched to the midwicket fence. Every stroke a caress, rather than a hit.

Fortune, which had treated him with untold harshness thus far in the tour, finally stood firmly behind him as Mark Waugh floored a simple catch at short-cover. The ball from Warne had not turned and Azhar had tried to drive him through the off.

However, the luck was back with Australia soon enough. With the score on 172 for 4, Manjrekar engineered his own dismissal, trying a run off a misfield by Marsh. Ten runs later, Kapil steered Merv Hughes into the hands of gully.

With Manoj Prabhakar having walked in to join him, Azhar now took on Hughes. Three boundaries flowed in one over, each more delightful than the next. A drive on the up through the covers followed by two splendid flicks past square leg. Finally his bat was raised — his first fifty of the Test series arriving with 11 fours and 8 singles.

By now, pacers and spinners were being treated with equal disdain. Warne was dispatched through the off, Mike Whitney threaded through the on. Craig McDermott was driven to the extra-cover fence and cut to the point boundary.

Captain Allan Border now tried to set a trap on the leg side, with two short legs, a short mid-on and a short mid-wicket, waiting for the uppish flick. Azhar negotiated the balls on the leg and middle with pushes. And when McDermott erred by pitching outside off, a sublime square cut crashed it into the point fence.

And as Whitney bowled across him with two gullies in position for an edge, Azhar picked him from the stumps and with a turn of the divine wrists guided him past mid-wicket for four. Prabhakar was standing firm at the other end and Azhar was into his nineties.

As the teams went in for Tea, India needed 120 more in the final session. And the way Azhar was batting, the possibility had suddenly emerged on the cards like a conjuring trick from his wand like willow. The Indian captain was on 91.

After the break, Azhar caressed a cut off Warne to get to 97. With the partnership into the eighties, Border came in to bowl his left-arm slows. He started with a full-toss on the pads and it was whisked away past mid-wicket and Azhar ran three to bring up one of the most visually pleasing hundreds ever scored in the country. It came off just 144 balls, and contained 17 boundaries. A superlative innings under pressure, made special by the aesthetic beauty that glowed from each stroke.

At 283 for six, the partnership already worth hundred in just 87 minutes, Australia took the second new ball the moment it was due. Craig McDermott pitched the fourth ball up on the middle stump, almost a yorker. Azhar, as he had been doing all along, tried to caress it through the on side. But this shining cherry swung a bit more and took the edge. Mark Taylor hung on to the fast and low catch in the slips. A great innings came to an end for 106. Even the normally prosaic tomes of Wisden was moved enough to record, “The captain’s drives, effortlessly struck, wristy cuts and deflections off the legs blended into the elegant splendour of the Adelaide Oval.”

Azhar walked back after three hours of sheer magic.

Chandrakant Pandit did not last long, but adrenaline was rushing inside Manoj Prabhakar by now. With Venkatapathy Raju hanging on stubbornly, he pushed the score along. The final hour started with 64 to get and two wickets in hand. A couple of boundaries followed and it was down to 48 required off 11 overs. And when Raju belted McDermott straight back to run three, the miracle seemed destined to take place.

However, the next ball struck Prabhakar on the front pad — many still reckon a huge inside edge was involved. Up went the Australians, and up went the finger as well. The Indian challenge fizzled out to some very questionable umpiring. Soon after that, Javagal Srinath skied one to mid-off to give McDermott his 150th wicket. India finished at 333, losing by just 38 runs.

Man of the Match: Craig McDermott. 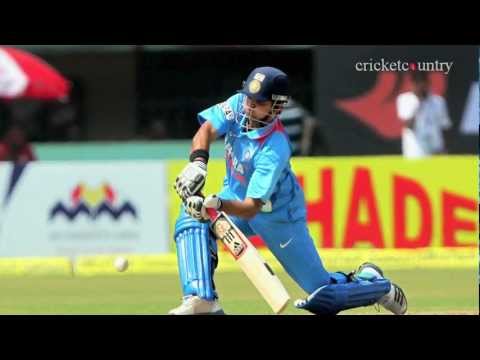