The towering six-feet-ten-inches tall Mohammad Irfan, a 30-year-old fast bowler who will be touring with the Pakistan team to India, is bound to be the centre for attraction on the trip. The towering six-feet-ten-inches tall Mohammad Irfan, a 30-year-old fast bowler who will be touring with the Pakistan team to India, is bound to be the centre for attraction on the trip. PakPassion.net’s Amir Hussain caught up with the giant recently.

There aren’t too many sports rivalries existing in today’s world that come close to matching Pakistan-India cricket matches. A rivalry that has withstood the test of time and even the lack of recent matches – the two sides haven’t played each other in a series for almost five years – has only served to fuel rather than stifle the intensity. This will, no doubt, be at the forefront of the minds of players of both teams during the five-match limited overs series which kicks off in Bangalore in a couple of weeks’ time.

The Pakistani team is scheduled to touch down at Bengaluru International Airport on the 22nd of December and amongst them will be many names and faces we have come to associate with Pakistani cricket. However towering, quite literally, above those big name players and no doubt causing a ripple of excitement amongst onlookers as they set their gaze on him for the first time will be the 6ft 10in fast bowler Mohammad Irfan.

Hailing from rural Punjab, the 30-year-old fast bowler has been terrorising batsmen on the domestic circuit and will cut an imposing figure as he accompanies his senior teammates to only the second international tour of his career. Irfan will hope the natural advantage offered by his height will induce apprehension amongst the ranks of Indian batsmen as he looks to replicate the success of other lanky members of the fast bowling fraternity that have played international cricket. Mohammad Irfan will be aiming to utilise more than just his height though — it’s his ability to persevere against odds that has gotten him so far and will stand him in good stead for the upcoming series.

Those following the fortunes of Irfan will be keenly aware of the highs and lows he has faced during his fledgling first-class career. From the highs of being plucked out of obscurity by Aaqib Javed upon recommendation of his coach Nadeem Iqbal, to being named and subsequently removed from the squad for the 2010 ICC T20 World Cup followed by a lacklustre T20 International debut against England in 2010, there isn’t much that can put off Irfan in his quest to pursue his dream of becoming an international cricketer.

Obviously delighted by the prospect of playing for his country and brimming with confidence, Mohammad Irfan in exclusive remarks to PakPassion.net spoke of his delight at being named in the 15-man squad that will represent Pakistan in the two match T20I series. “I have always worked hard and put my faith in the hands of the Almighty, but I was very tense as I watched TV when they announced the team. It was really quiet when the announcement was being made but the telephone hasn’t stopped ringing since,” said Irfan when asked about his selection.

Irfan may not like to admit it, but the painful memories of his debut in England when he was plucked from the Pakistan A squad playing in Sri Lanka and thrust into the first team within hours of a gruelling flight, must linger. He indicates there were issues at the time. “I was put under tremendous pressure in that game as I was flown in and then asked to play at short notice. I was suffering from jetlag and had fitness issues, and of course I was also nervous. All these issues affected my performance, but all that is in the past. I have worked very hard and if given the chance, I will be ready for the big occasion.”

With 11 wickets at an average of 13.9 and an economy rate of 5.88 in the Faysal Bank T20 competition and good form in the recently concluded President’s Trophy, Mohammed Irfan’s aggressive fast bowling has made the selectors sit up and take notice. Pakistan head coach Dav Whatmore and bowling coach Mohammed Akram are known to be great admirers and as Irfan indicates, have provided him with valuable advice.

“Dav Whatmore came to see my games in Islamabad during the President’s Trophy and spoke to me there. He provided me with a lot of confidence for which I am really thankful. I have spoken to Mohammed Akram on many occasions. They have been very happy with my bowling and also given advice to me on my physical fitness and bowling. I am also grateful to my coach and mentor Nadeem Iqbal for his constant encouragement. He has always been convinced that I will make a comeback to the international side but for that to happen I needed to persevere and work on the same techniques that had got me this far — there was no need for any significant changes. The result of his advice has been that I have been selected for this important tour,” said Irfan. Hailing from rural Punjab, the 30-year-old fast bowler has been terrorising batsmen on the domestic circuit and will cut an imposing figure as he accompanies his senior team mates to only the second international tour of his career © Getty Images

Almost two years after his debut for Pakistan, Irfan has shown improvement and is feeling confident. “I have been concentrating on my physical fitness as well as fielding. As you know, with my height, I need to work a little more to be able to field well, but the main thing for me is that I have a lot of confidence in my own ability. Physical fitness was also an issue in my last international game and hopefully that will not be a problem if I am chosen to play, as I have been following a fitness plan assigned to me by the coaches. I don’t feel any tension or pressure as this time around, I feel much better prepared and I am joining the team on the back of some good performances.”

The prospect of playing against India at any venue must be a highlight of any Pakistani player’s career and Mohammad Irfan is suitably excited about this challenge. However, with his new-found confidence, he seems undaunted by the idea of facing the world champions. “I have got hold of some videos of Indian batsmen, so I can start planning against them but the real work will come when I join the preparatory camp.”

Whether Irfan actually gets another chance to represent Pakistan will depend on a variety of factors, but he must draw the positives from the faith shown in him by the selectors and team management after his inclusion in the T20 squad. For Irfan, this series represents an opportunity to establish himself as an international bowler, a fact that he readily acknowledges. “This is a big opportunity for me and I hope I can contribute and become a regular member of the team, but I also know that I wouldn’t be here in the first place without the help of the Almighty and the good wishes of loyal fans for which I will always be grateful.”

Pakistan commence their tour of India with two T20 Internationals at Bangalore and Ahmedabad on the 25th and 27th of December, respectively, followed by three ODIs on 30th December, 3rd and 6th January 2013. 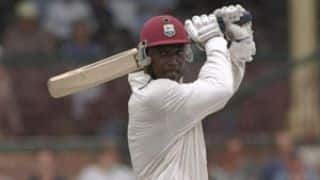 Carl Hooper: An enigma who could have done a lot more at the highest level