Mohammad Shami’s performance on Day Three helped India seal an innings win against West Indies. He bowled well with the old ball and it was his reverse swing that made the difference. Nishad Pai Vaidya examines Shami’s spell in the game and studies an interesting pattern. 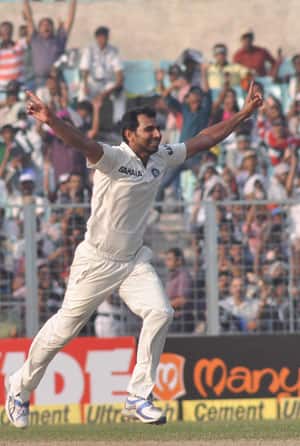 Mohammad Shami’s performance on Day Three helped India seal an innings win against West Indies. He bowled well with the old ball and it was his reverse swing that made the difference. Nishad Pai Vaidya examines Shami’s spell in the game and studies an interesting pattern.

Mohammed Shami has been terrific on Test debut — bowling India to a win on a track that didn’t have much for the seamers. His match figures of nine for 118 are the second best figures by an Indian debutant, second to Narendra Hirwani’s 16 for 136. That his figures are the best by an Indian fast-bowler on debut speaks volumes of his efforts and throughout his spells. He showed good temperament and planned his bowling. While Rohit Sharma’s stellar innings may have won him the Man of the Match, it would be fair to say that Shami too deserved the honour given the challenge before him.

The most interesting phase of Shami’s spell was when he came up against Shivnarine Chanderpaul during the second innings. Chanderpaul’s stance can unnerve a bowler. The open chested initial stance then turns into a walk across the stumps. Someone bowling to him the first time may lose his line. But, Shami planned his line. He bowled it full and on the stumps most of the time to keep Chanderpaul quiet.

That was proof of the fact that Shami gives a lot of thought to his bowling and isn’t fazed by reputations.
The detail that would excite most Indian fans is that six of his nine dismissals were bowled. He kept targeting the stumps and hit them on a consistent basis. It was the movement, couple with the brisk pace that did the batsmen in. And, throughout the game, he showed good skills with the old ball — purchasing good reverse swing and tricking the batsmen. Let us revisit each wicket he took during the game:

Shami’s first wicket in Test cricket came after he had maintained the pressure on the openers during the first innings. Bhuvneshwar is only military medium and the batsmen had to adjust to Shami’s extra pace. He pitched it short and it climbed on Powell by the time it reached him. He was shaping to pull, but the ball came quicker and he managed to spoon a catch to mid-off.

Samuels was a well-set batsman and was seeing the ball very well. He was using his feet to the spinners and had got his timing right. Yet, Shami deceived him with one that came into him. Samuels was locked at the crease and by the time his bat came down, the ball had clattered into the woodwork. It did highlight Shami’s skill with the old ball. There was more to follow.

An action replay of the Samuels dismissal. Shami pitched it in a similar area and it moved in enough before Ramdin could do anything about it. Same result!

Pitching it up to a tailender, Shami got his rewards and finished the job for India.

Samuels again fell to the movement and pace, although the decision by the umpire was poor. Shami pitched it a lot straighter and it moved into Samuels and he couldn’t get his bat down in time again. The ball did move quite a lot and was going down leg. The old ball was on show again!

This wicket would have given Shami a lot of satisfaction. He worked Ramdin out and had pushed him back. He then placed a forward short-leg and Ramdin only inside-edged it onto his pads and to the fielder.
Darren Sammy b Mohammed Shami 8

Sammy was foxed by the movement. Shami was on song and there was nothing that could stop him. Sammy misjudged the length and it sneaked through his defences.
Shane Shillingford b Mohammed Shami 0

Pitched it full and there was that movement again. Shillingford was castled by the ball that came into him.
Sheldon Cottrell b Mohammad Shami 5

The icing on the cake! Having snared the more superior batsmen, Shami now finished the game for India by using his main weapon to bowl Cottrell out. It was his fifth wicket as well.

One can see a common thread to all the dismissals. It was the incoming delivery that he used well during the game. That is his stock delivery, a lethal incoming delivery that comes in at a brisk pace. That has made the difference for him as the other fast-bowlers were nowhere close to successful. Here is a comparison between Shami’s match-figures and the combined stats of the other fast-bowlers:

Shami picked up five more wickets that the other fast-bowlers took (combined) bowling a fifth of their overs. And, these figures have come on a dusty surface that was more suited to the spinners. It has truly been a fantastic spell and one that would stay with him. This is a good confidence boost for him and the team ahead of the South African tour. He may relish bowling in more helpful conditions.