Mohammed Shami: An incredible journey from Sahaspur to the Indian dressing room

Mohammed Shami: An incredible journey from Sahaspur to the Indian dressing room

Shami s journey began in the fields of Sahaspur, a distant village near Moradabad.

After his match-winning performance against West Indies at Feroz Shah Kotla, Mohammed Shami once again grabbed the headlines. Undoubtedly one of the greatest treasures of contemporary Indian cricket, it has been a tough journey for the boy from a remote village of Uttar Pradesh (UP). Sandipan Banerjee narrates the hardships borne by the man.

Biopics are the in-thing in Bollywood. From Milkha Singh to Mary Kom and, most recent, MS Dhoni, it seems that the producers are quite ready to invest on stories that depict the struggle of a sportsperson. If the trend continues, one cannot be surprised if he comes across another movie of such kind in near future the life story of Mohammed Shami, India s bowling spearhead of the moment. His incredible journey from a remote village of Uttar Pradesh to the Indian dressing room has every spice which is required for a biopic.

Shami s journey began in the muddy fields of Sahaspur, a distant village near Moradabad. Till he came into the scene, Sahaspur was more famous for its sugar-mills. Sahaspur never dreamed that she would produce a success story sweeter than any sugar she had produced that of a thin and shy young boy who had already made a name known for bowling fast.

The son of Touseef Ahmed, also a fast bowler in his young days, Shami inherited the skills of bowling fast from his father and uncle. Though neither Touseef nor his brother played cricket at higher levels, they were renowned for their bowling abilities.

Touseef made up his mind when he came to know about his son s abilities: this talent needed to be nurtured. A sufferer himself, he knew that playing tennis ball cricket at Sahaspur would not help his cause at all. Touseef took his 15 year old son to Badurddin, a cricket coach in Moradabad, almost 22 kilometres away from Sahaspur.

Badruddin recalled those days in an exclusive chat with CricketCountry: When I first saw him [Shami] bowling at the nets as a 15-year-old kid, I knew this boy is not ordinary. So I decided to train him. For one year I prepared him for the UP trials, as we don t have club cricket over here. He was very co-operative, very regular and very hard working. He never took a day off from training. During the under 19 trials he bowled really well, but due to politics, he missed out on selection. They asked me to bring him next year, but at that moment I didn t want Shami to miss one year. So I advised his parents to send him to Kolkata.

Leaving his parents and traveling to a place where he knew no one was probably the hardest decision a 15-year-old can take in his life. However, it was this decision that eventually went on to change his life.

It is very hard for newcomers without proper contacts to get the opportunity to play for any of the big clubs like Mohun Bagan or Kalighat. So Shami (he was known by this name that time) had to play for the lesser known Dalhousie Athletic Club. While playing for this club, Shami was noticed by the general secretary of Town Club, and a former assistant secretary of the Cricket Association of Bengal (CAB) Debabrata Das, who his renowned in the Maidan as an avid cricket lover. That evening was probably the turning point of Shami s career.

When CricketCountry contacted Das, he was very happy to share the story: It was the Rajasthan ground, where I first saw him. I was surprised to see the skills. [He was] a medium height bowler who was bowling brilliantly at that time: smooth run-up, smooth action, straight seam. That was probably the last match of the season for Dalhousie club and his commitments for them were almost over. Then and there I selected him for my team. His contract was Rs 75,000 per season and Rs 100 per day for food.

That became Shami s first major contract. But there was one problem: Shami didn t have a place for staying in the city. Das solved this problem. For me, my cricketers are like my sons. I always take care of them. When Shami said, mai rahunga kaha? (Where will I stay?), I took him to my residence and said, you will stay here.

Shami started playing First Division League for Town Club where he impressed everyone. Das recalled: That season Town club did well. Shami, especially, was very impressive. He loved to eat biryani, so whenever we needed a wicket, I used to shout, Ek wicket, ek plate biryani (a plate of biryani for every wicket) and he always obliged us with wickets. I insisted the Bengal selectors to take him in the Under-22 team that season but as he was not playing for any of the big clubs, they didn t take him. Then I went to Sambaran Banerjee, who was one of the selectors at that time, and just asked him to watch Shami s bowling once.

Banerjee was impressed by what he saw. Being reputed as the man who had given Sourav Ganguly his break in First-Class cricket, Banerjee has always been a reputed talent-spotter. Shami was selected for Bengal s squad for Vijay Hazare Trophy that year.

However, thanks to the politics that prevailed in Bengal cricket, Shami needed the back-up of one of the big clubs to make it to the XI. I advised Shami to play for Mohun Bagan next season. He was very emotional when I asked him to leave Town Club and play for Mohun Bagan, but I somehow convinced him, Das reminisced.

Shami moved to Mohan Bagan next season. One day he got the opportunity to bowl at Ganguly at the Eden Gardens nets. ‘Dada‘ immediately spotted the talent of the young boy and asked the selectors to take special care of him. Shami never looked back after that day. He became a regular member of the Bengal Ranji Trophy team. He had a decent One-day International (ODI) debut against Pakistan.

Finally, a dream Test debut against West Indies at the Eden Gardens (he took nine wickets) gave Shami s life the destination it so richly deserved. One can only hope that the first year of his Test career is an indication of things to come by.

The shy teenager that had once boarded the train for Kolkata from Moradabad to pursue his dream is now perhaps the most important member of Indian bowling attack. The man who once lived on 100 rupees a day now owns a BMW and a luxury flat in a prime location of Kolkata.

Despite the glory and the glamour, Shami continues to remain the down-to-earth, soft-spoken person who never forgets to visit his old club and old teammates whenever he is in the town. Maybe that is what champions are made of. 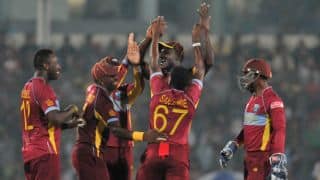