Going by the reams of newsprint and air time devoted to India’s ever-depleting bowling resources during the recent ODI run feast against the Aussies, Mohammed Shami’s performance in his breakthrough Test was as reinvigorating as finding an oasis in the Thar. 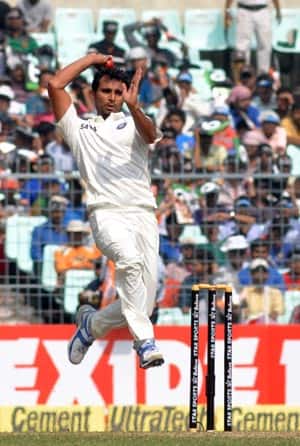 Going by the reams of newsprint and air time devoted to India’s ever-depleting bowling resources during the recent ODI run feast against the Aussies, Mohammed Shami’s performance in his breakthrough Test was as reinvigorating as finding an oasis in the Thar.

Bowling with the old ball is one thing, getting it to reverse at will is another. Shami did both — and much more — to finish with a match haul of nine wickets as India wrapped up the first Test at the Eden with two full days to spare.

The other things that Shami did right were bowl quick and just short of a length, enough to keep the batsmen guessing all along. TA Sekar, the respected fast-bowling guru, can’t stop praising the Bengal bowler.

“More than anything else, I liked the way he swung the new ball. Yes, he got all his wickets with the old ball, but that doesn’t mean he did not get conventional swing,” Sekar explained.

The secret to Shami’s success, like MS Dhoni also pointed out, was his perfect seam position. Sekar elaborates on that point.

“Look at Zaheer Khan or even S Sreesanth. They succeeded because of their seam position. Shami is doing the same thing. Thankfully, he is not like Ishant Sharma who, more often than not, bowls with a scrambled seam. That’s why he neither moves the ball in the air nor off the wicket. No such problems for Shami. He bowls a very good Test match length and I am sure he will continue to do well.”

One is not trying to take anything away from Shami but truth be told, the West Indians are no Englishmen or South Africans. To say they made Shami look far more devastating than he actually was wouldn’t be off the mark. Their shot selection was poor, their footwork ineffective and they seemed to have no gameplan against our pacers. Did they devote all their homework time to the spinners?

“They misread most of the balls. They thought it was not going to come in all that much,” Sekar pointed out. “That’s the beauty of reverse swing. The batsman gets very little time to adjust. If you pitch it closer to the batsman [on off stump or thereabouts], it will do the trick. Look at Wasim [Akram] and Waqar [Younis]. Look at Zaheer. Why have all these bowlers been so effective? It’s because of the seam position. Shami does the same and then uses the aerodynamics of the ball. He is a great find and should try and do well in South Africa.”

But MS Dhoni gave Shami his vote of confidence. “You need a bit of pace to dominate. You can get a bit of reverse swing, and he’s got very good seam positioning which means he can reverse the ball away from the right-handers. So on wickets that have a bit more bounce, I think he will be even more effective with the ball going both ways.”

Bounce? Shami will get plenty of that in South Africa. Pace he already has.

Sekar went one step further. “Pair him with Zaheer and you will see the difference. They will do well in tandem,” he said. That, sure, is on Dhoni’s mind too. But Sekar also wants Shami to work on his angles, especially with the new ball.

Now, a little on that one problem every promising bowler in India tends to suffer from: over-coaching. Sanjay Manjrekar summed it up beautifully with this tweet: “Mohd Shami should just keep bowling and not take too much advice. Not sure there are too many in Ind(ia) who really know the art of fast bowling.”

Sekar is one of the few fast bowling technicians we have and he agreed that Shami must not be over-coached. “That’s the job of the team management, especially the bowling coach (Joe Dawes).” Yes, we don’t want Shami to go through what Irfan Pathan did.

Shami’s bowling figures in Kolkata were the fourth-best by an India fast bowler at home and the best since Javagal Srinath’s 13 for 132 against Pakistan at the Eden Gardens in 1999.

Before that, only Kapil Dev’s 10 for135 against West Indies in Ahmedabad in 1983 bettered it.