Mohammed Siraj's 4 for 31, David Warner's 69 and other highlights from Gujarat Lions (GL) vs Sunrisers Hyd

With the place in the playoffs up for grabs, defending champions Sunrisers Hyderabad (SRH) held nerves as they comfortably beat Suresh Raina’s Gujarat Lions (GL), in match 53 of the Indian Premier League (IPL) 2017 at the Green Park Stadium in Kanpur on Saturday. SRH registered an eight-wicket win, which helped them to qualify for the IPL 2017 playoffs, where they stand a chance to defend their title. They also became the second team to qualify for the playoffs, after former champions Mumbai Indians (MI). As for this match, it too had its moments as well, as we look at the highlights. FULL CRICKET SCORECARD: Gujarat Lions (GL) vs Sunrisers Hyderabad (SRH), IPL 2017, Match 53 at Kanpur

Dwayne Smith’s 54: GL had a brilliant start to their innings and were 111 in the 11th over. Dwayne Smith was off to a flying start as he went after the bowlers initially. He played a steady innings of 54 off 33 deliveries, including seven boundaries and two sixes, along with a strike rate of 163.

Ishan Kishan’s brilliant 61: Apart from Dwayne Smith, it was fellow opener Ishan Kishan, who too had his moment as he synchronised his innings well enough with his opening partner and made sure he too contributes to the splendid opening star. He went on to play a brilliant innings of 61 off 40 deliveries, including five boundaries and four sixes. His 111-run opening stand with Smith put Gujarat in strong position. FULL CRICKET UPDATES: Gujarat Lions (GL) vs Sunrisers Hyderabad (SRH), IPL 2017, Match 53 at Kanpur

Nelson strikes: As the openers contributed to the Gujarat innings individually, naturally it led to a fine opening stand between the two, as both the openers put up a strong 111-run stand for the opening wicket, with Smith contributing 54, while Kishan too contributed 54 in the stand. However, it was the score of Nelson when they lost their first wicket.

Bright comeback by SRH bowlers: SRH bowlers were strong enough to hold their nerves and stay patient, as it ultimately paid off, with the bowlers striking back in the latter half of the innings to put Gujarat on the back foot. Mohammed Siraj and Rashid Khan orchestrated a brilliant comeback, claiming 4 and 3 wickets each, while Gujarat were bundled for 154 within 19.2 overs.

Mohammed Siraj‘s 4 for 32: In an unexpected turn by the SRH bowlers, it was their young pacer Mohammed Siraj who bowled brilliantly and helped his team bounce back in style as he claimed four crucial wickets, including the big wicket of Kishan, allowing Gujarat to be bundled for 154, while he gave away just 32 runs. It was his yorkers, which mostly did the trick for SRH, and the youngster also went on to bag the Man of the Match Award.

Rashid Khan’s strikes again Apart from Siraj, it was the Afghan sensation Rashid Khan, who has been a regular performer in IPL 2017, as he claimed three crucial wickets, including the all-important wicket of Dwayne Smith, while Gujarat succumbed to 154.

Captain leads from front: As for SRH, they were shaky initially during their chase, but it was the skipper David Warner, who held his nerve, as he smashed a splendid unbeaten 65 to make sure that SRH don’t fade away and qualify for the IPL 2017 playoffs, where they stand a chance to defend the title. His 65 came off 51 deliveries, including eight boundaries, along with a strike rate of 127.

Vijay Shakar’s 63 not out: Not just Warner, but it was SRH’s middle-order batsman Vijay Shankar, who too played a great role in holding the middle-order. In absence of Yuvraj Singh and Kane Williamson, they needed someone to step up and Shankar did that well. He smashed 63 not out, along with a fine contribution from the skipper, which indeed sealed the fate for SRH in the tie. His innings came off 44, including nine boundaries, along with a strike rate of 143. He along with Warner were also involved in a sunny 133-run stand, as it was this pair that turned out to be a nightmare for Gujarat. This was Shankar’s first fifty in IPL. Sachin Tendulkar: Fans will get to see my romance with Anjali in 'Sachin - A Billion Dreams' 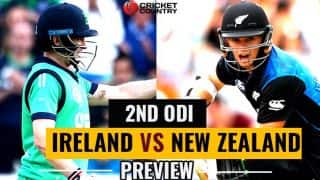