Those before Taylor to score twin centuries in a Test are the Flower brothers Grant and Andy; Taylor first achieved the feat in 2013.

Former Zimbabwe captain Brendan Taylor has become the first batsman from his country to achieve the distinction of scoring two hundreds in the same Test match.

Taylor followed his 110 in the first innings with unbeaten 106 as Zimbabwe were beaten by 218 runs by hosts Bangladesh on day five of the second Test at Mirpur to share the series 1-1.

Set a massive target of 443, Zimbabwe resumed batting on Thursday on 76/2 and got as far as 224 with Taylor the only batsman to cross 50. The next best was Brian Chari s 43 on the fourth evening, with skipper Hamilton Mazadza the only other batsman to get past 13. 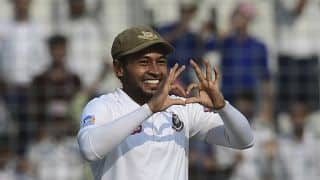