After Graeme Swann’s retirement, Monty Panesar can become the spin spearhead for England.

On August 6, 2013, when England spinner Monty Panesar was caught urinating on nightclub bouncers in Brighton, and was fined for being drunk, his career seemed to be on the line. A trip Down Under to play in the all-important Ashes tour seemed like a distant dream that won’t happen. However, in a twist of fate, with lead spinner Graeme Swann‘s untimely retirement after England was browbeaten in the first three Ashes Tests of the 2013-14 series, it has opened the flood gates for Panesar to be England’s go-to-man in the spin department.

Back in 2006, when England was about to tour Down Under for the Ashes series, there was an interesting aspect related to Panesar that came out in the media. Panesar and his teammate at Northamptonshire, Michael Hussey were said to be very close friends, while playing for the County side. Both of them became renowned for the sheer hard work they would put in for hours together in the nets. It seemed like Hussey wanted to bat day and night, seven days a week. Panesar wanted to do the same as a bowler. It got to a situation, where their Second XI coach Nick Cook had to come out and stop them from practicing forever.

This anecdote, related to Panesar, showcases that here is one cricketer who doesn’t shy away from putting in the hard yards. So, when he takes the field in the fourth Ashes Test against Australia at the Melbourne Cricket Ground (MCG) in place of Swann, no one can question Panesar’s work ethic. However, there are a few doomsday prophets who believe his career graph is on the wane.

First and foremost, let it be made clear that Panesar is no Swann. Swann had this uncanny ability to bowl quick through the air and still impart over 2,000 revolutions per minute. These are freakish numbers for any finger spinner. Yes, Panesar just like Swann has supreme control over his well-oiled art of left-arm spin bowling. He has the natural gift of being born with huge hands which in turn helps him to get that ‘dip’ or over-spin on the ball. Yet, he has his fair share of limitations.

Over the years, Panesar has been rightly criticised for his inability to bowl with those subtle changes in pace to keep the batsmen in tenterhooks. Even though, he has an arm-ball up his sleeve, it isn’t a deadly wicket-taking weapon for him. In an era, where umpires are giving more and more batsmen out leg-before the wicket on the front-foot, having a deadly arm-ball is like gold dust to a left-arm spinner.

Undoubtedly, Panesar still has a box of tricks to lead England’s spin attack for some time to come. Actually, there was a time between 2006 to 2009 when Panesar carried on the mantle of leading England’s spin department on his shoulders manfully. The mettlesome cricketer wowed cricket pundits when he made an experienced Pakistan batting line-up consisting of big names like Mohammad Yousuf, Inzamam-ul-Haq and Younis Khan look rather ordinary in 2006 in the Old Blighty.

If it was an eight-wicket haul at Old Trafford that gave Pakistan’s batsmen constant nightmares, then on a track that didn’t suit his style of bowling at Leeds, he took a bagful of wickets too. Who can forget him drawing Inzamam out of his crease by tossing it up above his eye-line and getting him stumped. While walking back to the pavilion, the lumbering gait of Inzamam and the bewildered expression of his face said it all.

Just when cricket pundits earmarked Panesar to be the front-line spinner for many years to come, Swann, from the world of wilderness, was selected by then coach Peter Moores. His rapid rise to the summit of success meant that Panesar soon became England’s second spinner. Panesar too lost his way a bit, particularly during the Test series in West Indies in 2009. Panesar was picked sporadically and he even out-performed Swann in a Test match at Mumbai against India last year. But those occasions were few and far between.

Monty Panesar still may be in for some tough competition from the young generation of English spinners coming through the ranks. Scott Borthwick of Durham isn’t just a handy leg-spinner but can bat at most batting positions in the top six of a batting order. He is also a very athletic, agile fielder who has bucket-like hands, while fielding in the slip cordon. It is a known fact that Panesar is a poor fielder and rabbit with the willow in hand. With England having a penchant to plump for all-rounders, Borthwick may just take Panesar’s place in the near future. But for the time being, he is perched on the top of the pile in England’s spin department, and has a gargantuan task of lifting the sagging morale of a demoralised England setup by bowling well in the fourth Test at the MCG. 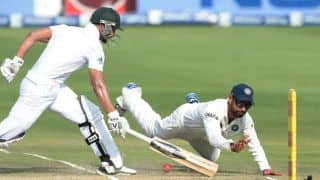 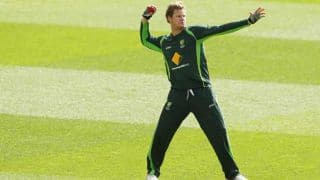