Mothers are, all said and done, a rather serious issue, and cricket has had its own share of them.

The second Sunday of May is traditionally observed as Mother’s Day throughout the world. Abhishek Mukherjee looks at the most famous mothers in the history of the sport.

Mothers are, all said and done, a rather serious issue, and cricket has had its own share of them. They have stayed up nights nursing their children back into fitness, they have made them gruel day in and day out, they have made them follow the strictest regimes; but all of them have managed to convert them into quality cricketers.

[Note: The article does not necessarily include mothers with several children playing international cricket, which means that Ameer Bee, Mrs Chappell, Mrs Waugh, Mrs Hadlee, Mrs Joyce, and Mrs Ngoche all miss out. Martha Grace, of course, barges through on her own merit.]

1. The Grandmother of Cricket

The mother of The Father of Cricket, Martha Grace was, to quote Arunabha Sengupta, “a tall, strong, imperious woman who arguably knew more about cricket than the most addicted gentleman following the game.” She maintained scrapbooks of the records of her sons — WG, EM, and Fred — and was never short on criticism when one of them made a lapse of any sort.

It was, thus, not a coincidence when a match between Gloucestershire and Leicestershire was abandoned when Mrs Grace passed away midway during the match. It is the only known occasion where a First-Class match had been abandoned for such a reason.

2. A third centurion in the family

A pair of brothers to have scored Test hundreds is not that difficult to find, but when their mother joins the list it really becomes an awesome combination. Irene Benaud turned Richie (and later, John) Benaud Test cricketers at a gap of 20 years (which meant she had to go through the entire ordeal twice).

As per Richie Benaud’s admission, it was she who made him love vegetables: “You can’t go out and play cricket until you have eaten all your vegetables.” Though Mrs Benaud is no more, she was 104 when she had passed away.

Meenal, sister of Madhav Mantri, played an instrumental role in her son’s growing up. Before honing his forward-defensive strokes and immaculate straight-drives in the gullies of Bombay, a very young Sunil Gavaskar used to practice batting against his mother’s — one can safely assume — not-too-dangerous bowling.

One full-blooded straight-drive, somewhat unfortunately, got more elevation than Sunil would have wanted to, and smashed his mother’s nose, causing her to bleed. Gavaskar later wrote in Sunny Days: “My most vivid recollection of my childhood cricket-playing days is the time I almost broke my mother’s nose.”

The incident did not deter Meenal from giving her son batting practice. She can easily claim the credits for a chunk of those 10,122 runs.

Not much to talk about here: it was just that Mrs Fairbrother was, to nick a word from the contemporary generation, a blind fan of the handsome and elegant Neil Harvey; it was not a coincidence that she named her son Neil Harvey Fairbrother. Neil Fairbrother went on to become one of the earliest finishers of the shorter format, but more coincidentally, he was a left-hander as well.

5. For whom the bell tolled

It is well-documented that Curtly Ambrose took 7 for 1 from 32 balls in that Test at WACA. A lesser known side of the story is the fact that a bell at Swetes Village just outside the Ambrose’s got rung 7 times during the phase. It did not help the neighbours that it was not exactly broad daylight in Antigua. Hillie Ambrose rang the bell every time her son got a wicket.

Mrs Ambrose and the bell are a part of Caribbean cricket folklore, but it took some time for her son to get to know of her antics. He only got to know of the ritual from newspapers; when he came back to Swetes, Mrs Ambrose proudly showed him the bell.

Jane Speight was, of course, Geoff Boycott’s mother — and if one takes the Yorkshireman’s words literally, she was better than most international cricketers (especially batsmen) of the 1990s and 2000s. What the greats of the era found difficult to encounter with the willow was easily dispatched using an object out of her toiletries bag: “Ma’ moom coulda’ hit that with a toothbroosh.”

And finally, no article on mothers in cricket can be complete without Virender Sehwag’s mother from the Reliance commercials: 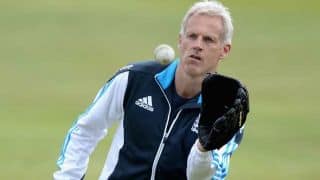