Here's a look at some of the best sixes from one of the greatest finishers in the game.

MS Dhoni is a six-hitting machine who has redefined power in cricket. The Indian skipper can hit them almost at will and that has made him one of the best finishers in limited-overs cricket. Those strong forearms can send the ball miles and stun the bowlers with power. Over years Dhoni had smacked those sixes at crucial junctures — some of them have gone on to become iconic moments in his career. Nishad Pai Vaidya picks 10 sixes by Dhoni that remain etched in memory for various reasons.

The almighty marked April 2, 2011 as Dhoni’s date with destiny. India had braved the odds and absorbed the pressure of being hosts by making it to the final of the ICC World Cup 2011. Chasing 275 in the big final, India lost Virender Sehwag and Sachin Tendulkar early. Gautam Gambhir and Virat Kohli constructed a sound partnership to help India recover, but when the latter was dismissed with the score on 114, the game was still in the balance.

Dhoni had struggled with the bat throughout the tournament, but had promoted himself ahead of the in-form Yuvraj Singh final. He then went on to play one of his greatest knocks and made the task look comfortable. With four needed off 11 deliveries, Dhoni sent that fateful Nuwan Kulasekara delivery into the stands at long-on as a billion people celebrated the victory. His innings of 91 off 79 balls will always have its place in history.

Chasing 270 to win, India were cruising with Gambhir in control of the situation, but started losing wickets to allow the Australians a sniff. Dhoni walked in at the fall of Gambhir at 178 for four in the 35th over and struggled to get the ball away. He kept knocking it around for singles. In fact, Suresh Raina was the one leading the charge at the other end.

However, Raina and Ravindra Jadeja fell at the death and that left India with 13 to get off the last over. Ravichandran Ashwin was on strike though and he missed the first ball. Off the next, he managed to get Dhoni back on strike. Until then, Dhoni had ambled to 33 off 55 balls without a boundary. With 12 needed off four, India needed his best. Clint McKay pitched it full and Dhoni gave it everything — summoning the collective power of all his hits to clear the long straight boundary at the Adelaide Oval. That ball sailed 112 metres. With six needed off three, Dhoni finished it off and make it look quite easy.

On a tough wicket at the Queen’s Park Oval, India and Sri Lanka battled for the trophy. India were chasing 202 to win and were cruising at one stage with the score on 139 for three in 31 overs. Rohit Sharma’s dismissal brought Dhoni at the crease and opened the floodgates for Sri Lanka.

The lower order crumbled with Dhoni holding one end and watching the procession. With one over to go, India needed 15 and had only one wicket in hand. Dhoni took strike with Eranga visibly under pressure. The first ball was a bit wide outside the off-stump and Dhoni missed a big heave.

The Indian captain held his nerves and simply walked away towards square leg-and before making the trek back to the crease. The next ball was a pitched up and closer to Dhoni. He went through with the bat swing and hit it miles in the air, clearing the straight boundaries. That hit shocked Eranga and he never recovered. With nine needed off four, Dhoni sealed it with a six and a four. As expected, his teammates celebrated harder than he did. For him, it was just another day in the office.

Though Dhoni had announced himself during Pakistan’s tour of India in 2005, he hadn’t yet faced Shoaib Akhtar’s thunderbolts. When India touched down in Pakistan in 2006, Dhoni had established himself as the exciting young batsman and many waited for him to clash against Rawalpindi Express.

The first Test did not present with that opportunity as Rahul Dravid and Virender Sehwag put up that epic partnership. But, in the second Test at Faisalabad, Dhoni walked in with India in a spot of bother. Up against Pakistan’s 588 in the first innings, India were 258 for four when Dhoni made his way out.

Dhoni braced to face Akhtar who welcomed him with a short ball. He then bowled another one short and wide — Dhoni chased it and edged it over the slips to get four. There were a few words exchanged after that, but Dhoni kept his cool and played out the over. An over later, Akhtar bowled another short one, quick and angling into body. Dhoni pulled it with disdain and sent it over the square-leg fence. Talk about fighting fire with fire!

Long before that powerful loft with the wafting blade was called the “helicopter shot”, it was just another trick in the Dhoni mystic. One of its first appearances came during an ODI at Goa. With India going for the charge in the slog overs, James Anderson pitched it in Dhoni’s half, who lofted it towards mid-wicket and there was that familiar waft in the follow through. Ian Botham, the great English all-rounder, was amazed and said on air, “Just watch the back-lift and the follow-through at the moment of impact! Not quite sure what he did there, but it was very, very effective — almost swung himself off his feet.”

CSK had made a backdoor entry into the playoffs of the Indian Premier League (IPL) 2012. In the Elimination final against MI, CSK were in trouble early but had made steady ground when Dhoni walked in at 95 for three in the 14th over. Needing that impetus, Dhoni unleashed his best and pummelled the bowlers into submission. The most striking moment came in the penultimate over when MI summoned the reliable Lasith Malinga to bowl his toe-crushers. With that slingy action, Malinga missed the yorker length ever so slightly. Dhoni got his bat down and “helicoptered” it over mid-wicket. In doing so, he was almost on his back-foot as the ball sailed into the stands. The world’s most dangerous limited-overs bowler was humbled with that one morale-crushing strike.

Rohit Sharma dazzled with his double ton in the match. In the slog overs, when Rohit and Dhoni made merry smashing the bowling to all parts, James Faulkner bowled one full. Dhoni unleashed the helicopter and sent it on the roof of the M Chinnaswamy Stadium, Bangalore. The ball soared high and had traversed a distance of 110 metres. The sheer power of this stroke made it special. If one looks at the shot in slow-motion, one can see Dhoni’s whole body coil to bring that power into the shot. The power flows from his thighs to the hips and then into the arms.

On a small ground in Christchurch, the Indian batsmen used all their talent to milk runs at will. Dhoni too joined the party and embarrassed the boundaries with his power. Grant Elliot made the error of over-pitching. Dhoni smashed it over long on and into the stands. What made his shot remarkable was his head position after impact. Dhoni kept looking at the wicket and was dismissive in his body language after it. He only looked up after the ball had gone into orbit.

A last over finish! Call MSD! CSK needed to beat KXIP in their last league game of IPL 2010 to qualify for the semifinals. Needing 16 to win off the last over, Dhoni picked four off the first ball from Irfan Pathan and then took two more.

CSK needed another big hit with 10 required off four balls. Dhoni smashed one from outside the off-stump and sent it over long-on to make small work of the target. The ball sailed 108 metres. The next ball disappeared into the stands and Dhoni exulted in anger — an uncharacteristic reaction for someone so cool.

Dhoni usually plays the helicopter with the closed face of the bat and smashes the ball over long-on or mid-wicket. This may have been one of the few occasions where he opened the face of the bat with the helicopter in play. Sachin Tendulkar and Dhoni were attacking the West Indians in the slog overs during the fourth ODI at Vadodara in 2007. Rayad Emrit, the young West Indies all-rounder, got a taste of Dhoni’s six-hitting mastery. Dhoni opened the face of the bat and smashed it over long-off with that trademark follow-through in play. 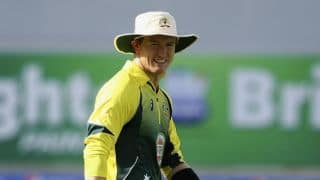 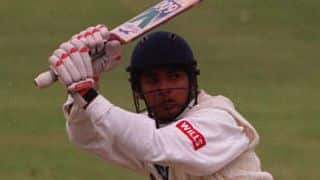