Indian cricket is on the verge of starting a new chapter: Virat Kohli perhaps feature in the headline and be marked in bold and italics on every page, and MS Dhoni will only have a mention in it.

December 30, 2016. It has been a week. My eyes got moist as Facebook memories, that innovation of Mark Zuckerberg created to make the strongest shed their tears against their will. It was an old post of mine, one that dated back exactly two years. MS Dhoni had retired midway through a series on Australian soil on the same day in 2014, taking the entire cricket fraternity by surprise. Having conceded an unassailable lead in the series, Dhoni decided to waste no time and restrict himself as a limited-overs player. There was a sense of pride thinking about his credentials in whites but one sensed the end to be near.

At that point Dhoni was in his eighth year as captain. His grey beard had made it obvious that the job had taken a toll on his body. He knew it was time to pass the baton to someone more deserving and prolong his career in shorter formats. People had started to contemplate about his retirement. Avid fans lived on the edge, dreading the inevitable: had Dhoni already not announced his retirement out of the blue once? On the other hand, critics waited for his ouster with every series defeat.

Dhoni started 2017 on the same note as he had ended 2014. He stepped down as captain from the shorter formats with a mere ten days before the bilateral series versus England. He decided to step down from the most strenuous job in the country and make way for a new leader. He is available as a player but this decision certainly brings curtains to an era. Between September 13, 2007 and January 4, 2017, Dhoni led in every limited-overs game he featured in and took India to prodigious success.

Dhoni holds the record for most matches as captain with as many as 331 matches across formats. He is also the only player to lead in over 50 matches in all formats and boosts of a cabinet filled with all ICC trophies: World T20, World Cup and Champions Trophy along with 50-over and 20-over Asia Cups.

Nonetheless, Dhoni has not only led India to glorious triumphs but has given plenty more to a nation obsessed with numbers.

Dhoni Truly a leader of the pack

India were going through turmoil in 2007 after a disastrous World Cup campaign in West Indies. Rahul Dravid, then captain, slowly restricted himself to Test cricket. He stood down from captaincy after the England tour. The national selectors elected a young, aggressive guy with no leadership experience. Dhoni was made the captain in limited-overs cricket (Anil Kumble was to lead India in Tests), mostly out of choice. India cricket embarked upon a new dawn the nation s most cherished game.

Dhoni learned the tricks of captaincy fairly quickly. He was well supported by Dravid, Sachin Tendulkar, VVS Laxman and Anil Kumble, and his immensely successful predecessor Sourav Ganguly. He made rapid strides courtesy his shrewd, street-smart attitude and unusual thinking. Just when India started ticking all boxes in coloured apparel, Kumble decided up his boots to give Dhoni charge of all formats. Kumble, Dhoni s current coach and former colleague, had noticed the latter s sharp rise as leader and was satisfied to leave the team in his hands.

The rest is history. There is no point sweating on win-loss ratios. Everything is there in public domain. This is the moment to look back in time.

Remember the pep talk he gave to Yuvraj Singh while batting on the night of the final of World Cup 2011?

Remember how he had kept reminding Gautam Gambhir to not go for glory shots in the same match?

This was the same man who had once made Pakistan President, Pervez Musharraf to fall for his blistering strokeplay (and hairdo) during a memorable chase against Pakistan at Lahore.

Dhoni s approach had won him fans. However, as responsibility crept in, Dhoni had to shed his shots, take fewer risks; he had to leave risk-taking to others; he had to become the fulcrum of his team.

India had almost always been strong in the limited-overs format. Ganguly s side had everything. If there was one chink in that side then it was the tendency of succumbing to pressure. The script remained the same till Dhoni came to the fore. His ability to remain calm and composed rubbed on his teammates. The way he manoeuvred his troops and switched on and off when needed made him lift every title in the game. He knew the team was more significant. He withdrew when the rest posed for photographs.

Dhoni believes in living the moment. No one pulls off as nonchalantly as him. He had dared to promote himself that night, on April 2, 2011. But even after he pulled off a spectacular victory, he was aware that the moment belonged to the Little Master . He even made sure to give resounding gestures to Ganguly and Kumble when they bid farewell. He changed the dynamics of the game, took charge out of nowhere, and oversaw the rise of prot g es, like Virat Kohli, Rohit Sharma and Ravichandran Ashwin to step down only after finding an able leader in the pipeline.

The likes of Dravid and Kumble had left their footprints. Dravid had continued to serve as a player. Kumble mentored the side when Dhoni was not yet ready for Test captaincy, saw India through a brief yet tough phase, and departed only when his successor looked eager to take charge. Dhoni did the same. He played, led on his own terms and retired from Tests without fuss.

He carried on in limited-overs cricket. His leadership has not changed a lot, but the reputation as a grand finisher was on the wane. By promoting himself to No. 4, Dhoni had made it clear that he wanted to contribute more as a batsman in the twilight of his career. He also interacted a lot more with Kohli in his last series. He has indicated that it is not a big deal to carry on under a junior. After all, he had led senior stalwarts in his early stint as captain. The results had been fruitful. He was merely following the same process . He was not leaving the team in dire states. He has pushed them to the next stage with him standing beside them.

There was never a perfect time!

2016 had witnessed India s rise to the pinnacle in ICC Test rankings. Kohli s young side stretched their unbeaten streak to 17 Tests. They have won everything that came their way. Their comprehensive and dominating display has won accolades from all corners. The same team fared decently in limited-overs cricket under Dhoni as well. With time, Dhoni probably realised that the side was more Kohli s than his. He also realised that the mantle should pass over to the man.

All things considered though, Dhoni has taken the right decision. Over the last year, this had become Kohli’s team.

With only 3 ODIs remaining for India before Champions Trophy, Dhoni has given minimal time to Kohli. Nonetheless, the core of the team remains the same, and he will be helped by Dhoni s continuous presence. Perhaps Dhoni was looking at a larger picture. Perhaps his eyes are set on World Cup 2019, not its miniature version.

Let us take a moment now and reflect: was there ever a perfect time for Dhoni to step down? We are used to his sarcastic comments in press conferences, using words like process and yes, of course time and again and not thriving for attention. There will be a feeling of nostalgia when Kohli, touted to replace Dhoni, will walk out on January 15 for the toss in the series opener versus England.

I have to refer to the clich that there will never be a skipper like Dhoni . I suppose it will only be appropriate to quote from his biopic: Humara mann kehta hai Mahiya itne se mein khush nahi hoga (I do not think Mahi will be satisfied so easily). He will shimmy down the track and unleash his onslaught on bowlers and leave the game as haphazardly as his retirement decisions have been till date.

Indian cricket is on the verge of starting a new chapter: Kohli perhaps feature in the headline and be marked in bold and italics on every page, and Dhoni will only have a mention in it, but these are certainly interesting times.

Hailing from the same state, I will like to pour my heart out (as well as bask in reflected glory) for his contribution towards a less prominent region. Jharkhand is poised to become a formidable domestic side. They have crashed out in the semi-final clash against Gujarat in the ongoing edition of the Ranji Trophy, but have big steps as a unit. Their players do not surface from cricket academies in the razzmatazz of big cities but from coaching centres in district towns where grounds are without compound walls, have a place for aspiring sportspersons. He even gave it back to his state side by mentoring Jharkhand in Ranji Trophy and giving them a bigger pedestal. He has seen and done it all.

Let us, for once, savour the moment the way he is, sitting in his secret abode, and cherish the legacy left by him.

This is probably the most inspiring and impactful climax in Hindi cinema. The last part shows a glimpse of Dhoni where he is seen acknowledging the crowd in his usual calm demeanour. He is expressionless barring a mere wave. The body language says the rest: A chapter of my life may have ended. But I am merely turning a new leaf. This is perhaps my last phase, but there is still some cricket left. I will end it all the way I began: a young, belligerent wicketkeeper-batsman. 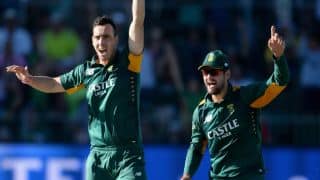