MS Dhoni has not batted much at Ranchi in international cricket, and is yet to score a T20I half-century.

After losing the first Twenty20 International (T20I) by 5 wickets in an embarrassing encounter, the Indian cricket team will take on Sri Lanka in the second of their three-match series, at their captain MS Dhoni’s hometown of Ranchi. India have played three One-Day Internationals (ODIs) there, but this will be their first-ever T20I at the venue. Out of the three ODIs India has played here Dhoni has played only two. India’s record at Ranchi is good: of the three ODIs, they have won two while the third has produced no result. Dhoni’s individual performance has been nothing outstanding, though his teammates have done quite well at his hometown. Full Cricket Scorecard: India vs Sri Lanka 2015-16, 2nd T20I at Ranchi

This will be the third time Dhoni plays an international match at his home ground. The first ODI played at Ranchi was in 2013, and saw India cantering to a seven-wicket win set up by their bowlers. Ravindra Jadeja took 3 for 19 while Ishant Sharma and Ravichandran Ashwin took two wickets each as India bowled out England for a mere 155. Virat Kohli’s unbeaten 77 led India home with consummate ease while Dhoni himself scored 10 not out off 12 balls. ALSO READ: Hardik Pandya needs to grab the opportunity to stop Pawan Negi from replacing him

The next time India played at Ranchi was later that year, this time against Australia. George Bailey and Glenn Maxwell scored 90s as Australia posted 295 for 8, but the match was washed out with India 27 for no loss. Dhoni did not get to bat at all as the match yielded no result.

The third ODI played at Ranchi was in 2014 against Sri Lanka. It was the fifth and final match of a series which India had already won 4-0. Angelo Mathews’ maiden ODI century, 139 not out, led Sri Lanka to 286 for 8. India’s captain for the series, Kohli, scored 139 not out as well to lead his team to a tense 3-wicket win and India ended up whitewashing Sri Lanka 5-0. Incidentally that was India’s last bilateral ODI series win till date. ALSO READ – India vs Sri Lanka 2015-16, 2nd T20I at Ranchi: Five things the hosts must do to win

Dhoni could take confidence from one particular innings of trademark brutality that he played at this very venue; a knock that saw him obliterate a Sri Lankan bowler in its course. It was the 10th match of CLT20 2013, between Chennai Super Kings (CSK) and Sunrisers Hyderabad (SRH). Dale Steyn had bowled a terrific spell to take 2 for 23 up front. Dhoni walked in with CSK 115 for 3 in the 15th over. At the start of the 18th over CSK were 141 for 3. In came Thisara Perera, with Dhoni on strike. The first ball was a wide, as was the third. The fourth was a couple of runs. The remaining five balls went to all ends of Ranchi as Dhoni hammered five sixes in the over to take 34 off it. Dhoni ended the innings unbeaten on 63 off 19 balls as CSK amassed 202 for 4 and won by just 12 runs.

Dhoni has not batted much at Ranchi in international cricket, and is yet to score a T20I half-century. In 56 T20Is, Dhoni has never scored more than 48 not out; a far cry from his career T20 record where he has amassed 17 fifties. If Dhoni does score big, he will be killing a number of birds with one stone; apart from Ranchi being his home ground it will also be India’s first T20I at the venue and Dhoni could score his first-ever T20I fifty. It will be a fairytale script; the type Dhoni has been writing for himself for years. 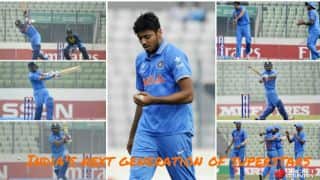