MS Dhoni has been praised, adored, criticised, lauded, hated, dissected, and written off by fans and critics.

MS Dhoni took his first strides in international cricket on December 23, 2004 at Chittagong. For a decade after the match he remained one of the most talked-about characters in Indian cricket. Abhishek Mukherjee looks back at a forgettable debut.

It is still too early to comment on MS Dhoni s somewhat curious international career. Numbers suggest he is one of the greatest batsmen in ODIs. He has had decent performances in the other two formats as well, which is somewhat unusual: seldom have people ruled or failed in only the middle format.

But then, Dhoni has never been conventional. His has been a career of inexplicable highs and lows. He has been praised, adored, criticised, lauded, hated, dissected, and written off by fans and critics alike but never ignored. Indian fans have almost always given in to on-field aggression.

It has certainly not been an ideal career for Dhoni (or MSD, or Mahi, or whatever is fashionable these days). Just like Sourav Ganguly before him, he has greyed prematurely. He has been at the receiving end of many a controversy and overseas defeats that often overshadow his three ICC titles World Cup, World T20, and Champions Trophy.

The youngster with that long mane is a thing of the past. He hails from unheralded Ranchi; he was a ticket-checker in Railways at Kharagpur who played cricket, and was spotted by Raju Mukherjee and Prakash Poddar; the pair found him so talented that they chose him ahead of Deep Dasgupta, a man from their city. He found his way to India A. He represented India in Hong Kong Super Sixes. He saw the Bihar Ranji Trophy team being renamed to Jharkhand. He played for Indian Board President s XI against the touring South Africans.

In between all this, he went to Bangladesh as a part of what can probably be called an experimental squad and made his international debut.

The match did not start on a high for India, who had rested Virender Sehwag and Zaheer Khan. After Habibul Bashar put India in, Ganguly was bowled by Tapash Baisya in the second ball of the match. There was brief resistance from Sachin Tendulkar and Yuvraj Singh, but India were left struggling at 45 for 3 in the 13th over.

Rahul Dravid (53) and Mohammad Kaif (80) then dug in, adding 128 for the fourth stand. Dhoni arrived after Dravid and Sridharan Sriram was dismissed in quick succession. Dhoni was up against the wily Mohammad Rafique. Eager to get off the mark, he pushed one to Baisya at square-leg and ran. There was no run in it, and Kaif rightfully turned him down. Dhoni turned back in desperation, only to find himself short of the crease.

It was the first ball he faced in international cricket. It seems impossible to think that Dhoni would lose his cool and try for a run that was not there. It is impossible to think he would be desperate for his first run. It was as un-Dhoni-ish as it could get. But then, he was 23 then; he was not the captain of India; the pressures of international cricket had not gotten to him.

Kaif played his part, and some lusty blows from Ajit Agarkar and Irfan Pathan (and a first-ball boundary by Joginder Sharma, the other debutant, in the last over) took India to 245 for 8. Bangladesh were reduced to 44 for 3, and later 160 for 7. The dismissal of Bashar (65) perhaps made Khaled Mashud go hammer-and-tongs. He finished with 50 not out from 39 balls, but Bangladesh fell 11 runs short.

– India hit back in the third match; Dhoni hit a six and took a single off the two balls he faced, and finished with 3 catches and 2 stumpings. 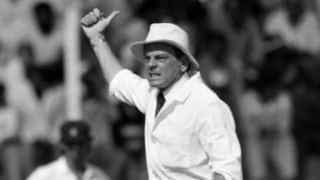 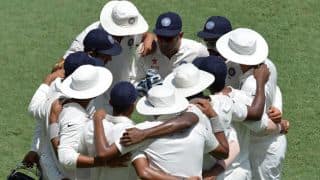 India vs Australia 2014-15, 3rd Test at Melbourne: India desperate for comeback against Australia to save Test series