MS Dhoni s wish to bat at No. 4 could not have come at a better time when India are still figuring out what their core group in limited-overs cricket is.

He says he is losing his ability to rotate the strike. He wants to bat higher, at the coveted No. 4 slot, but he does not have requisite experience. Out of his 281 ODIs for India, he has batted at No. 4 only 24 times. He wants to make a difference to this star-studded Indian batting line-up in limited-overs cricket, not just with his captaincy, but with the bat as well. But as MS Dhoni s career inches closer to the impending end, the venerable cricketer has thrown himself into a fresh pool of different issues altogether by finally taking up something the cricketing world wanted him to from a very long time batting at No. 4. FULL CRICKET SCORECARD: India vs New Zealand, 4th ODI at Ranchi

There is a reason why Dhoni is revered as one of the finest cricketers and captains witnessed in the recent times. He may have bowed out of Test cricket unceremoniously without asking for any farewell or making any hoo-ha about it, Dhoni is surely not making a quiet exit from the limited-overs format. Fitness is not an issue, and so is form. So far, batting lower in the order would provide him an obvious cover for not getting the runs, but if Dhoni is going to stick to the No. 4 slot for India, especially in ODI cricket, there is an extremely tough challenge lined up ahead.

The last big victory which India registered under Dhoni was the ICC Champions Trophy 2013, and since then, two World T20s and a 50-over World Cup have been held with his team returning bare-handed. Next year, when the Indian side will travel to England to play in the upcoming edition of the ICC trophy, they will not only be looked upon as a unit defending their title, but as the one which will be back two years later threatening to win their third World Cup title.

But will Dhoni last till then? If there is one question that has constantly bothered the Indian management and the selectors, is this. But for Dhoni, life post Test retirement has not been any different than what it was before it. He has gone about his job with similar zeal, but unfortunately, for him as a player as well as a captain, the team has not been able to achieve feats as it used to.

The year 2015 was surprisingly a forgettable one for India in ODIs, despite them bowing out of the World Cup in the semi-final. The team lost away series to Bangladesh and South Africa hammered them at home. The Test team discovered lost mojo, avenged the ODI series to South Africa in the Tests, but not before registering an away Test series win in Sri Lanka. The demand of Kohli replacing Dhoni surged as the year progressed, but what was worst was Dhoni not looking his usual self.

Winning the Asia Cup T20 2016 provided a shot in the arm to Dhoni s dwindling fortunes, and the semi-final exit in World T20 proved after all he was mere mortal; India were not going to win everything under him. But by the time the New Zealand series arrived, following the mandatory outing in Zimbabwe, a leaner, meaner and fitter Dhoni has finally emerged, having freed himself from the shackles that were holding him back.

Dhoni has been India s captain for close to 10 years, but for perhaps the first time ever, he has put himself ahead of the team. Dhoni s wish to bat at No. 4 could not have come at a better time when India are still figuring out what their core group in limited-overs cricket is. With Dhoni having admitted that his prowess is waning as a finisher, perhaps it was time too. Batting at No. 4, Dhoni will have all the freedom to pace his innings the way he wants to. He will want to build the innings around him and at the same time, play big shots as well. But it is something only time will tell. Given the fact that the team will have to start looking for finishers apart from Dhoni, the time is apt for the team and its captain to do all the experimentation they want to do.

With questions lingering over his future and his role and his contribution to the Indian side, Dhoni returns to his home ground, at the Jharkhand State Cricket Association (JSCA) Stadium in Ranchi for the fourth ODI against New Zealand. This could perhaps be the last time that Dhoni is playing at his home ground. India s extended home season does not feature any other international match than this. Dhoni has expressed his wish to play the upcoming Vijay Hazare Trophy 2016-17 for Jharkhand, but since the venues of the one-day tournament are not announced yet, the game on Wednesday against New Zealand could be his last at home venue.

If this is going to be Dhoni s last international game at his home ground, the stage is set perfectly for the venerable cricketer to end it on a high. He will be coming in to bat at No. 4 irrespective of the scenario in the last ODI India were chasing a stiff target and they needed their ace batsman to bat up. And the expectations will not only be high from the crowd at Ranchi but also from everywhere else in the world. The last time Dhoni slammed a century in ODI cricket was in October 2013, and it is time for the veteran batsman to put an end to the barren run in front of the home crowd.

Meanwhile, even though the Indian cricket team is missing some of their premier bowlers, under Dhoni the current bowlers such as Hardik Pandya (playing in his first series), Umesh Yadav and even Kedar Jadhav have rediscovered new facets in their game. A lot of credit should be given to Dhoni for pushing budding talents in this series. 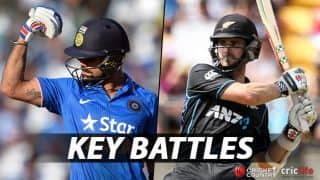