Even on a wicket that offered copious juice for the battery of South African pace bowlers, Mahendra Singh Dhoni showed yet again why he is in a class of his own.

Even on a wicket that offered copious juice for the battery of South African pace bowlers, Mahendra Singh Dhoni showed yet again why he is in a class of his own. He was the only one who gave the Indian effort a semblance of respectability. Arunabha Sengupta reflects on the uniqueness of the Indian captain.

The figure 359 associated with Johannesburg has an apocalyptic ring to it — especially for Indians.  It was the score which 10 years earlier brutally dashed the Indian dreams in the World Cup final. On Thursday, there was a minor modification. This time 359 was the target.

The pitch was spicy, the pace scorching. South Africa took the field with unmistakable intent — six pace bowlers on a track where the ball reared up and zipped through. Think of India going into a home match on a pitch turning square with six spinners. Well, we are never quite as critical when others cruise blatantly on their home advantage.

However, Mahendra Singh Dhoni did not complain. He just went out there and fought. And he was the only one to do so.

Rohit Sharma needed 16 balls from Dale Steyn to finally feel the leather on his willow, 17 to get off the mark with a fortuitous edge. His innings was a nightmare — two edges which went to the boundary, plenty which did not go anywhere, and finally a hesitant run down the wicket that caught him short of ground. He now averages 11.16 in South Africa and has lot to prove in the weeks ahead.

Shikhar Dhawan tried to replicate his sub-continent methods on the Protean wickets and left as soon as the ball climbed a bit too much for comfort.

Virat Kohli did show glimpses of his class and style, with some superb drives and one regal pull stroke. However, he fell to a good ball at 31.

And Yuvraj Singh was predictably greeted by a snorter and played all around the next one.

The Indian line-up, which in recent times has chased huge total as if indulging in leisurely walks in the park, was 65 for four when captain Dhoni entered. Ryan McLaren and Morne Morkel were in the middle of spells that were hammering the last nails on the Indian coffin.

Now, Dhoni stepped down the track to loft the former over the off-side for a near six. The fast bowler erred in line now and was clipped to fine leg for four. And then he came out of the crease to heave Morkel past mid-wicket for four.

This was the man who according some ignoramuses does not possess the technique to play quality bowling in demanding conditions. Now he was showing the way to succeed against raw pace in South Africa. On these wickets, the bowlers simply cannot be allowed to dictate terms. With a flurry of audacious strokes, Dhoni forced the bowlers to alter their line and length. The results were almost immediate.

But, his cause was not helped at the other end. Suresh Raina went for a suicidal run, and walked back for an unconvincing 14.

With Ravindra Jadeja showing stomach for a fight, Dhoni continued to battle on, bringing out an extravagant stroke from time to time. A quick 50 was put on in just over seven overs.

But then Jadeja was bowled through the gate by Jacques Kallis. Ashwin played some superb strokes before falling to a sketchy decision.

At 184 for seven and the tail in, all that was left for Dhoni to do was to lend some amount of respectability to the total.

He pulled Morkel over square-leg for four. As another wicket fell, he clubbed McLaren for six over long on to bring up his 50 and then took India across the 200 mark that stands between rout and respectability.

There was a blow to the thumb but he carried on, even giving some stick to the deadly Steyn. And finally he chopped the ball onto the stumps for a lone hand of 65. The Indian innings ended four balls later.

Little remains to write about Dhoni’s greatness as a batsman in One-Day Internationals cricket. His deeds have already been documented in record books in much too eloquent terms to be neglected by history. There can be few doubts that he ranks at the very top of the all-time list of the best to have played the shorter version.

Thursday’s innings was yet another confirmation that even in this team of young guns, an untested mix of talent and inexperience, Dhoni is at a different level as the senior statesman.

He is the only one in the young team who has scaled enough peaks for a considerably protracted duration to merit the sobriquet of great.

It remains to be seen if the specialist batsmen can take a leaf out of this splendid book of the man who also wears the bigger gloves and perches on the hottest seat in the cricketing world. 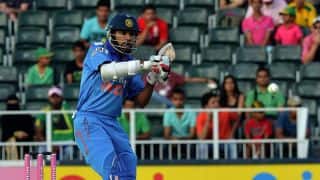 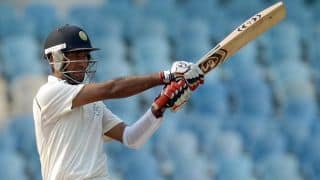