He is as criticised as much as he is hailed. He is as detested as much as he is respected. One day, he is a villain; the next day he is hailed a hero. MS Dhoni is the darling of Indian media. We, journalists, thrive on his highs and lows. We call him the Man with a Midas touch. We call him Captain Cool. We love to coin his extraordinary personality. He forces us to brainstorm catchy headlines. He makes us write long pieces. He is a cricket statisticians’ delight. Whatever he says turns out to be the quote of the day. In short, we cannot get enough of him. Read: Virat Kohli may be ready but there is still time for him to replace MS Dhoni

After India lost to West Indies in the semi-final of ICC World T20 2016, Dhoni mocked an Australian reporter in a press conference. By the looks of it, it seemed he had already rehearsed it in his mind. Not to blame him or the reporter, but the question of him retiring from international cricket was on the cards. It should not have come as a surprise: even Sachin Tendulkar was bothered with the same. Therefore, Dhoni is no exception.

Dhoni had caught everyone off-guard that day. “Come here. Let’s have some fun,” He said with a wry smile on his face, like it was a half-volley that needed his ‘helicopter’ treatment. He made the reporter sit beside him as the fellow reporters burst into laughter.

Given Dhoni’s demeanour, the reporter could well have been his friend till a swaggering Dhoni put his hand on the poor man’s shoulders and said, that smile never leaving him, “I was hoping it was an Indian media guy. You fired the wrong ammunition at the wrong time.”

No doubt that other reporters would have been relieved they were not in the firing line, especially the Indian media.

Every time Dhoni queried him, he nervously nodded yes or no. He was answering in one word, trying to get out of the maze he was trapped in. To share the press conference table with one of the greatest captains isn’t something you see everyday. It was indeed unprecedented. Who wouldn’t be nervous? Read: 5 crucial spells by Indian bowlers from 2011

However, kudos to the reporter as well. He asked a question every Indian journalist didn’t dare to.

While few made memes supporting Dhoni, others highly criticised him. While some took it as a joke and moved on, some termed it insulting.

Dhoni has shouldered many a responsibility without complaining. He has played matches with injuries, refusing to show signs of it on the field. Unquestionably, he has served the nation with distinction.

However, if Dhoni criticises media, let’s not fuss about it. He did what we do to him. He made us taste the dose of our own medicines. It’s okay. We all have a bad day at work; so does Dhoni. “I have three dogs at home. Even after losing a series or winning a series, they treat me the same way,” he said once.

On the other hand, a journalist’s job is to be unbiased (something, sadly, Harsha Bhogle was accused of), and provide facts and figures. Meanwhile, some news are misleading. And Dhoni has been at both ends. But you can’t take away the fact that his fans prefer reading such stuff. As a matter of fact, even we, journalists, have to make ends meet as well. It’s our job! Read: An open letter to Harsha Bhogle

If you still consider cricket as a gentleman’s game, what Dhoni did to the reporter in front of a live camera was uncalled for. He simply might have dodged it with his quick wit, like he does in most of the press conferences.

“You have every right to ask me that. It’s your prerogative. But I have the right to not answer,” Dhoni said in one of the many conferences.

Not that he’s a scapegoat, but he has an aura like no other. You can’t ignore him. Good or bad, he has to be in the news. He gives us ideas to write. He makes business for us. This love-hate relationship with media will go on and on.

At the end of the day, we, journalists, are his fans too. We pray for him like we did for Tendulkar. 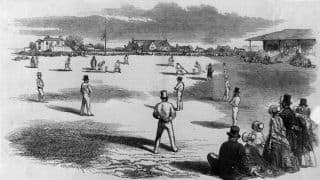 When Francis Noyes batted four times in a First-Class match