England needed 28 runs off the last three overs, with six wickets in hand, to overtake India's 129 in a rain-curtailed 20 overs and win their first ICC Champions Trophy. There was spin in the Edgbaston wicket, and England were almost out of it at 46 for four at one time, but a few good blows from Eoin Morgan and Ravi Bopara had brought the game within their grasp. Two powerplay overs to go should have made it a cinch for them. England needed 28 runs off the last three overs, with six wickets in hand, to overtake India’s 129 in a rain-curtailed 20 overs and win their first ICC Champions Trophy. There was spin in the Edgbaston wicket, and England were almost out of it at 46 for four at one time, but a few good blows from Eoin Morgan and Ravi Bopara had brought the game within their grasp. Two powerplay overs to go should have made it a cinch for them.

All the Indian bowlers had kept it tight until then, except Ishant Sharma who had gone at nine an over in his first three overs. Mahendra Singh Dhoni had reserved an over each from Ravichandran Ashwin and Ravindra Jadeja to bowl the last two powerplay overs. He had to choose between one of the seamers and part-time spinner Suresh Raina to bowl the 18th over before the powerplay.

Raina was the one who had given Dhoni so many options, having chipped in with three overs for 19 runs. Of the seamers, Bhuvneshwar Kumar too had given 19 runs off his three overs with the new ball, and Umesh Yadav had conceded only 10 in two overs and picked the wicket of the England captain Alastair Cook to boot. But Dhoni ignored them all and picked Ishant to bowl the 18th over, regardless of the fact that he had been the only profligate bowler until then. 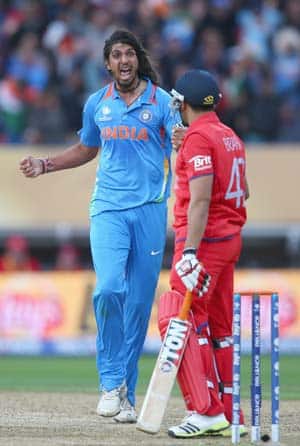 This is where Dhoni is strong-minded as a captain. To him it did not matter that Ishant had been more expensive than Bhuvneshwar and Umesh. What mattered was the current situation, and with one over to go before the powerplay, India needed a wicket. To Dhoni, Ishant was the more likely candidate to break the Bopara-Morgan partnership than Bhuvneshwar or Umesh. The tall bowler with the flowing locks had been fast and loose right through the tournament, leaking runs but also taking wickets.

To me, Raina, given the turn in the wicket and the way he had bowled thus far, would have been the man for the occasion. But Dhoni had seen how Bopara had slog-swept Jadeja against the spin for a six, and did not want to risk a part-time spinner in that vital over. He would rather gamble with Ishant.

Had he picked any other bowler for the 18th over, Dhoni would have faced no criticism. Had the Ishant move not come off, he would have got brickbats. All that was immaterial to Dhoni, and that’s why he is “Captain Cool“.

Ishant began with two short balls to Morgan, who missed one and hit the other for a six. The next two balls were wides as Ishant tried switching to bowling full outside off-stump, the fail-safe formula for containing Morgan. Then, almost in desperation, Ishant bowled a slower one which Morgan mishit for a catch. The very next ball, he had Bopara hooking a short ball straight into the hands of square-leg. Game, set and match for India.

It worked for Dhoni. But did he really need the Ishant gambit? Couldn’t he have made do with Umesh, who was less likely than Ishant to completely lose it? Well, Dhoni must have thought Jadeja and Ashwin wouldn’t really have been able to hold back Morgan and Bopara in the powerplay. The English batsmen, on the other hand, thought they had to go hard at Ishant because Jaddu and Ash would be harder to hit, and got out in trying for too much.

Who would have imagined the championship would be decided in one Ishant Sharma over!

(Former Sunday Editor and cricket columnist of DNA, Sumit Chakraberty has been a journalist for over 30 years, with earlier stints at Indian Express, The Times of India, BiTV and UTV. He is now an independent writer and blogs on cricket at http://cricketkeeper.blogspot.in . You can also follow him on Facebook at http://www.facebook.com/sumit.chakraberty and on Twitter at http://twitter.com/cricket_keeper)