MS Dhoni limped off the field with a hamstring injury during India’s first game of the tri-series in the Caribbean. The Indian captain’s workload is unparalleled — it is not only heavy but also intense given the responsibilities he juggles. Nishad Pai Vaidya examines Dhoni’s workload since his debut in December 2004 and says why he needs to be managed well in the lead up to the next World Cup. 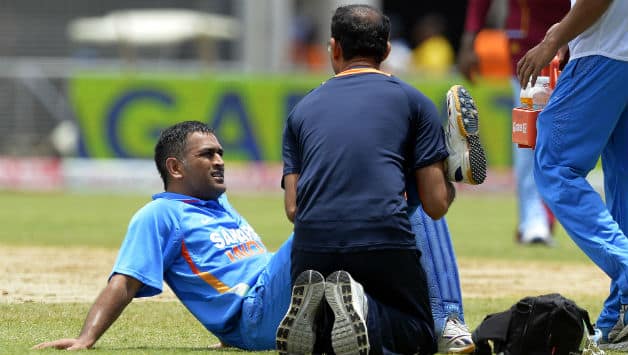 MS Dhoni limped off the field with a hamstring injury during India’s first game of the tri-series in the Caribbean. The Indian captain’s workload is unparalleled — it is not only heavy but also intense given the responsibilities he juggles. Nishad Pai Vaidya examines Dhoni’s workload since his debut in December 2004 and says why he needs to be managed well in the lead up to the next World Cup.

For the first time, the world witnessed the tough fighter Mahendra Singh Dhoni limp out of the cricket field. A weary hamstring gave way as he clung on to every bit to extend India’s challenge against the West Indies at Jamaica. The new rules forbid a runner, so he stuttered and dragged himself only for the team’s cause until Tino Best disturbed his woodwork.

In the end, the injury prevented Dhoni from keeping wickets during the West Indian pursuit and also ruled him out of the rest of the series. Perhaps, the time has come where his body wouldn’t respond to all the rigorous demands of modern cricket — which have been particularly severe in his case.

**includes the latest tri-series encounter between India and Sri Lanka

Sri Lanka’s Mahela Jayawardene and Kumar Sangakkara come very close to Dhoni’s tally as they have played over 340 matches since the stipulated date. If one brings the Indian Premier League (IPL) into the picture, Dhoni is far ahead as he has featured in 96 games for the Chennai Super Kings when compared to Jayawardene’s 80 and Sangakkara’s 71. Since, Chennai have also featured in the last three Champions League T20s (CLT20) by virtue of their consistency, Dhoni’s match count goes even higher.

Dhoni wears three hats on the field of play — that of a captain, batsman and a wicketkeeper. Juggling these responsibilities is no easy task and the pressure intensifies when he leads India. As a batsman, he is no longer the slogger who only ups the ante and has the freedom to express himself. He has tempered his approach and the team relies on him. In pressure situations, he is their trump card and the most dependable finisher. Dhoni the wicket-keeper is stable, but not spectacular. He may have had a few tough series’, but has done a fairly good job with the gloves.

All these details only go on to reflect Dhoni’s supreme fitness and unique mental approach. Despite playing so many matches as a wicketkeeper-batsman, he has kept himself incredibly fit and has hardly missed a game due to injury. There were a few niggles and bans that kept him out, but he has been on the field of play for a long time. Through all that, he is an incredible picture of calm and approaches every situation with a monk-like temperament be it a tournament final or a normal game.

Through the 1990s, Sachin Tendulkar was one player who rarely missed an international encounter. Being India’s mainstay and one of the best batsmen in the world, he shouldered great expectations and humongous pressure. His aura transcended the cricket field as even then he was not merely a player, but an icon a nation looked up to. It is fair to say that Dhoni as an icon is only second to Tendulkar. The pressure Dhoni faces is different when compared what Tendulkar handled in his prime. However, let us compare the number of international games played by the two during the first nine years of their career.

Here are the numbers:

Dhoni hasn’t completed his ninth year in international cricket and yet he has played more internationals than Tendulkar at a similar stage — by a huge margin at that. During Tendulkar’s time, there was no IPL, a tournament that is cramped in the space of two months and the cricketers are on the go. Although, Tendulkar did make the odd appearances in domestic cricket, those games wouldn’t total up to the number of IPL matches that Dhoni has played in the last few years. Thus, Dhoni’s workload has been more severe when compared to Tendulkar — someone who has been the epitome of commitment to the Indian cause.

For some reason, Dhoni has been a subject of a lot of criticism despite his enviable trophy cabinet. Even when he has opted out of a few games to take a breather, critics have come down hard and questioned his commitment. The latest instance came in November last year when he did not turn up for Jharkhand in the Ranji Trophy even as his India teammates got into the groove by featuring for their respective state sides.

That a man has only missed the odd international was of no concern to the critics as it was an opportunity they didn’t want to let go. Not only that, but they also did not consider the three hats he wears on the field. Doesn’t he deserve the odd break as that would only help him recharge his batteries and stay fresh for the next encounter?

One factor that isn’t usually considered while measuring a cricketer’s workload is travelling. Modern cricketers have to board innumerable flights to travel from one venue to another. In a country like India, where ODIs are played in the smaller centres, direct flights are rarely available and teams have to fly to a big city and then move towards their intended venue. Considering the number of games Dhoni has played since his international debut, one can only imagine the number of flights he would have taken. That too is a stressful aspect for any sportsman. Steve Waugh, the former Australian captain, was diagnosed with Deep Vein Thrombosis (DVT) and a part of the reason was a long flight. Travelling can be merciless.

Dhoni’s latest injury may only be due to fatigue given his intense workload. It may be the body’s way of telling him to take things easy. He isn’t getting younger and at the age of 31, he is heading into a phase of his career where his body wouldn’t take the load as easily as it did during his younger days. Keeping the 2015 World Cup in mind, Dhoni can pick and choose some of the ODI assignments. For example, he can skip the Zimbabwe tour later this month even if he is fit. India need to get the most out of him, but must also protect its golden goose.