The countrymen seem to have resigned themselves to a whitewash as the Indians go into the third Test on the fast and bouncy wicket of Perth. However, Arunabha Sengupta reaches into the archives to extract elements of hope and discovers that a turnaround is very much possible. Eighteen-year old Sachin Tendulkar, pushed prematurely into adulthood to portray the last man standing, counter-attacked with some of the most fascinating weaponry ever witnessed in the country © Getty Images

The countrymen seem to have resigned themselves to a whitewash as the Indians go into the third Test on the fast and bouncy wicket of Perth. However, Arunabha Sengupta reaches into the archives to extract elements of hope and discovers that a turnaround is very much possible.

There is something in the name Perth that curdles the blood of Indian fans.

The flickering images of memory seem to recollect balls whistling past the helmet grill, thudding into the gloves of the keeper within a blink of leaving the bowler’s hands. The famed pace and bounce of the wicket makes it one of the most dreaded surfaces for an Indian batsman –  pampered performers brought up on a steady diet of pitches where all you have to do is to plonk your front foot forward, with all the bowler’s strength failing to raise the ball higher than the knee roll.

Yet, as we often realise in retrospect when we wade through unbiased documentation in the record books, memory does play us tricks. And when it is cricket, a game washed and eroded by the tidal waves of passion and emotion, the perceptions can indeed be coloured by fancy mingling freely with facts.

Historically the most favourable venue for the Indians

Set between the scenic flow of the Swan River and the green expanse of the Queens Gardens, the Western Australia Cricket Association (WACA) ground is legendary for its hard, bouncy and lightning quick wicket. True, the Australians have an enviable record at the venue, with 22 victories and nine losses in the 38 encounters since the first Test was played here in 1970. More often than not the victories have been emphatic with the hosts utilising of the conditions to the hilt.

However, India’s association with the ground is one of the more memorable across the wide continent which has been intensely cruel to their cricketing chronicles.

At the WACA, the Indians have played on three occasions winning once and losing twice, the first of the defeats by a wafer thin margin. It is by far their best record across the Australian venues, with the skirmishes elsewhere showing 1-5 apiece in Sydney and Adelaide, 2-8 in Melbourne and 0-4 in Brisbane.

Contrary to a lot of fables about the stuttering steps to chin music, the scores tell us that it is in this amphitheatre that Indians have often found rhythm. Sometimes their performances have struck up triumphant tunes, and even the melancholic drones of defeat have been accompanied by notes of optimism.

In 1977, during their first experience on the turf, India took on a depleted Australian side. Bobby Simpson, called back from retirement, led the hosts with most of their big stars busy jumping through the hoops of the Packer circus.

India started strongly, scoring 402 and sneaking ahead by eight runs in the first innings, in spite of a dogged 176 by the veteran Australian skipper. Centuries by Sunil Gavaskar and Mohinder Amarnath took them to 240 for one at one stage in the second innings, before a collapse was triggered by debutant John Gannon.

Even then, the target of 339 was a steep one with captain Bishan Singh Bedi scalping five second innings wickets to end with 10 in the match. But, night watchman Tony Mann stuck around to make a hundred and the hosts scraped through by two wickets with 22 balls remaining.

The second Test between the two sides at the venue took place 14 years later, on one of the fastest wickets ever seen in the land. In the flames of fiery pace, a reputation was forged which would go down as one of the greatest in the history of the game.

Down 3-0 in the series, India collapsed to 159 for eight in reply to an Australia’s first innings of 346.

With Craig McDermott, Merv Hughes, Mike Whitney and Paul Reiffel breathing fire and sending down balls that zoomed through as fuzzy red streaks, 18-year old Sachin Tendulkar stood there, the Boy Wonder pushed prematurely into adulthood to portray the last man standing, counterattacking with some of the most fascinating weaponry ever witnessed in the country. While the innings crumbled in ruins around him, square cuts stamped with his sterling signature sped from the bat, scorching the turf and kindling the imagination of the intoxicated cricket lover. Running out of partners on the third morning, he raced to his second 50 in 55 balls, and ended with 114 runs of unquestionable pedigree. The rest of the batting, though, refused to be inspired and an abject surrender in the second innings resulted in a 300-run loss.

If the first two showdowns involved gallantry in defeat, the beleaguered Indian side should find the brightest glimmer of hope, robust straws of encouragement in the current quagmire of desperation, from the last Perth Test that they played.

In 2008, coming in with the exact same score-line, pitted against the four pronged pace attack of Brett Lee, Mitchell Johnson, Stuart Clark and Shaun Tait, a professional display of surgical precision turned it around for the visitors, bringing them victory, honour and the tag of favourites when all but the most optimistic had written them off.

Rahul Dravid and Sachin Tendulkar fired in the first innings, VVS Laxman in the second, and every bowler stuck to his task with length, line and discipline, conquering the Australian pace attack in their favoured backyard.

It was Australia’s first defeat at home since Adelaide 2003, and the first at Perth since 1997.

The record books, thus recovered from the shelves, dust of disillusion cleared away to look at the lines, reveal important trends – as heartening as it can get in this situation.

The Aussies can indeed be beaten at Perth. The Indians have done it before. It is at this very venue that they have come back from a 0-2 deficit earlier, turning things around when the odds had been stacked up against them, tottering on the brink of burying them in negativity.

Will the WACA once again witness a revival, to breathe life into the Indian performances, to resurrect the series into the intense battle it was originally touted to be?

History certainly says that it is possible … 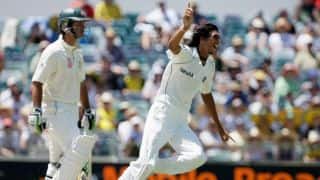