No more captaincy for MS Dhoni in IPL: End of another era

No more captaincy for MS Dhoni in IPL: End of another era

Dhoni won't lead RPS, his IPL franchise, in the 10th season of the cash-rich league. He will not be seen leading any side at any level now.

When MS Dhoni stepped down as Team India captain from Tests back in December 2014 and from the limited-overs format earlier this year ahead of home series with England, one thing was common serenity. There was no anticipation, but it is Dhoni after all. Will he quit on his own or won t he, was the question. The team was losing, runs were not coming, and things were not falling in place. And then he takes everyone aback, with the usual serenity the one which is visible in his demeanour every time he is on or off the field. Many a thing has passed under his calm brow: wins, losses, anger, joy. He, however, has never let the world know what transpires in the space between his ears. There was no chaos. He quietly stepped down, clearing the way for his successor Virat Kohli.

On a lazy Sunday when the media houses were trawling for news, Dhoni gave them one and that too in his typical nonchalant manner. He quietly stepped down as the captain of Rising Pune Supergiants (RPS), his Indian Premier League (IPL) franchise, just more than a month ahead of the 10th season of the cash-rich league. But unlike previous occasions, there was some turbulence this time around.

The first news that came out said Dhoni was sacked from captaincy. Ouch! Could they really sack him? You can t dethrone a king, some said. RPS testified Jesus Christ s words that a prophet has no honour in his own country, a friend said. Harsh reaction this but was understandable, for Twenty20 (T20) cricket and IPL were Dhoni s territory. The man had won India the inaugural ICC World T20 in 2007 and prophesised that the win will revolutionise T20 in India. He led Chennai Super Kings (CSK) to two IPL titles. For a long, long time, IPL meant CSK and Dhoni to many. Yes, this was his territory. Could they dethrone the king?

Then came the clarification. Dhoni himself had stepped down. Ah, a sigh of relief, for by then, all thoughts were leading to how dare they?

With Dhoni relinquishing the IPL captaincy, he will not be seen leading any side at any level now. This is going to be the first IPL season minus Dhoni the captain. It was almost impossible to imagine such a thing till some time back IPL without Dhoni s CSK. But it happened. Dhoni turned out for RPS last year. His fans half-heartedly (though) but lent their support to the Pune franchise, only because their Thalaiva was leading them, for there still was Dhoni, the leader, playing IPL.

IPL 2017 is going to be completely different now. RPS will be led by, in all probability, Steven Smith. Dhoni will be seen playing under him. Leading the side to the best of his ability in spite of the limited bowling resources was the hallmark of Dhoni s captaincy. His successor may come in with fresh ideas, new strategies, and different plans.

Just like Dhoni ensured he did not leave Team India in turmoil, he has made sure the transition in RPS is as seamless. In Smith (and Faf du Plessis), the team has leaders with proven track record. He will anyways be around and happy to help, just the way we saw him support Kohli. His fans may be disappointed to see him not lead the side, but will get to see him play the role of mentor. That should give them some solace.

Fans, in fact, will also have a lot to cherish for. They have long yearned for vintage Dhoni. They would want to see Dhoni the destructor, freed from all responsibilities, going out in the middle and having fun with the willow every single time. They would not have forgotten how Dhoni smashed two sixes off the last two balls in their last league game in IPL 2016 and helped RPS avoid the wooden spoon. They still cherish Dhoni smashing 18 runs off 4 deliveries in the last over bowled by Irfan Pathan in IPL 3, which helped CSK avoid early elimination. The fans will want to see more of this in IPL 2017.

However, after these years of glory, we anymore won’t see MS Dhoni (c & wk), anymore…

PS: There was more to the madness. By the time you finish writing, another development surfaces. Dhoni has not stepped down. We have appointed Steve Smith as the skipper,” RPS owner Sanjiv Goenka tells PTI. “Frankly speaking, we did not have a good last season and we wanted someone young to lead the side and revamp it ahead of the upcoming season 10,” he adds. This is bound to irk Dhoni s long legion of fans. The man himself, however, will take it in his stride. Someone like him, who has always remained the same in failures and success alike, won t mind it much. Captain or not, a warrior that he has been, Dhoni will give his all when he takes field for RPS in IPL 10. 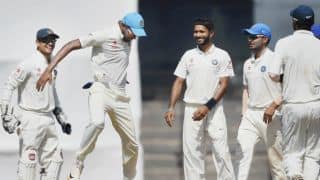 India A vs Australia, warm-up match at Mumbai ends in draw 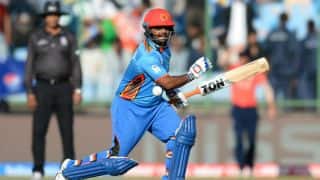