Dhoni has shown his ability to bat up the order, though he has made the No 7 position his own.

MS Dhoni, born on July 7, 1981, celebrates his 33rd birthday today. Bharath Seervi lists out the top 10 innings across formats of the Indian captain and finisher par extraordinaire. These are not necessarily his highest scores, but his most impactful innings — whether cameos or finishes.

Predictably, the unbeaten 183 against Sri Lanka at Jaipur stands out from the rest. It was the first time Dhoni the finisher came to the fore. His 148 against Pakistan at Visakhapatnam showed a glimpse of his big-hitting, but it was this knock that truly announced his presence.

Dhoni has, over the course of his career, has played some superlative knocks. He has shown his ability to bat up the order, though he has made the No 7 position his own. Jokes are made about his tendency to take the match till the final over, but invariably the pressure on the bowler when this happens is far more than the pressure faced by Dhoni himself. Below are 10 of his greatest knocks.

It was the ICC 2011 World Cup Final. India were chasing a target of 275, and were 114 for three in the 22nd over. Dhoni came to bat ahead of Yuvraj Singh, who was in a prime form. A 109-run partnership with Gautam Gambhir for the fourth wicket brought India close to victory. He ended with an unbeaten 91 off 79 balls with eight fours and two sixes with the second being the winning hit.

India’s score was 29 for five in the 10th over, but got to a respectable 227/6 after 50 overs, thanks to a Dhoni master class. Though India lost the match, it was one of the best efforts to recover a team. He shared partnerships of 73 with Raina and an unbroken 125 runs with R Ashwin. He scored 113 not out off 125 balls with seven fours and three sixes.

India lost its first three wickets for seven runs in the first two overs, and five more before the score had reached 100. Dhoni kept hold of one end, watching as wickets kept falling at the other. He had a partnership of 101 runs with RP Singh for the ninth wicket. India were all out for 188 in 48.2 overs, and lost the match. However, it was a tremendous inning by the skipper, who waged a woefully lone battle.

This is one of the best innings played by Dhoni in his Test career. India was chasing 380 in their fourth innings against England at Lord’s. The target was highly unlikely. They began Day Five with three wickets down for 137 runs. Soon they were five down for 145. Dhoni had a partnership of 86 with VVS Laxman for the sixth wicket, but wickets kept falling. With the score reduced to nine down for 263, Dhoni ended up facing 159 balls in the match saving innings. Due to bad weather and rain, the final session was not played and the match ended in a draw. India went on to win a Test series in England for only the third time in their cricketing history.

Australia scored 380 in the first innings. India lost four wickets before reaching 200. Dhoni batted at No 6 and took India’s score to 546 before being the ninth wicket to fall. He scored his maiden double century, and became the first Indian wicketkeeper to score a double century in Test cricket. His 224 is also the highest score by an Indian captain. His innings saw him smash 24 fours and six sixes.

India was playing against the hosts at Durban without Yuvraj, who was the star of the previous match against England with his six sixes off one Stuart Broad over in the ICC World T20 2007 match. The first four wickets were lost for 61 runs in the 11th over. Dhoni put on a crucial partnership of 85 runs with debutant Rohit Sharma, and took the score over 150 at the end. Dhoni scored 45 off 33 with four fours and a six.

Entering the final Test of the series, India were trailing 2-1 against England at home after their 4-0 whitewash during the England tour. The visitors managed to put on 330 runs in the first innings. India needed to score enough runs to win the match and equal the series, but they lost four wickets for just 71. The third loss of the series was on its way till a 198-run partnership for the fifth wicket between Dhoni and Virat Kohli brought some relief for the team. Dhoni faced 246 balls for what would have been a well-deserved century, before being run out on 99. India scored 326 runs in their first innings. India couldn’t win the match, but captain’s innings saved the match for India.

India had the opportunity to take advantage of Pakistan’s first inning score of 231. But the batsmen at top order failed at the Delhi pitch, as the score was five for 93 before Dhoni arrived. VVS Laxman and Dhoni added 115 for the sixth wicket to take the team out of trouble. Dhoni scored 57, and the only other to score more than him was Laxman (72 not out). India got a lead of 45 runs as they completed a victory over Pakistan.

It was the final of the tri-series between India, Sri Lanka and West Indies in West Indies. Sri Lanka made 201 batting first. The Indian top order had a slow start in the small target. Dhoni arrived with the score four down for 139 in the 32nd over. India required just 63 runs from 113 balls, but wickets kept falling and not many runs were scored in the period. Ultimately, they required 15 off the last over with nine wickets down. Dhoni smashed two sixes and a four in the last over, bowled by Shaminda Eranga, to win the trophy for India. 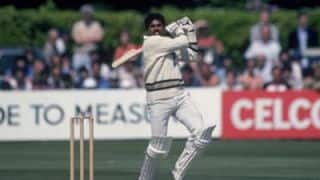