MS Dhoni vs Eoin Morgan, Yuvraj Singh vs Moeen Ali and other key battles from India A vs England warm-up clash

MS Dhoni vs Eoin Morgan, Yuvraj Singh vs Moeen Ali and other key battles from India A vs England warm-up c

January 10, 2017. Mark the date. For one last time, in the national blues, we will get to watch MS Dhoni flip the coin.

January 10, 2017. Mark the date. For one last time, in the national blues, we will get to watch MS Dhoni flip the coin (in all probability, without Ravi Shastri s MS to spin the coin reverberating across the ground). With this, will end an era if it has not, already, with Dhoni resigning from India s limited-overs captaincy last week. But the one last time emotion will be enough to draw spectators to Brabourne Stadium, venue for the warm-up match between India A and England on Tuesday. There is enough spice in the ingredients of this Mumbai clash to ensure that the game will be followed with great interest.

Results do not matter in these practice matches, but Dhoni leading the Men in Blue for one last time, his teammates will settle for nothing less than a win as a farewell gift. Meanwhile, Eoin Morgan s England have been a vastly improved side. They have buried the ghosts of ICC World Cup 2015 and have developed as a ruthless competitor in the shorter formats. ICC World T20 2016 was played in these conditions and they finished runners-up. The visitors will desperately want to open their win account in this tour to carry the momentum ahead. Ahead of the first warm-up one-day match, Suvajit Mustafi looks at the possible key-battles.

Hardik Pandya vs Ben Stokes: Both men bowled memorable last overs in World T20 2016, albeit with vastly contrasting results. Pandya’s final over against Bangladesh saw 3 wickets fall as India clinched the game by a run while Stokes failed to defend 19 in the grand finale against West Indies as Carlos Brathwaite marched to legacy with four bludgeoning sixes. That is not the story here.

The fact that their skippers trust them with the ultimate over is a testament to their ability. Stokes, the more established name of the two, is on his way to fill in the huge boots of Ian Botham and Andrew Flintoff. Pandya, like Stokes, is a feisty character who can give the ball a clean whack and can clock good pace.

While Stokes carries a proven reputation, Pandya s comeback from injury has been good with successful outings in the ongoing DY Patil T20 Tournament. He came very close to smack a hundred in the first game.

Both men will play similar roles for their sides. One s performance eclipsing the other will naturally swing the game in his side s favour.

Ashish Nehra vs Jason Roy: This will be a contest worth the hype it has still not managed to attain, but that is for T20Is. Roy s fireworks at the start have played a triggering role in efficiency of the English fireworks that keep firing match after match. He is outspoken in his blogs and continues to express freely with the blade as well. His ODI strike rate stands at 103.74.

Nehra, 37, is a T20I specialist these days. Why he is playing the warm-up one-dayer remains a mystery. The only reason could be is to test his fitness.

Roy will look to attack Nehra, but the wily old fox has experience aplenty under his belt. He knows a thing or two about wreaking havoc in line-ups. Roy was still a preteen when Nehra had dismantled his country with 6 for 23 at Durban.

They had missed out squaring against each other in the World T20 but this time we will be up for this treat.

Yuvraj is amongst the greatest Indian cricketers to have played this format, but he is making a comeback after more than three years. A good show can see him cement his place in the side in the competitive Indian middle-order for the first ODI this Sunday.

Batting in the middle-order, he will face a lot of Moeen. While Yuvraj is not particularly comfortable against off-spin, at the same time once set, he can explode any attack in a matter of time. England have memories of a ruthless Yuvraj from 2008.

Moeen adds a lot of dimension to the English side. He is explosive with the bat and can bowl effective off-spin. This contest however will be more of Yuvraj the batsman and Moeen the bowler.

MS Dhoni vs Eoin Morgan: Leading his men in blue outfits to a win for one final time? That is what we think will be on Dhoni s mind, a riddle that best of brain scientists have failed to explore. For all we know, he cares least of the result and will approach this as a task entrusted upon him and look ahead to the term he uses most process .

This will, in all probability, be Dhoni s last match as a captain of a representative India side. Emotions will flow more from the world around him than from the man himself. But a win is what his teammates will eye to gift him.

The result may not be of particular relevance. Dhoni will look forward to ensure he and his boys get the much-needed practice ahead of the 3-ODI series against the same opponent. At the same time, he will take cue from this English side and pass it on to the new skipper Virat Kohli.

Similarly, for Morgan, how much to reveal his forces will be the key as India have not played enough of these new English boys in recent times.

Morgan will be keen to open England s win account at Brabourne. The city has been a lucky charm for the Englishmen. However, even if they do not win, Morgan will not be too perturbed as he has seen quite a lot of storm in his career.

He has surpassed most to earn respect among English fans and make them believe that they can be a force in limited-overs cricket too.

The Morgan-Dhoni battle will begin with the toss. A right call can help either side to eliminate the dew factor that can cause serious grief especially in subcontinent winters. 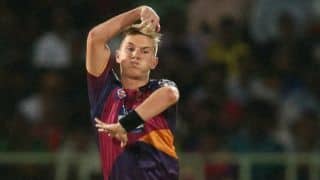