Dhoni's presence as a captain, who has experience of two tours to England, will be crucial.

Apart from a half-century at Trent Bridge and taking nine catches in the series, MS Dhoni has not done much to be called as one of the key players for the third Test against England to be played at Rose Bowl. However, his presence as a captain, who has experience of two tours to England, will be crucial. Sudatta Mukherjee writes how Dhoni’s tactics will be important for India’s win at Southampton.

When the current Indian squad to England was announced, there were only three men with prior experience of playing Tests in the country. An injury-struck (and of late, out of form) Gautam Gambhir aside, the other two are Ishant Sharma and MS Dhoni.

Ishant faced a lot of criticism ahead of the England tour for his poor (and rather long) streak of under-performances. In the last 12 months, till the start of the first Test at Trent Bridge, Ishant had played four Tests and his bowling average was 34.50.

However, Ishant’s awe-inspiring spell of seven for 74 at Lord’s in the second innings has (at least for now) silenced his critics; however, the lanky fast bowler himself credited the skipper  at the post-match presentation. Ishant revealed how Dhoni insisted he bowl short, which saw the bowler picking up picking up quick wickets inside tea as India went on to win at Lord’s after 28 years.

Dhoni, despite not being at top of his form (and with Test numbers significantly inferior to his One-Day International (ODI) numbers), is one of the best captains India have produced. After a poor 2011 series, and the first Test at Trent Bridge this time ending in a draw, it would have taken a Buddha-like calm and composure for the skipper to guide a young team to a Test win at Lord’s after so many years. India will surely be high after the win but they should not get carried away by the feeling.

This is where Dhoni’s experience and leadership role will matter the most. Not only that, Dhoni is probably one of those captains in the world who have won more games depending on quick strategies.

When it comes to using his bowlers, Dhoni has a tendency of making a spinner bowl from one end and a seamer from the other. This provides an attack plus defends strategy at the same time. At one point in both the Test matches, Dhoni made Ravindra Jadeja bowl from end and Ishant or Stuart Binny from the other. After Moeen Ali‘s wicket fell and Lunch, England played 12.2 overs, scored only 49 runs. In those 12.2 overs, England lost five wickets. Throughout this time, Dhoni had persisted with Ishant and Jadeja.

Apart from persisting that Ishant kept bowling those short balls, which helped the pacer take five of the seven wickets he picked up, Dhoni had a tendency of bringing in Jadeja at a very early stage in the second innings to bowl. Jadeja was brought on to bowl in the second innings at Lord’s in the seventh over of the innings. With the first ball, he removed Sam Robson.

Also, Dhoni has been seen to stand far away from the stumps for the spinners. This is something that no other wicketkeeper has been seen to have practiced (at least at the highest level). Dhoni later revealed his reasons after the Lord’s Test.

He said, “I wanted to have was a fielder there. But according to the rules, you can’t have three fielders there. I wanted Virat [Kohli] to stand slightly wide of where he was standing because anything like a faint edge on the leg-side would go between me and him. So the plan was to stand behind and cover that. But if the batsmen kept stepping out, I had to go in. They didn’t really step out so I had the liberty of standing back and trying to catch the ball at both ends but nothing really came to us.”

Probably playing his last Test tour to England, the result at Rose Bowl will be of much importance going ahead in the series. If England strike back and level 1-1, India will have to play really well at Old Trafford and The Oval to make sure, the host neither draw the series or wins. If India go to Manchester with 2-0, the visitors will play with a lot less pressure than going to the fourth with the series 1-1. In the end, it will be Dhoni, whose captaincy and experience will either guide India through a successful third Test or make them stumble. 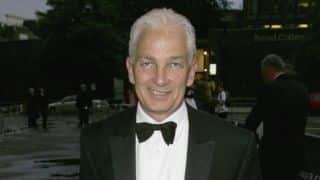