The partnership of 118 between MS Dhoni and Hardik Pandya lifted India from 87 for 5 to 281, and then the bowlers had their say.

Dhoni, Pandya end Australia s Chennai honeymoon: Australia locked horns with India at Chennai in ODIs after almost 30 years. Their first meeting had ended in a defeat in 1987. Since then Australia played 3 more ODIs at the Chepauk and won all of them. Coming to this game, they had a 4-0 win record at Chennai.

The partnership of 118 between MS Dhoni and Hardik Pandya lifted India from 87 for 5 to 281, and then the bowlers had their say. Pandya also chipped in with 2 wickets and Dhoni affected 3 dismissals.

Century of 50s: Dhoni registered his 100th international fifty. He became the fourth Indian to achieve this feat after Sachin Tendulkar, Sourav Ganguly and Rahul Dravid. Dhoni also became only the second wicketkeeper-batsman after Kumar Sangakkara to reach this feat.

Dhoni topples Azhar: Dhoni is now the fifth highest run-getter for India. When he reached 22, he breezed past Mohammad Azharuddin s tally of 15,593 runs for India across formats. Dhoni now has 15,651 runs for India. Mind you, he has played for Asia XI as well. He is only behind Tendulkar, Dravid, Ganguly and Virender Sehwag.

Dhoni enters Tendulkar s club: Dhoni became the second batsman after Tendulkar to amass 4,000 ODI runs at home. Tendulkar leads the chart with 6,976 runs while Dhoni is at the second spot with 4,055 runs. Only Yuvraj, Dravid, Kohli, Azharuddin and Ganguly are the other individuals with over 3,000 ODI runs in India.

Pandya s habit: This is fourth time Hardik Pandya has hit a hat-trick of sixes in international cricket this year. The first two instances were in the Champions Trophy, first of Imad Wasim and then Shadab Khan in the final. He then made Malinda Pushpakumara his victim en route to his maiden Test century. On Sunday, the victim was Adam Zampa.

Bradman of Chennai: Dhoni is a demigod of Chennai. He is also the Bradman of Chepauk. Dhoni now averages 100.25 from his 6 ODIs in Chennai. His strike rate at this venue reads 101.8. Not to forget, he slammed his Test double-ton against the same opposition in 2013.

Dhoni s affinity towards Faulkner: Dhoni now has slammed 8 sixes against James Faulkner in ODIs. This is the most he has hit against any bowler. Earlier the honours belonged to Tillakaratne Dilshan and Shane Watson. He had him them for 6 each.

Dhoni since Champions Trophy: Is Dhoni good enough for 2019 World Cup? A question that has been sparking curiosity in the cricket fraternity since India s defeat to Pakistan in the final of 2017 Champions Trophy. Since then, Dhoni has played 11 matches, 9 innings, registered 7 not outs and scored 395 at 197.5. His strike rate, however, is a low 79.

Kohli s famous duck: Australia once again managed to keep the Indian skipper quiet. Virat Kohli got out for a rare duck. In fact, the last time he got out for that score in India was in 2013. Coincidentally, the opposition was Australia and the venue was Bengaluru. The game is best remembered for Rohit Sharma s 209.

Kohli s milestone win: This is Kohli s 50th win as Indian captain. He became the fifth Indian captain to achieve this feat, the others being Dhoni, Ganguly, Azharuddin and Dravid.

Kohli goes past Dhoni: Kohli now has 10 consecutive wins as Indian captain across formats. The previous best was 9, by his predecessor Dhoni.

Ok, some Australian stat-facts too

Faulkner s 1000th: Faulkner s 25-ball 32 not out got Australia close. During his stay, he completed his 1,000 runs for Australia. He became the 42nd Australian to enter this club. With 1,020 runs, he now has four more runs in ODIs than Shane Warne. Had Faulkner got a five-for, he would have also completed his 100-ODI wicket tally.

355-day drought:Australia s last ODI win away from home was on September 27, 2016. The win came against Ireland at Benoni, South Africa. Since then they have faced 9 away defeats and 2 have been abandoned due to rain. 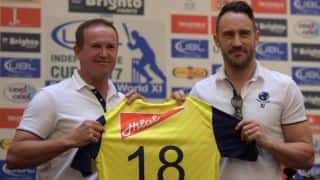