Indian skipper MS Dhoni has reasons to worry. ​His bowling unit has cons​consistently failed,​ and on Tuesday his batsmen collapse​ against a rampaging Steve Finn.

Indian skipper MS Dhoni has reasons to worry. ​His bowling unit has cons​consistently failed,​ and on Tuesday his batsmen collapse​ against a rampaging Steve Finn.

The Indian bowlers have been so listless that they haven’t managed to take 20 wickets in a single Test against Australia in the recently​-​concluded Test series. And much to their horrors, in a month’s time they will be up against AB de Villiers. If the Warners and Smiths were not enough, they now face the daunting task of bowling to a freak batsman who has just belted a 31-ball century.

India face South Africa on February 22 at Melbourne Cricket Ground (MCG) in a Group B clash. In a plan to counter the South African captain, the Indian team was spotted on the roof of MCG.

Vice-captain Virat Kohli, baffled with the situation was overheard by our source asking Dhoni, “Skipper, what are we doing here?”

Dhoni reminded the batsman, “Bhul gaya kya (Forgot or what)? Feb 22 we play against AB [de Villers] here at MCG. We’ll practice fielding for that.”

Kohli thought being the vice-captain, he knew the rules well. Still curious, he questioned, “How will this help? Will they still not be six runs?”

Dhoni smirked, “At least you will not have to lead a team with Ambati ​Rayudu as the wicket-keeper in the next match.”

There were some confused glares at Dhoni as they didn’t get the sub-text implied by the Indian skipper. Dhoni clarified, “At the roof,​ you guys can stop those de Villiers’ sixes and save time! Over-rate slow hoga toh lagegi toh meri hi ha (My collar will be caught if we don’t maintain over-rate?)”

Captain Dhoni is after all called smart for nothing. 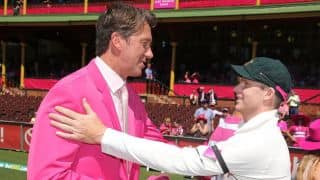