MS Dhoni's greatness as an ODI batsman in figures

MS Dhoni's greatness as an ODI batsman in figures

During his incredible unbeaten 113 against Pakistan at Chennai, MS Dhoni went past 7,000 runs in ODIs. Abhishek Mukherjee compares him with the giants of the 50-over format of the game. During his incredible unbeaten 113 against Pakistan at Chennai, MS Dhoni went past 7,000 runs in ODIs. Abhishek Mukherjee compares him with the giants of the 50-over format of the game.

Mahendra Singh Dhoni played what was arguably his most important innings in One-Day Interntionals at Chennai on Sunday. His unconquered 113 to rescued India from the depths of despair – 29 for five – to a total that gave the Indian bowlers some hope against arch-rivals Pakistan. This, however, has not been the first time that Dhoni has played a sublime innings to save his side. He also went past the 7,000 run mark in ODIs during the course of his epic knock.

Indeed, amidst all the disputes regarding whether he should be retained as the national skipper, Dhoni has been one of the giants of the game himself. Let us draw up some numbers to show how he features against the other greats of the 50-over version.

To begin with, if we put a 7,000-run cut-off, Dhoni leads the way, averaging more than six runs per innings than Michael Clarke, the next name on the list:

However, when we consider ODIs, the other parameter that needs to be considered is the strike rate. Here, too, Dhoni features among the top five. It should be noted that none of the batsmen above him on the list comes within 15 runs of Dhoni in terms of batting average:

We can, of course, combine the two parameters to obtain a combined number. We will use a harmonic mean to combine them:

However criticised Dhoni’s captaincy might have been in recent times, it cannot be argued that his performances as a captain are next to none in the 50-over format. Once again, we can see a 15-run per innings lead over the next batsman on the list, Ricky Ponting, if we put a 3,000-run cut-off:

In terms of strike rates, too, Dhoni is third on the all-time list. Two giants of the game come ahead of him, but both of them are almost 19 runs short of Dhoni in terms of batting average:

ODIs have changed the role of the wicket-keeper significantly over the past quarter of a century or so. Some of them have opened the batting, while some others have played crucial roles down the order. With a 3,000-run cut-off, Dhoni is once again way clear of his next competitor, Kumar Sangakkara:


Despite the fact that Dhoni has had to play a pivotal role in India’s ODI successes, he has been able to maintain a healthy strike rate. The explosive Adam Gilchrist leads the way, but he averages significantly less than Dhoni, who is right up there with the best:

As usual, if we combine the two parameters, Dhoni stays clear of the Gilchrist, the second man on the list:

Dhoni has also played a pivotal role in India’s ODI success stories, culminating in a World Cup victory last year. His performances have put him 10 runs ahead of another great match-winner in the history of ODIs – Michael Bevan:


Along with a healthy average, Dhoni has also maintained a healthy strike-rate in victories. Other than him, the four batsmen in the top five are all blasters, and their averages are nowhere remotely close to Dhoni’s:

Once again, if the lists are combined, the bridge between Dhoni and the rest is quite substantial:

In spite of Dhoni’s supremacy in all the lists, what really separates Dhoni from the rest are his performances in successful chases. If we put a 2,000-run cut-off, Dhoni is so ahead of the rest in the world that the gap is almost Bradmanesque: the others are not even comparable:

Even though most of Dhoni’s efforts in successful chases have involved hard-fought recoveries from tight corners and even shepherding the tail, he has managed to make it to the elite list; and despite the fact that he just misses out being in the top five, he is significantly ahead in terms of the others above him on the list:


As usual, if the lists are combined, he has such a significant margin ahead of the others that they seem almost pale when put into perspective:

* Reasons for choosing a harmonic mean:An arithmetic mean, (Average + Strike rate)/2 would have meant adding up two numbers with different denominators (number of times dismissed and number of balls faced), albeit with the same numerator.

A geometric mean, (Average * Strike rate)1/2 would not have made sense for the similar reason.

However, in case of a harmonic mean, we add numbers with the same denominator (number of runs scored), which is more comprehensible and is likely to provide a more accurate measure of the greatness of the batsman. 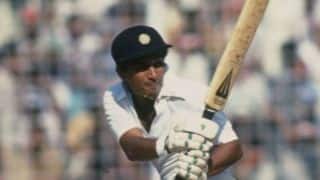