Dhoni’s batting certainly got a push by the extra responsibility of captaincy.

Before anyone could make what was going on, MS Dhoni shocked the entire world of cricket by announcing his retirement from Test cricket. Abhishek Mukherjee looks at the man.

Remember the third Test against Australia in 2008-09 at Kotla? Anil Kumble had dropped a bombshell at tea on Day Five, announcing his retirement with immediate effect. Kumble had earlier missed a Test in the series. MS Dhoni, who had led India before (with Kumble ruled out due to injury), became the full-timer. When India won the series in the last Test at Nagpur, Dhoni had made sure he would share the Trophy with Kumble.

Six years after the incident, Dhoni did a Kumble — once again, against Australia. He had missed a Test in the series as Virat Kohli had taken over. Then Dhoni came back, and without any prior warning, announced retirement with immediate effect. Kohli will lead India at SCG, and will (unless something bizarre happens) be appointed full-time Indian captain.

Dhoni does not have a single international hundred (in any format) outside Asia. His batting records in Australia are abysmal. He has got fantastic numbers in New Zealand and Pakistan. He has been good at home, and has done a competent job in England. In general, he has put up an acceptable show with the bat over the years.

Surprisingly, all averages go up a notch when he has led India. Some have failed to perform under the pressure of captaincy (Ian Botham was perhaps the biggest example of this); some others have thrived (Imran Khan, for example); Dhoni belonged to the second category.

Hang on — I have already started writing of him in the past tense!

But let us move on. Dhoni’s batting certainly got a push by the extra responsibility of captaincy. In fact, he finished as the highest run-scorer among Indian Test captains (he went past Sunil Gavaskar today). This is an exceptional feat, given that he had performed a third duty as well: that of keeping wickets.

Dhoni is the only Indian wicketkeeper to score 3,000 Test runs. In fact, he finished with 4,876 Test runs — over 2,000 more than Syed Kirmani, the next name on the list. He averaged 38 with the bat, while Kirmani averaged 27; Farokh Engineer, who appears just above Kirmani, had 2,611 at 31.08. Of wicketkeepers, only Adam Gilchrist and Mark Boucher have scored more runs.

Had Dhoni been a batsman, a wicketkeeper, or a captain — or even two of the three — his career would have been somewhat unremarkable. Dhoni’s biggest credit has probably been to perform all three roles over a period of six years.

He had taken India to the top rank in ICC Test rankings; On the other hand, Dhoni’s India had been at the receiving end of whitewashes in England and Australia. In a period of a year, Dhoni has suffered series losses in South Africa, New Zealand, England, and Australia. On the other hand, there is that singular achievement of leading against Australia in eight Tests and winning all. He averaged 64 in these Tests and claimed 33 dismissals.

Just like his batting, Dhoni’s wicketkeeping has not been copybook. He did stay low the way many do. Even at MCG he did not dive for one that fell short of Ravichandran Ashwin at first slip: most wicketkeepers would have gone for it. Dhoni was not an outstanding wicketkeeper, no: but he was sound. He would probably not have made it to the side had he not been competent with the bat. But the dual role made him a sure selection for a long time.

Mind you, Dhoni finished with 294 dismissals, which is fifth on the list. Despite his shortcomings (oh, how the commentators loved to criticise him!) he finished behind only Boucher, Gilchrist, Ian Healy and Rodney Marsh: all legends when it comes to wicketkeeping. He had 38 stumpings to his name — joint third on the list (after Bert Oldfield and Godfrey Evans; tied with Kirmani) Put a cut-off of 200 Test dismissals, and Dhoni’s 1.771 dismissals per innings is seventh on the list.

He may not have been the best, but he was not as poor as the experts make him out to be.

Remember that day a decade back when a man with an unkempt mane had strode out on the ground for the first time with an ominous-looking mace in his hand? Did you think he would lead India? Did we think that the abandon, the flourish will change over time, and Dhoni will end up being called Captain Cool?

The rowdy mop of hair is a thing of the past. Whatever hair peeked from underneath the India cap is now grey, as is the immaculately maintained two-day stubble. Dhoni must have been a tired man when he left the field today. The decision may already have been made.

Sourav Ganguly had once mentioned that there are few jobs as unenviable as the Indian cricket captain’s. He often used to point at his own greying hair to prove his point. Dhoni would agree. He had aged almost as fast as Ganguly. Fans and critics would argue on who the more successful of the two was. They will let them argue. 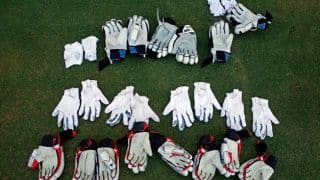