The tale of the dour Mudassar Nazar.

The dour Mudassar Nazar was, born on April 6, 1956. Abhishek Mukherjee looks back at the career of a grafter with the bat and an under-rated performer with the ball.

Mudassar Nazar is generally not considered among the great Pakistani openers. The fact is that he had finished as the highest run-scorer as a Pakistani opener — ahead of champions like Hanif Mohammad and Majid Khan. In fact, he had scored over a thousand runs more than Hanif, the next man on the list. Though Mudassar has been bettered by Saeed Anwar in later years, he still remains the second-best.

Additionally, Mudassar and Mohsin Khan have scored 2,057 runs for the first wicket, thus being the most prolific opening pair in the history of Pakistan — almost 500 runs clear of Aamer Sohail and Anwar. In fact, when the pair was broken, they were the seventh-highest in the history of the sport.

He was also a more than handy all-rounder in ODIs, and was the second Pakistani after Imran Khan to achieve the ODI ‘double’ of 2,000 runs and 100 wickets. In fact, he was the fifth cricketer in the world to reach the landmark.

However, it was the style of cricket that separated Mudassar from the others, more than anything. Bowlers ran in on the hard Pakistan turf, often in the most unforgiving of sun; as the energy sapped out of them with every passing over, Mudassar kept on meeting the ball with a dead bat. His patience and temperament were even more incredible given the fact that he was colour-blind — something that was detected as late as 1980. In his own words, “if a tall bowler bowled a yorker in front of a marginal sight-screen, I would lose sight of the ball and get bowled.”

As a bowler, Mudassar trundled to the wicket, almost coming to a halt as he reached the bowling crease. Had he played a decade or so later, he would possibly have been called a ‘dibbly-dobbly’ bowler. Even then, Mudassar turned out to be surprisingly effective on several occasions.

Mudassar made his Test debut at Adelaide in 1976-77, and was shelved for about a year after an indifferent start. His career had an awkward beginning: Sadiq Mohammad had to pull out because of an injury, and Imran popped up with “Mudassar is an opener, he can play.” Mushtaq Mohammad, the captain, immediately asked Mudassar to pad up, and after facing Saleem Altaf in the nets in the gloom, he was expected to turn up against Dennis Lillee and Jeff Thomson the next morning.

He opened with Majid, and asked his senior partner how he should encounter Lillee and Thomson. Majid responded “get ready to cut, hook, and pull”. Mudassar was used to playing neither of these strokes, got out cheaply in each innings, and was shelved once Sadiq was back.

He later went on to call this treatment ‘cruel’, and made it a point that it had never happened to his juniors as long as he was around.

He was recalled after a year — against England at Lahore. It was in his second Test that he made it to the record books — and is still there at the top of the list.

Pakistan lost a couple of wickets early before Haroon Rasheed joined Mudassar. Rasheed easily outscored Mudassar, and fell for 122 after a five-hour partnership. Mudassar had just begun, though. He grinded and grinded, and then grinded some more — and eventually went past Jackie McGlew’s record. McGlew had scored a hundred in 545 minutes a couple of decades back. Mudassar reached his landmark in 557 minutes — a record that is unlikely to be broken in the era of Twenty20s.

Pakistan, on their ascent in the world of cricket in the late 1970s, already had a steady opening pair in the destructive Majid and the elegant Sadiq — one of Mudassar’s favourite batsmen. However, both batsmen were past their primes, and Pakistan needed a stern, gritty man at the top of the order. It also helped that Mudassar could bowl.

He became a regular fixture in the England side, often fitting into the role of a batting all-rounder, which added to the balance of the side. He also contributed with the ball, especially in ODIs. He emerged as a crucial cog in the side in the World Series Cup of 1981-82, scoring 285 runs at 31.67 and picking up 12 wickets at 13.33.

Mudassar had a nightmare start to the England series in 1982. In the first Test at Edgbaston, he scored two second-ball ducks, falling leg-before to Ian Botham in each innings. He did not pick up a wicket, either, and Pakistan lost easily, despite Imran’s all-round heroics.

The selector kept faith on Mudassar, though. Mudassar scored a patient 20, and helped Mohsin put up a 53-run opening stand. Mohsin scored 200, which enabled Imran to declare the innings closed at 428 for 8. The bowlers then restricted England to 227, and Imran enforced the follow-on.

Imran shuffled his bowlers quickly, and brought on Mudassar — the fifth bowler as the innings — in as early as the tenth over of the innings, possibly to rest his frontline bowlers after they had bowled in the first innings. Mudassar, in his first burst, ran through Derek Randall’s defence, trapped Allan Lamb leg-before, and induced the edge of David Gower. It was only the second time that he had taken 3 wickets in an innings, and England were reeling at 9 for 3.

Mudassar was re-introduced after lunch, and he had Botham caught at backward point, thereby taking the first 4 wickets to fall. Almost immediately he had Mike Gatting caught behind, making it five out of five. Chris Tavare resisted, scoring the second-slowest fifty of all time, reaching the milestone in 352 minutes and 236 balls — something even Mudassar would have been proud of! He also became the first batsman ever to spend over a scoreless hour twice in the same international innings, taking a record 67 minutes to open his account, and spending an hour on 24.

Mudassar picked up Ian Greig as well, and finished with career-best figures of 19-7-32-6 — as Pakistan romped to an easy victory to level the series. England took the third Test at Headingley to win the series, but Mudassar kept his form intact, scoring 65, and picking up 4 for 55 in the fourth innings as England chased down 219 with three wickets in hand.

Mudassar had been doing fine, but that big series that usually defines a batsman’s career was yet to come. ‘That’ series came later in 1982 against the Indians. Mudassar had scored 126 in Bangalore three years earlier — his second hundred and highest score till date.

Pakistan won the six-Test series 3-0. Both Zaheer Abbas (650) and Javed Miandad (594) both made significant contributions with the bat, and Imran wrecked the Indians with 40 wickets at 13.95 and 247 runs at 61.75. However, Mudassar emerged as the top-scorer of the series from either side.

He scored a gritty 50 in the first Test at Lahore, but that was simply a trailer of what was to follow. He relinquished the opening slot to Mansoor Akhtar in the second Test at Karachi, and scored 119 off 199 balls — miraculous, given his scoring rate — before Imran ran through India with 8 for 60.

Back to opening, Mudassar scored 38 and picked up two crucial wickets at Faisalabad, which Pakistan won again. In the fourth Test at Hyderabad, Mudassar came out to open with Mohsin, and after the latter fell to Balwinder Sandhu, Rasheed departed first ball. That was when Miandad walked out to join Mudassar — with the team score at 60 for 2.

They eventually separated at 511 — equalling the existing world record between Don Bradman and Bill Ponsford. Mudassar eventually fell for 231, possibly out of boredom than anything else. Miandad remained unbeaten on 280, Imran declared the innings closed at a ridiculous 581 for 3, and then picked up eight wickets to bowl Pakistan to an innings victory to clinch the series.

Mudassar was not done, though: in the next Test at Lahore, he carried his bat through the innings, scoring 152 not out. Nazar Mohammad, Mudassar’s father, had carried his bat thirty years earlier against India at Lucknow. Thus, they became the first — and only till date — father-son pair to have carried their bats through completed innings.

There was still a Test left, and Mudassar responded with another 152 at Karachi. He finished the series with a staggering 761 runs at 126.83, scoring four hundreds. No Pakistani has even come close to Mudassar’s series aggregate, though Mohammad Yousuf has equalled his tally of four hundreds in a series against West Indies in 2006-07.

Mudassar had now become a permanent fixture in the Pakistan squad, forming a formidable opening pair with Mohsin, despite their utterly contrasting styles. In the 1984-85 Test at Faisalabad — once again against India — Mudassar created history once again, being the first batsman to score 199 in a Test innings as he was caught behind off an long-hop from Shivlal Yadav, causing even Sunil Gavaskar to shake his head in disapproval.

A few Tests later, New Zealand thrashed Pakistan by an innings at Auckland. Mudassar, however, batted through the second innings, almost carrying his bat for the second time in his career. He was bowled for 89 — the last batsman to be dismissed in a score of 183.

Later that season he ran through a formidable West Indies in an ODI at Melbourne, removing Viv Richards, Clive Lloyd, and Gus Logie, and finishing with 5 for 28 — a match that Pakistan won easily. However, with the advent of batsmen like Rameez Raja and Saleem Malik, Mudassar’s appearances started to become infrequent.

He still kept on contributing, his most significant performance coming in the ODI against Sharjah in 1986-87, where he picked up 3 for 44 and scored 74 to lead Pakistan to victory. With Imran’s career coming to an end, Mudassar’s presence still added balance to the side.

Later that year, he still had a run of 124, 73, and 120 in consecutive Tests — all against England – spanning over two series at Edgbaston, The Oval, and Lahore. That was his last hurrah. Though Imran insisted on him in the historic West Indies tour next year, his career faded out after that.

Mudassar eventually finished with 4,114 Test runs at 38.09. He had scored ten hundreds, six of them against India; his five highest scores had all come against India. Additionally, he had picked up 66 Test wickets at 38.36. In ODIs his numbers read 2,653 runs at 25.26 and 111 wickets at 30.91, making him a utility cricketer more than anything else. 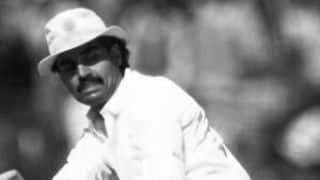