This is the 4th time Mumbai Indians (MI) have reached the final in the history of Indian Premier League (IPL).

4th time Mumbai Indians (MI) have reached the final in the history of Indian Premier League (IPL). This is the 2nd-most by a single team after Chennai Super Kings (CSK), who have reached the final in 6 editions. One must remember that CSK have played only 8 editions of the tournament and MI 10. FULL CRICKET SCORECARD: Mumbai Indians (MI) vs Kolkata Knight Riders (KKR), IPL 10, Qualifier 2

33 balls remaining MI clinched victory over KKR in Qualifier 2, the biggest margin in terms of balls remaining in an IPL playoff. The previous best was 31 balls by CSK against Kings XI Punjab (KXIP); CSK won the match by 9 wickets in the second semi-final of IPL 2008 at Wankhede Stadium, Mumbai.

4 for 16 bowling figures of Karn Sharma in this match, joint-best by a spinner in an IPL playoff. Anil Kumble took 4 for 16 for Royal Challengers Bangalore (RCB) against DC in the final of IPL 2009. Overall, this was the joint 3rd-best bowling figures by a bowler in a playoff, after Doug Bollinger (4 for 13 for CSK against MI in 2010) and Dhawal Kulkarni (4 for 14 for Gujarat Lions [GL] against RCB in 2016).

Abhishek Kumar is an aspiring cricket statistician and reporter with CricketCountry. He can be followed at @abhik2593.
First Published on May 20, 2017 10:02 AM IST
Last updated on May 20, 2017 10:02 AM IST
TOPICS:
IPL IPL 10 IPL 2017 KKR vs MI Kolkata Knight Riders MI vs KKR Mumbai Indians
SERIES:
Indian Premier League, 2017 Match : Mumbai Indians vs Kolkata Knight Riders 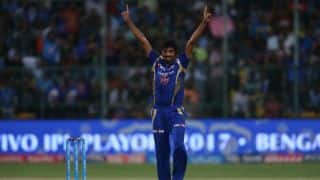 IPL 2017 Playoffs: To contribute in such manner for Mumbai Indians (MI) in Qualifier 2 is a great feeling, says Jasprit Bumrah