Chasing 231 to win against Kings XI Punjab, Mumbai Indians nearly created history as they took the fight right into the final over of the contest.

In a high-scoring clash of Indian Premier League (IPL) 2017, Kings XI Punjab (KXIP) emerged winner by a narrow margin of 7 runs over Mumbai Indians (MI), at Wankhede Stadium on Thursday night. Chasing 231 to win, Mumbai Indians nearly created history as they took the fight right into the final over of the contest. Kieron Pollard made a splendid 24-ball 50 not out, but his valiant efforts went in vain as he could not score 9 runs in the last over. With this win, Kings XI Punjab remained in contention of qualifying for the IPL 10 playoffs, with one more game left against Rising Pune Supergiant (RPS) on Sunday, May 14. Let us take a look at the highlights of this contest. FULL CRICKET SCORECARD: Mumbai Indians (MI) vs Kings XI Punjab (KXIP), IPL 2017 Match 51

Wriddhiman Saha, you beauty: Saha was sent up in the batting order to launch an attack and he did exactly that. Saha revealed post Kings XI Punjab s win that the plan was to go hard at the Mumbai Indians bowlers, and he played his role splendidly. Saha scored 93 not out off just 55 balls, studded with 11 fours and 3 sixes. He was belligerent as well as smart against Mumbai Indians bowlers, collecting runs without any qualms as such.

Saha was brilliant in the field as well. He took a low, diving catch to his right on a ball that was travelling very fast off Hardik Pandya s bat. Saha was rightly adjudged the Man of the Match.

All-round show from Martin Guptill: The tone was set early for a big total for Kings XI Punjab by Guptill and Saha, as the two batsmen lived by the edge. Guptill and Saha added 68 runs for the opening wicket. Guptill, who has had a mixed run so far in the ongoing IPL 10, came out all guns blazing and smacked an 18-ball 36 with the help of 5 fours and 1 six. This is not all, as Guptill took a one-handed blinder to get rid of Lendl Simmons, timing his jump perfectly and grabbing the ball that looked set to clear the ropes.

Glenn Maxwell s onslaught: Even though their partnership for the second wicket was of 63 runs, it set the platform for a huge total for Kings XI Punjab. Maxwell played the most aggressive knock from either sides in the contest, smacking 5 sixes and 2 fours to score 47 off a mere 21 balls. Maxwell was belligerent, hitting the ball with a lot of power as well as skills to help KXIP cross the 100-run mark in no time.

Lendl Simmons show: The West Indian batsman was at his best once again, stroking his way to a fabulous 59. Simmons added as many as 99 runs with Parthiv the highest stand for both side and powered Mumbai Indians to a rollicking start. Simmons clobbered 4 sixes and 5 boundaries to score 59 off a mere 32 balls.

Rohit Sharma exposed again: To see Rohit succumbing to a leg-spinner once again was not a surprise, but his failures do expose the batsman s shortcoming. Rohit contributed with a mere 5 off 7 balls, and fell after mistiming a stroke off Rahul Tewatia to be caught at long-on. Rohit s dismissal came at a very wrong time for Mumbai Indians, who also lost Nitish Rana right after.

Ishant Sharma a baby giraffe : Ishant reminded former Australian cricketer Matthew Hayden, who was in the commentary box, of a baby giraffe during the clash. In his wicketless spell of 4 overs, Ishant tumbled as many as three times, which prompted Hayden to make that remark. While it did look a tad entertaining, Ishant fumbled on a run-out chance to get rid of Rana.

Kieron Pollard shows resilience but : The burly all-rounder was determined to take Mumbai Indians past the finish line. He hammered 5 sixes and a four to make 50 not out off 24 balls, but eventually could not pull off a win for his team. In the final over, with Mumbai Indians needing 16 to win, Pollard decided to take strike on all balls. On the second ball, Pollard deliberately took a short run to ensure he takes strike on the next ball. While it did look smart from the batsman s perspective, but also turned out to be a debatable topic with a few calling Pollard s act as questionable. 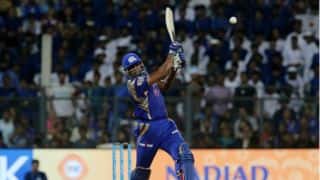 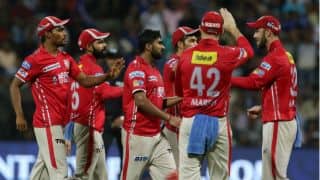