Rohit Sharma, who was coming off from 98 not out in the last match, was out on first-ball duck to Sandeep Sharma.

Kings XI Punjab (KXIP) survived a scare in form of Harbhajan Singh and Jagadeesha Suchith and registered their first win in Indian Premier League (IPL) 2015 Match 7 at Mumbai. Devarchit Varma brings the highlights of the match.

Virender Sehwag and Murali Vijay’s blitz: The right-hander Sehwag as seen shadow-practising as a left-hander when he came at the crease, which was surprising. However, the man who got out last match on first-ball duck was in his usual elements, cutting and smashing the ball at will. The senior batsman had a special liking for Indian domestic circuit hero R Vinay Kumar, hitting the bowler for two fours and a six in the third over to set the tone. Sehwag fell after reaching a brisk 19-ball 36, studded with six boundaries and a six. READ: KXIP overcome spirited Mumbai Indians to win by 18 runs in IPL 2015

On the other hand, Vijay continued to revel as he too scored crucial runs at the top. Vijay is looking in terrific touch for the Kings XI Punjab (KXIP) this season, as he continued to smash the ball from the middle of the bat on most of the occasions. Vijay finished with a run less than Sehwag, facing 29 balls and hitting six boundaries. Full Scorecard: Mumbai Indians (MI) vs Kings XI Punjab (KXIP) IPL 2015 Match 7 at Mumbai

George Bailey’s half-century: The KXIP captain came at a time when his side was stumbling after getting a strong start. Bailey came out to bat at No. 5, and finished with the score of 61 not out from only 32 balls, slamming four boundaries and three sixes. The batting prowess of the right-hander was once again on display as Bailey batted at a strike rate of splendid 190.62, taking Kings XI Punjab to a position of command against the Mumbai Indians. IPL 2015 Team Previews

Mumbai Indians’ top-order collapse: Rohit Sharma, who was coming off from 98 not out in the last match, was out on first-ball duck to Sandeep Sharma and his dismissal opened the floodgates for Mumbai Indians. Anureet Singh jolted Mumbai once again in the fourth over, when Aditya Tare was dismissed for seven. Mitchell Johnson was into the attack by then, and he got one nipping back into Aaron Finch, knocking off the off-stump. The middle-order failed to resist the KXIP bowlers, and Ambati Rayudu, Corey Anderson and Kieron Pollard fell without troubling the scorers much. IPL 2015: CSK, KKR, RCB, KXIP, MI, RR, SRH, DD full team details in IPL 8

‘Sachin… Sachin’ reverberates at Wankhede Stadium: These two words ‘Sachin’ and ‘reverberates’ are very close to the stadium’s history and the venue once again produced deafening cheer for Sachin Tendulkar, who was sitting in the Mumbai Indians’ dugout. The cricket fans present in the stadium went on cheering ‘Sachin… Sachin’ for a very long time, and when the legend finally came on the big screen, the decibel levels went up a little more high. Tendulkar was certainly overwhelmed, and he waved to the fans. Kings XI Punjab in IPL 2015 Preview: IPL 7 runners-up will look to continue good form in IPL 8

Harbhajan Singh comes to the party: When Harbhajan walked out to bat, there was not much left in the game for Mumbai Indians. The right-hander, who has two Test centuries to his credit, raised Mumbai’s hopes of a turnaround when he slammed a couple of big hits. Rishi Dhawan was hit for three boundaries in the 15th over. He was also caught in the same over but Dhawan had over-stepped. The crowd went berserk when Mitchell Johnson was hit for a six and in the 17th over, Anureet Singh for three consecutive sixes — all pure cricketing strokes into the stands. Harbhajan set the record when he raced to 53 off just 19 balls, swatting four boundaries and five sixes to register the fastest half-century for Mumbai Indians in the IPL history.

Jagadeesha Suchith joins the fun: The left-handed batsman played some of the orthodox cricket strokes, and provided brilliant support to Harbhajan, who was on a rampage. Akshar Patel was called for the penultimate over, and Suchith slammed two boundaries and a massive six to bring Mumbai even closer to the target.

Harbhajan and Suchith put up century stand: The two Mumbai batsmen were splendid on Sunday night, almost turning the game on its head as they added 100 runs for the sixth wicket in only 39 balls. The Mumbai fans would be wondering what these two would have done had they come together at the crease earlier in the innings! 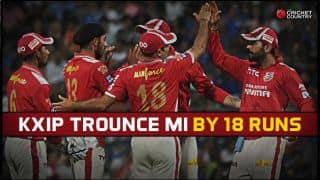