Mumbai and Chennai are statistically the most successful teams in the IPL.

History is rather one-sided…

Mumbai Indians (MI) skipper Sachin Tendulkar won the toss and chose to field against MS Dhoni‘s Chennai Super Kings (CSK) in the inaugural IPL. Vidyut Sivaramakrishnan and Stephen Fleming opened the batting for Chennai Super Kings. After a bright start, Shaun Pollock dismissed Vidyut for 16. Pollock bowled a master spell of fours overs, and ended with one for nine. Fleming scored as fast as he can to muster 26 off 29 deliveries. Suresh Raina (1) suffered a rare failure and Chamara Kapugedara was out for a duck. It was a time when Subramaniam Badrinath not only scored runs, but also quickly. He struck a 33-ball 53 with seven fours and two sixes. Dhoni scored a slower 35-ball 43 not out as Chennai posted a competitive 156 for six in their 20 overs. Dhawal Kulkarni took three wickets and Dwayne Bravo, yes he played for Mumbai Indians against Chennai, took two wickets.

Chennai’s chances were gazumped by Sanath Jayasuriya‘s magic. The left-handed opener hammered a staggering nine fours and 11 sixes in his innings. He scored an unbeaten 114 off only 48 deliveries. Opening partner Tendulkar scored a tame 12 and Robin Uthappa scored an unbeaten 16. Nothing much was needed from the others as Jayasuriya scored more than a mind-boggling 72 per cent of Mumbai’s runs. Mumbai waltzed to a nine-wicket win in only 13.5 overs. Jayasuriya’s innings is arguably one of the greatest in IPL history.

The IPL went to South Africa in 2009, so, there was no possibility of a match at Wankhede Stadium. In 2010, the league match was held at the Brabourne Stadium and the final between the teams was played at the DY Patil Stadium. But in the 2011 season, the Wankhede Stadium hosted again. Dhoni won the toss and sent Mumbai into bat. Albie Morkel and Doug Bollinger dismissed openers Rajagopal Sathish (0) and Tendulkar (5) early. But a 61-run stand between Ambati Rayudu and Rohit Sharma sent Mumbai on the right track. After Rayudu’s wicket, it was Kieron Pollard along with Rohit who tore into the Chennai bowling. The duo shared an 87-run partnership for the fourth wicket. Rohit was out for 87 off 48 deliveries with eight fours and five sixes. Mumbai scored 164 for four in their 20 overs.

The run-chase started well for Chennai as Michael Hussey and Murali Vijay gave them scored 31 runs for the opening wicket. But Vijay’s wicket was followed by Raina’s quickly. Badrinath, yet again, came alive against Mumbai at Wankhede Stadium. He top-scored with 71 runs off 48 deliveries hitting seven fours and two sixes. Hussey scored 41 runs. But the rest were dismissed for single-digit scores. Harbhajan Singh was the wrecker-in-chief as he took five wickets for 18 runs. Chennai could only score 156 for nine in their 20 overs.

Harbhajan won the toss and elected to field. Vijay (41), Raina (36), Dwayne Bravo (40) and Dhoni (20) helped Chennai score a challenging total of 173 for eight in their 20 overs. RP Singh and Lasith Malinga took three wickets each. Mumbai needed the win to keep their play-off hopes alive. James Franklin (1) was out early, but Tendulkar and Rohit struck a 133-run partnership for the second wicket. Tendulkar made all the fans at the Wankhede Stadium stand and applaud his genius as he scored a fluent 44-ball 74. He only hit one six, but 11 fours came off his bat. Rohit scored a quick 60 with six fours and two sixes.

But it didn’t seem enough as Mumbai needed 16 runs off the last over. Ben Hilfenhaus bowled the last six deliveries of the match. The equation came down to 14 runs off three deliveries. Dwayne Smith was on strike and the fourth delivery hit for a flat six over long-on. The fifth delivery was a full-toss and Smith clubbed the ball to long-on for a four. Now four runs were needed for a victory with one delivery remaining. Smith hammered a length delivery down the ground for a four.

The most recent match at Wankhede Stadium was in the 2013 season. Mumbai captain Rohit won the toss and elected to bat. Unlike, the previous clashes, this was a low-scoring match. Smith (22) and Tendulkar (15) could not score at even a run-a-ball while opening. Dinesh Karthik scored 23 off 23 deliveries. Pollard was out for one run. But Rohit scored an unbeaten 39 off 30 deliveries with three fours and one six. Harbhajan struck a quick-fire 11-ball 25 with two fours and two sixes. This guided Mumbai to 139 for five.

Chennai’s batsmen could not get to grips with Mumbai’s bowling. Mitchell Johnson bowled quick and bounced most of Chennai’s batsmen. He took three wickets. Malinga was at his best as he took two wickets for six runs. Pragyan Ojha got three wickets, while Harbhajan and Pawan Suyal took one wicket each. Hussey (22), Ravindra Jadeja (20) and Dhoni (10) were the only Chennai batsmen to get into double figures. Chennai were bowled out for 79 in 15.2 overs.

Now back in 2014, for Mumbai to keep their hopes of qualifying for the play-offs going, history must be repeated. Whatever the outcome, the Wankhede Stadium will see a great clash between the two most successful teams in IPL history. 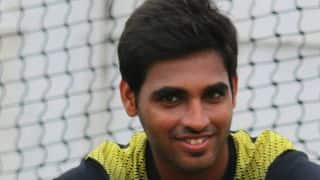