1. Super start by Slinga: Lasith Malinga started the match by getting Mayank Agarwal to edge behind to Parthiv Patel off the very first delivery. He took a bit of a pasting from Yuvraj Singh after that, but eventually had the last laugh when dismissed Yuvraj. IPL 2015 Highest run-scorer: List of best batsmen in IPL 8

2. Brilliant Bhajji stifles DD: Harbhajan Singh bowled a total of 24 balls on the day. He conceded one two, one three and one leg bye, apart from six singles. The remaining 15 deliveries yielded no runs and two wickets. Harbhajan finished with mind-numbing figures of two for 11 in four overs with one maiden. IPL 2015 Highest wicket-taker: List of best bowlers in IPL 8

3. Yuvraj Singh returns: Yuvraj Singh started cautiously after DD were reduced to 50 for three in the seventh over. At one stage, he was languishing on 25 off 32 deliveries before hitting four boundaries in a row; one off Hardik Pandya and three off Malinga. He then hit two consecutive sixes off Mitchell McClenaghan, the second of which brought up his fifty. He ended up scoring 57 off 44 balls with seven boundaries and two sixes. IPL 2015 Most 6s and 4s: List of most dangerous batsmen in IPL 8

4. Lendl Simmons defies gravity: Lendl Simmons took the catch of the match to dismiss Yuvraj. Batting on 57, Yuvraj scooped a wide ball from Malinga to point. Simmons jumped to his right, and plucked a terrific one-handed catch above his head to send Yuvraj packing. It was a feat of tremendous athleticism, and cost DD a potential 10-12 runs.  IPL 2015 Leading fielders: List of Best fielders in IPL 8

5. The Zak attack: Zaheer Khan ensured that Malinga’s first-ball wicket would not be the only such dismissal of the day. MI were pegged back when their star batsman Lendl Simmons was struck in front of the stumps off the first legitimate ball of the innings. IPL 2015 schedule: IPL 8 match time table with venue details

6. Ambati Rayudu guides MI home: Ambati Rayudu came in to bat at No. 6 below Hardik Pandya and Harbhajan Singh. He ended up remaining unbeaten on 49 off 40 balls with four fours and a six. He rescued MI along with Rohit Sharma to take MI from 40 for four to 100 for five before putting on an unbeaten 53 with Kieron Pollard.  Indian Premier League (IPL) 2015: Complete coverage 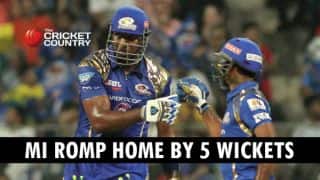 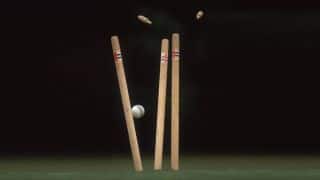