Munaf Patel was one of the many success stories to emerge from rural India in the last one decade.

Munaf Patel was one of the many success stories to emerge from rural India in the last one decade. With an impressive Test debut and his focus on line and length, Munaf was on his way to fulfil India’s dream of finding a genuine pace bowler. Injuries and fitness issues has kept him away from the Indian team, while a new generation of pacers have come through the ranks. Munaf has not yet given up. Having worked upon his fitness, the pacer claims he is bowling as good as he used to at the start of his career. He is a vital cog in the Baroda team and is busy helping his side clinch victories with no Indian Premier League commitments ahead. The member of the 2011 World Cup winning squad speaks to Abhijit Banare on the sidelines of the Syed Mushtaq Ali Trophy in Mumbai.

Cricketcountry (CC): How do you look back at the domestic season which is nearing its end with this Twenty20 (T20) series?

Munaf Patel (MP): I am happy with how the overall season went for me. I had focused hard on my fitness. My rhythm has been good. And it is because of my fitness I have managed to perform consistently across formats, in Ranji [Trophy], then the domestic one day and in T20. When you’re physically in good shape, my bowling was in good touch.

CC: Fitness, injuries are something for which you were criticised for a long time, how do you respond to that?

MP: The last ODI [One-Day International] I played in Cardiff in September 2011, I had hurt myself on the field. And from thereon I haven’t made a return. Injuries aren’t something you can control. No fast bowler gets injured deliberately. I have always been committed to the game and have worked upon my fitness.

CC: Whom do you credit the improvement in fitness to?

MP: The advantage this season was that Baroda Cricket Association [BCA] has appointed Matthew Dwyer for two years to look after the team’s fitness and improve the team’s standards in the field. He was there with Mumbai Indians [MI] earlier. Dwyer and our physio, Mahesh have spent a lot of time with me and made a noticeable change in my fitness standards. And it’s reflecting in my performance as well.

CC: And about the improvement in fielding…

MP: Jonty Rhodes and Gary Kirsten. The stint with the Indian team under Kirsten brought a lot of improvement in me. It was all about being mentally strong to bring the change in myself and once I believed, things fell in place.

CC: There is a lot of assistance from mental conditioning coaches in improving a player. Now, has that helped you anytime?

MP: I don’t believe much in those. I have been more focused into my bowling. When not in form, I go back to bowling in the nets and work hard there. It doesn’t work for me, but probably batsmen do get help by the presence of such mental conditioning coaches.

CC: You have focused on accuracy a lot. How does your bowling differ from T20s to the long format?

MP: I mainly look at situation and the batsman facing. In long format you look at pitching consistently. But in T20s, it depends on situation. But in the death overs I aim fuller. Overall, Varying your length is important in the T20s, but I don’t use short balls much.

CC: Eric Simmons, India’s former bowling coach rated you highly back then. How has Simmons helped you in growing as a fast bowler?

MP: I value the experience working with him back then a lot. He played a major role in improving my basics than anything else. If your basics are in place, then you can do anything, so is the case with a fast bowler. So, Simmons helped out a lot.

CC: What are the other experiences which shaped you as a fast bowler?

MP: I am indebted to the stint with the MRF Pace Academy. I was a raw fast bowler with little understanding about how to go about my training. Dennis Lillee and TA Sekar had worked a lot on my growth as a fast bowler. And then came the contribution of Simmons. Once I was doing well, I got to work with Shaun Pollock, while playing for Mumbai Indians. With such experienced coaches and players, I did well.

CC: One of the criticisms with Indian pacers is that, they start well but cut down on pace later and you have been one among them as well. Why?

MP: I feel there are not many pacers who have cut down on pace. Umesh Yadav has been around since a long time and he has maintained it. Varun Aaron too has been bowling with the same pace. Irfan Pathan cut down because of injuries. I think fear of injury has been one of the main reasons bowlers cut down on pace. Form me, the focus on line and length led to cutting down on my pace. Ultimately, reducing the pace is the bowler’s own decision and if he feels he can do well by reducing pace, it’s alright.

CC: Fast bowlers and sledging go hand in hand. Even you have had your own share of sledging at batsmen. What do you think of it?

MP: I feel sledging is alright. I have sledged many times though, never crossed a certain limit. It does work a lot in unsettling the concentration of the batsman. But in international level, most of the batsmen are mentally strong and don’t get caught into it easily. I honestly don’t remember any past incident in my international career when a batsman has fallen for sledging. But in domestic it mostly works.

CC: You weren’t picked during this year’s IPL auction. What was your first reaction on it?

MP: I thought a lot over it. It did come as a shock. Initially, I thought they rejected me due to my fitness. It started playing on my mind, because I felt I was among the top 10 Indian bowlers in the IPL. But I have moved on. I am focusing on maintaining my fitness, and with Baroda in the knockouts, I can help the team do well here and then take a break.

CC: Many players look forward to the IPL to make a comeback. But right now, without an IPL contract, what are your plans on making an India comeback?

MP: Many of those things are not in my hand. It’s completely on the selectors now. My only chance is to come back again next season and perform well in the domestic matches. It’s not necessary to have an IPL contract and then only you manage to find a place in Indian team. My job is to give my 100 per cent and bowl consistently. 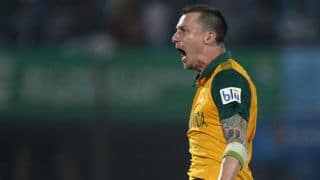