Mustafizur Rahman is a Bangladeshi cricketer who is a left-arm pacer and famous for his off-cutters.

Born September 6, September 1995, Mustafizur Rahman is a Bangladeshi cricketer who is a left-arm pacer and famous for his off-cutters. He grew up in small town of Sathkira in Khulna Division of Bangladesh. His father Abul Qaseem Gazi is a cricket enthusiast who used to wake young Mustafizur up to watch matches. On his birthday, Abhishek Kumar digs out 13 interesting facts from his life.

1. Started as a batsman: During his early teenage years, Mustafizur used to be a batsman in tennis ball cricket and played football too in his schoolyard. He was not like those batsmen who could hit or bat long.

2. First spot: Mustafizur’s elder brother Mokhlesur Rahman used to register a team in local cricket tournament in order to win the Television set. Mustafizur along with his brother used to hire players to play in the tournament. It was there that he was first spotted as a bowler when Mustafizur played in that tournament and a batsman called Millon told his brother that he bowls well and will call him for age-group cricket in Sathkira.

3. Bowls from left-hand but couldn’t eat with it: Mustafizur revealed this interesting story in an interview with ESPNCricinfo by saying, “I was always a left-hander, for everything. My mother took me to a place in the village. After returning from there I couldn’t eat left-handed but everything else was left-handed.”

4. Doesn’t like sledging: Yes, this young Bangladeshi bowler does not like sledging despite being advised by someone to do so because he is a pace bowler but Mustafizur likes to keep his focus only on his bowling. “I don’t sledge. I don’t like this thing. Some people tell me that a pace bowler has to do it, but I think the batsmen will do their job, I will do mine,” said Mustafizur to ESPNCricinfo.

5. Under-19: After impressing in Under-17 tournament in his hometown, Mustafizur came to Dhaka for a trial and soon he got enrolled in Bangladesh Cricket Board’s (BCB) pace foundation. He was called on to bowl in the Bangladesh U-19 nets and became the regular member of U-19 side.

6. Brother: His elder brother Mokhlesur played a crucial role in his career. He was the one who supported him very much and used to ferry him on his bike everyday to the training centre which was 40 km away from his house.

7. How he started bowling off-cutter: When Mustafizur used to bowl in the nets in U-19s, Anamul Haque, who was once batting against him, asked him, “Can’t you bowl the slower one?” That was the moment which he credits as the reason behind him becoming a star Bangladeshi bowler. He took it as a challenge and tried on his own and then came up with his famous off-cutter. He can bowl two types of cutters, one at a speed around 130 kph and other around 120 kph.

8. His idol: Mustafizur idolises Pakistani pacer Mohammad Aamer who was once considered to next Wasim Akram of Pakistan team. Aamer’s involvement in spot-fixing scandal never bothered Mustafizur, who once said, “I just follow the bowling of Mohammad Amir. His spot-fixing allegations don’t bother me.”

9. Man of records: Mustafizur impressed with his form on his international debut against Pakistan in a T20I by taking the wicket of Shahid Afridi and Mohammad Hafeez. Later in the year, he made his One-Day International (ODI) and Test debut and in both his debut matches, he was awarded with Man of the Match (MOM) awards for his performance. He became the first ever cricketer to receive MOM award on his both Test and ODI debut.

10. Fined for collision with MS Dhoni: During the first ODI between Bangladesh and India in 2015, the incident of collision between Dhoni and Mustafizur occurred. It happened during the the 25th over of India’s batting when Dhoni was going for a single after playing the ball to mid-off and Mustafizur came in his way. The cool and calm headed Dhoni was probably in quite angry mood as he moved Mustafizur from his path with his forearm. This was not the first time this type of incident happened with Mustafizur. Before that, he was involved in the similar incident with Rohit Sharma. Later, Dhoni was fined 75% while Mustafizur was fined 50% of his match fee.

11. IPL and other T20 leagues: So far, Mustafizur has made his presence in three T20 leagues and these are Bangladesh Premier League (BPL) for Dhaka Dynamites (DD), Indian Premier League (IPL) for Sunrisers Hyderabad (SRH) and NatWest T20 Blast for Sussex. Also, he was awarded with Emerging Player award in his debut IPL season in 2016.

12. His translator in IPL: Because of not knowing English at all, Mustafizur always had issues communicating with others in his franchise teams. He was thus helped a lot by his SRH teammate Ricky Bhui, who acted as a translator during IPL 2016. 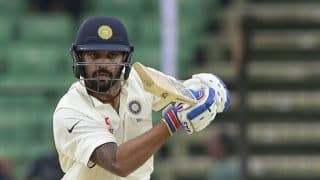