Najam Sethi: No ruling out a short ODI series later this year in Lahore

Najam Sethi: No ruling out a short ODI series later this year in Lahore

Najam Sethi speaks on a variety of subjects, including head coach.

Najam Sethi is the editor-in-chief of The Friday Times and has previously been the editor of Daily Times and Daily Aajkal newspapers. He has a Master’s degree in Economics from Cambridge University and also hosts a popular current-affairs program on Geo TV and is therefore, no stranger to politics or the stresses associated with the rigours of a public life.

In recent times, the name of the 66-year old award winning Pakistani journalist, editor, and media personality has been the subject of even more attention due to his appointment as acting Chairman of the Pakistan Cricket Board (PCB) where he has displaced PCB’s previous chairman Zaka Ashraf.

In an exclusive interview with PakPassion.net, the acting chairman spoke on a variety of subjects including the criticism associated with the recent appointment of Waqar Younis as Head Coach, plans for the series with India, Pakistan’s stance vis-a-vis ‘Big 3’, plans for holding the Pakistan Super League (PSL) and the international perception of instability in the leadership of the PCB.

PakPassion.net (PPN): The PCB selection committee recommended Waqar Younis as coach. What swayed you to select Waqar and what will he bring to the fore?

Najam Sethi (NS): Waqar is universally recognised as a solid professional. His expertise and leadership qualities have been honed considerably in the last few years at home and abroad and this is acknowledged even by those of his critics who accuse him of being “tainted” in some sense or, hold a grudge against him for one reason or another.

Everyone says that if he can show a degree of maturity in handling the players then he is the best man for the job. I think he has matured and will do a good job.

PPN: Your thoughts on Mohsin Khan’s comments about Waqar being tainted and that the choice of Waqar is unfair and biased?

NS: Honestly, Mohsin is being both unfair and unkind. Mohsin was selected by the Pakistan Cricket Board some years ago to be the Head Coach without anyone else ever being interviewed. As Head Coach he worked with Waqar as the Bowling Coach and Mushtaq [Ahmed] as the Spin Coach.

What happened to his concerns about “tainted” and “transparency” then? Mohsin applied for the position of Head Coach on three earlier occasions and was rejected. Why didn’t he protest then? I think he is simply unhappy because he thought he would get a high ranking job in the PCB through some connections or the other and when he didn’t, he couldn’t control his anger.

PPN: There has been some criticism against you for announcing that Waqar would be head coach several days before the deadline. What do you have to say to that?

NS: The Committee realised early that unless some really outstanding candidate from foreign shores applied for the job, Waqar was by far the best Pakistani in contention. And since most of the applications had arrived in the first week and no one else was in serious contention, it was a foregone conclusion for the Committee and the members apprised me of their views.

In any case, even if I had announced Waqar without the benefit of a committee to guide me, I would have been within my rights as many previous chairmen who consulted experts informally and announced their choice.

PPN: Will Waqar Younis have input into the selections of the other coaches which have been advertised?

NS: Yes, he should because he has to get the best out of them.

PPN: It’s reported that Waqar wanted more say in selection matters than Dav Whatmore had. Can you confirm that this has been agreed upon with Waqar?

NS: The Head Coach should have a say in all matters relating to training, selection, tactics and strategy. In the current case, he will work closely with Moin Khan [Chief Selector and Manager] and the Captain.

PPN: Can you clarify the position of chief selector following the recent decision by the Islamabad High Court (IHC) regarding Mohammad Ilyas. Who actually is the chief selector and what are your thoughts on the IHC’s decision?

NS: There is a misperception that the Islamabad High Court has restored Ilyas as Chief Selector. It hasn’t. It has simply set a date to hear the arguments from both sides.

PPN: Have matters been cleared with Moin Khan regarding the choice of captain for the World Cup?

NS: There never was any issue. The media made a mountain out of an anthill.

PPN: Some suggest that Moin and Waqar Younis will find it difficult to work together, your thoughts on those concerns?

NS: Not at all. Moin was head of the committee that selected Waqar.

PPN: Is there any timescale planned regarding the naming of a T20I captain to replace Mohammad Hafeez?

PPN: Any updates on the Pakistan Super League and what are the plans for this league other than it will be in UAE?

NS: Hopefully, it will take place in Jan 2015 in the UAE [United Arab Emirates].

PPN: What can the PCB learn from the successful stint of IPL in the UAE?

NS: Only that what matters is the team following at home. It’s eyeballs that matter in financial terms, not stadiums. So broadcasting is the name of the game, not gate receipts.

PPN: Do you think the Pakistan Super League (PSL) can attract the top players from around the world?

NS: Yes, provided they are paid market rates and the PSL is held in the UAE.

PPN: Any updates on the India versus Pakistan series in UAE or another neutral venue, given that Indian players have now participated in a tournament in UAE?

NS: There is an understanding between the PCB and the BCCI [Board of Control for Cricket in India] that India and Pakistan will start playing each other from next year in the UAE, India or “any mutually acceptable place”.

PPN: Pakistani international cricketers have been given a pay hike. Are there any plans to improve the pay of Pakistani players in domestic cricket?

NS: The pay of all players should increase after we revamp regional cricket and get elected regions to find rich sponsors for their teams playing regional competitions.

PPN: The constant change of leadership at the PCB would be a cause of concern for your member-partners at the ICC, how do you intend to allay their fears in this respect?

NS: The ICC has now learnt to live with instability in Pakistan. Indeed, they are now having to cope with uncertainty in the BCCI too. But this instability is a real cause for concern at home. The constant intervention of the courts in both day to day and strategic matters in the PCB is creating a logjam and derailing many urgently needed projects.

PPN: Is there a timeframe in your mind for Pakistan’s ability to hold an international series in Pakistan?

NS: No. It all depends on how quickly the government is able to erode the terrorist threat. But we don’t rule out a short ODI series in Lahore with an international team later this year.

PPN: In a recent interview, Ehsan Mani suggested that the PCB had “options” in hand to deal with the Big 3 proposals. What options, in your view, did Pakistan have to resist such a change and why were they not taken?

NS: Mani was speaking at a time when four out of 10 members were still undecided. But after Bangladesh, South Africa and Sri Lanka joined the Big 3 group one by one, Pakistan’s options were radically reduced. We have now agreed to support the revised proposals on the condition that India agrees to play Pakistan at “home” (UAE or any other mutually acceptable venue) and we have an understanding that the two will play six series over 2015-2023. Kevin Pietersen, Dinesh Karthik on the attack for Delhi Daredevils against Kings XI Punjab in IPL 2014 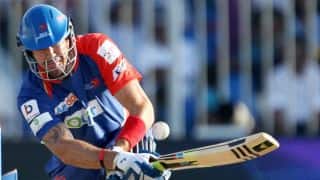