On October 11, 1996, Nayan Mongia, playing his 13th Test match and the first as an opener, scored 152 against Australia in the inaugural Border-Gavaskar match at the Feroz Shah Kotla, Delhi. The effort proved decisive as India mauled the Aussies by seven wickets, writes Sarang Bhalerao. 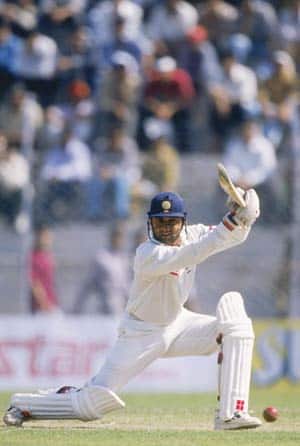 On October 11, 1996, Nayan Mongia, playing his 13th Test match and the first as an opener, scored 152 against Australia in the inaugural Border-Gavaskar match at the Feroz Shah Kotla, Delhi. The effort proved decisive as India mauled the Aussies by seven wickets, writes Sarang Bhalerao.
This was the inaugural Test of the Border-Gavaskar Trophy played at the Feroz Shah Kotla in 1996. The Kotla track looked underprepared and certainly it was a tailor-made track for the triumvirate of Indian spin bowlers: Anil Kumble, Aashish Kapoor and Sunil Joshi. Australia were without the services of Shane Warne. The question remains till date, what if Warne was fit for the Test? Would such a scuffled up wicket be presented for the visitors? Australia, however, fielded debutant left-arm spinner Brad Hogg and leg-spinner Peter McIntyre.

Australian skipper Mark Taylor won the toss and decided to bat first. Australian innings just never showed enough resistance while batting. The nature of the wicket had already unsettled them. Michael Slater top-scored with 44. The middle-order had no clue how to face the turning ball. The result: Australia were bundled out for 182 on the opening day with spinners picking up eight wickets. Wisden Almanack says, “Taylor chose to bat on what could have been mistaken for a third-day strip, but suspicions about the pitch seemed to dominate Australian thinking, and his team’s inability to concentrate irritated Taylor beyond measure. He had built his pre-match strategy around the need for occupation of the crease.”

India’s makeshift opener Nayan Mongia, playing his 13th Test match, dropped the anchor and accumulated the runs. Mongia was calm and composed, unruffled while facing Glenn McGrath, Paul Reiffel and the spinning duo of Hogg and McIntyre. Mongia looked in his zone, exhibiting a water-tight defence and playing shots all along the ground. He stitched a partnership of 131 runs for the second wicket with Sourav Ganguly, who scored 66. Sachin Tendulkar, who was captaining India for the first time, was dismissed for 10 caught by Mark Waugh at the first slip off McIntyre. Mohammad Azharuddin was out for 17 bowled by McGrath. Rahul Dravid, who had made his Test debut five months earlier, showed grit and scored 40.

Mongia was still playing his role as an anchor to perfection. He was finally dismissed for 152 off the 366th ball of the innings. The 497-minute innings was punctuated by 18 boundaries and one six. Wisden Almanack eulogises Mongia and says: “An ebullient man, given to incessant appealing when keeping wicket, at the crease Mongia was calm, disciplined and accomplished. This was his maiden Test century, in his 13th match. He held sway for eight hours and 17 minutes to ensure a handsome lead of 179. Given the conditions, that made India unbeatable.”

India gained a massive lead of 179. Australia needed a Herculean effort to get out of the predicament. They were dismissed for 234 in their second essay. Kumble was the wrecker-in-chief picking up five wickets. Steve Waugh remained unbeaten on 67 but the rest of the batting failed to put up a good display.

What makes Mongia’s innings special was the fact that only two other batsmen managed to hit half-centuries. This performance as Wisden Almanack says was “testimony to the magnitude of Mongia’s performance.”

India won their first match against Australia since the famous Melbourne victory in 1981. Tendulkar maintained India’s clean home record in Test cricket after the home team’s narrow 16-run loss (series defeat) against Pakistan at Bangalore in 1987.

Man of the Match: Nayan Mongia