Needing 19 for victory with one wicket in hand, Jimmy Adams scripts a thriller with Courtney Walsh

Needing 19 for victory with one wicket in hand, Jimmy Adams scripts a thriller with Courtney Walsh

On May 29, 2000, in what was Curtly Ambrose and Courtney Walsh’s final appearance in the Caribbean, West Indies pulled off an amazing victory from the jaws of defeat against Pakistan, as the latter left the island empty-handed yet again. Karthik Parimal looks back at that closely-contested Test. West Indies captain Jimmy Adams and Courtney Walsh run off the field after beating Pakistan by one wicket, on the fifth day of the third and final Test match on May 29, 2000, at the Antigua Recreation Ground © AFP

On May 29, 2000, in what was Curtly Ambrose‘s final appearance in the Caribbean, West Indies pulled off an amazing victory from the jaws of defeat against Pakistan, as the latter left the island empty-handed yet again. Karthik Parimal looks back at that closely-contested Test.

One side that was often a thorn in the flesh of the West Indies, even when they were once the most feared side in the international circuit, was Pakistan. However, they rarely managed to trump them in their own backyard. On one occasion, in the April of 1988, in the absence of Viv Richards and Malcolm Marshall, Pakistan almost pulled off the coveted feat; they were beaten in the dying minutes of the game. Since then, never have they registered a series victory in the Caribbean. Nonetheless, in 2000, there was yet another Test between the two teams that is worth reminiscing, for it saw the visitors get closer to the trophy, yet again.

Inzamam-ul-Haq and Yousuf Youhana to the rescue

The first two Tests of the 2000 series ended in turgid draws, owing to the weather and also some lackadaisical performances. The third fixture at Antigua, though, turned out to be intriguing. Throughout the tour, the Pakistani batsmen seldom notched considerable scores, except for Inzamam-ul-Haq and Yousuf Youhana (now Mohammad Yousuf), who were a cut above the rest. The two often fired in tandem, and even if one of them fell early, the other would drop anchor.

In this Test, too, after Curtly Ambrose made early inroads, it was Inzamam and Yousuf who staged a counterattack. Together, they added 97 runs for the fourth wicket and, at one point, an imposing Inzamam had Ambrose flummoxed when he pulled him for a humungous six over deep midwicket.

As Inzamam attacked, Yousuf meticulously dented the rest of West Indies’ entourage. When the former fell for 55, he adjusted accordingly to ensure the scoreboard kept trudging forward.

Wickets kept tumbling at the other end but Yousuf remained stoic. He was unbeaten on 103 as Pakistan’s first innings ended on 269. Courtney Walsh stole the limelight with the ball, collecting his 100th First-Class five-wicket haul in the process. But, in Brian Lara’s absence, the score looked formidable.

West Indies’ reply was more assertive. Sherwin Campbell, Adrian Griffith and Wavell Hinds got starts, but it was Jimmy Adams and Shivnarine Chanderpaul’s determination in the middle-order that set the hosts up for a big lead. The duo dominated the attack, just like Inzamam and Yousuf had for Pakistan. At 218 for three, a massive lead looked inevitable, but the fact that a bowler the calibre of Wasim Akram can never be counted out was yet again reinstated.

Prodigiously swinging the ball both ways, he trapped West Indies’ skipper Jimmy Adams in front of the stumps before taking five more wickets for the next few runs to bundle them out for 273. A slender lead of four runs is all they could muster. Akram’s spell was invaluable, for it gave the visitors an incredible opportunity to surge ahead in the last Test of the series.

Inzamam-ul-Haq and Yousuf Youhana to the rescue…again

West Indies’ pace battery — comprising of Ambrose, Walsh, Franklyn Rose and Reon King — was unleashed and, once again, had the batsmen hopping at the crease like a cat on a hot tin roof. They were reduced to 49 for three, before the familiar duo of Inzamam and Yousuf occupied the crease. An 80-run partnership ensued this time around, but once they fell, the rest of the pack folded swiftly.

A second innings score of 219 meant that the hosts now required 216 to win; a dodgy chase was likely.

By the skin of the teeth

On the fourth day, despite the fall of two quick wickets, riding on Hinds’ well-compiled half-century, and aided by starts from Griffith and Chanderpaul, West Indies finished on 144 for four, with Adams still at the crease to oversee 82 runs on the final day with six scalps remaining. However, Akram was the destroyer-in-chief again. He instigated a collapse that saw the scorecard slump to 177 for seven, and then 197 for nine.

Needing 19 to win with one wicket in hand, Walsh looked to give strike to his captain, who was still battling it out in the dripping heat of Antigua, as quickly as possible.

Then fortune swung in their direction. Walsh was caught off Saqlain, but the umpire thought otherwise. The latter then missed two easy run-out chances, leaving ‘keeper-cum-captain Moin Khan fuming.

As they approached the target, smile reappeared on the pensive faces of Adams and Walsh. A dab to the off-side off Akram ensued, and the duo scampered between the wickets to bring up a single that pushed West Indies to a 1-0 series victory. Adams’(48 not out) joy knew no bounds as he sprawled on the ground before his teammates engulfed him in total disbelief. Walsh did well to remain unbeaten on two. The Pakistanis were visibly disappointed, but it didn’t stop them from acknowledging their opponents, who had pulled off a remarkable heist. 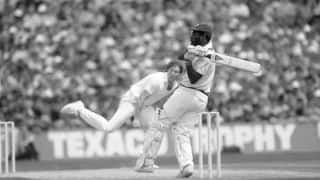