Neesham went from having not played an ODI for 15 months to picking New Zealand's first five-wicket haul of the World Cup 2019.

TAUNTON: Mental health issues has ended cricket careers. Ask Jonathan Trott or Marcus Trescothick, who could never return to playing cricket. Or Steve Harmison and Andrew Flintoff, whose careers were marred by bouts of depression forcing them to take an indefinite break. Heck, ask Will Pukovski, the young Victoria batsman. He was only 20 when he had to break away due to a mental health-related illness.

In June of 2017, Jimmy Neesham found himself in a bit of a similar, scary situation. Dropped from the New Zealand set-up after their Champions Trophy exit, Neesham contemplated retirement and even consulted a psychologist for help. While he always remained determined to take his place back in the team, poor form and injury concerns had made the entire process overwhelming for Neesham. More definitely, Neesham thought he was falling out of love with cricket.

But he hung on, a decision which in the hindsight, couldn t have been timed better. He recovered, made a switch to Wellington Fireworks and on the back of excellent domestic form, made a triumphant return to the side for an ODI series against Sri Lanka. That right there, was Neesham’s second-coming. Overcoming the biggest odd, the New Zealand allrounder was back from the dead. His next stop: World Cup.

In his first game since ODI return in over 12 months, Neesham clobbered 47 off 13, including five sixes off Thisara Perera in that run-fest of a series. Those were the first signs on Neesham s second-coming. But while against Sri Lanka he warmed up nicely with the bat with a couple of handy knocks, with the white leather, Neesham needed to justify his role, especially having Trent Boult, Matt Henry and Lockie Ferguson in the side.

Now Neesham is not your burly-looking fast bowler. His run-up is even weaker, almost like a warm-up jog towards the boundary to fetch the ball back. He isn t the quickest either, cranking it till the mid 130kmph. And honestly, up until Saturday when New Zealand bowled to Afghanistan, Neesham the bowler rarely looked effective.

After receiving a pasting from Sri Lanka and Bangladesh in the previous two games, where he d conceded runs and seven and 12 an over, Neesham had stated how he hadn t started his first World Cup well. The next game: 5 for 31, and Neesham has not only claimed his maiden ODI five-wicket-haul, but joined an elite company of New Zealand fast bowlers from past and present. Before Neesham s career-best showing, Matt Henry was the leading wicket-taker of the tournament with seven scalps. Neesham has now reduced the deficit by one.

Taunton on Saturday was his little moment of redemption. Afghanistan looked to be in a fun mood and Hazratullah Zazai, clearing his front foot was swinging everything at sight. Afghanistan had put on 51 for the opening wicket where Henry and Boult seemed ineffective. The surface had more than just a tinge of grass on it, and Williamson, who usually employs Colin de Grandhomme as first change with Ferguson, handed the ball to Neesham, believing he could get good pace out of the surface. Not only did Neesham answer his captain s call, he attacked Afghanistan s batsmen with tight, back-of-the-length bowling, en-route to claiming the best figures of his professional career. In a space of eight deliveries, Neesham changed the game on its head as Afghanistan, from 66 for 0, slumped to 70 for 4.

There was extra bounce on offer and the surface suited someone as tall as him. Understanding it well, Neesham hit the deck hard and was rewarded handsomely. If Henry and Ferguson landed crucial blows in the previous two games, Neesham led New Zealand s pace assault in Taunton and managed to fool, deceive and bounce out Afghanistan s batsmen.

Zazai was blatantly going after balls outside off. That is where Neesham had him slicing temptingly. Rahmat Shah was square and nicked the ball to Martin Guptill and backward point and Gulbadin Naib, the captain, offered a faint edge to a ball that rose. In his first three overs, Neesham had accounted for three wickets. He bowled a cross-seam delivery to Mohammad Nabi who tickled the ball to Tom Latham. Yet, the delivery to get the fifth was another beauty, rocketing off after pitching to clip Najibullah Zadran s glove along the way to Latham. Good, aggressive fast bowling.

Neesham s dominance with the ball could mean that Tim Southee might have to wait a wee bit longer for his turn; perhaps even after he is match fit. On the eve of the match, coach Gary Stead had pointed out how New Zealand would want to give their key players more match time than favouring thoughts of rotating them as the World Cup progresses. After his performance, Neesham could well fit in Stead s bracket of those key players .

With three wins to start, New Zealand have established an early and somewhat of a strong foothold. But at the moment, New Zealand are going with the motion; ticking things along nicely. From here on, it gets tougher. India lay next, one of the stronger teams and the co-tournament favourites.

Four years ago, Neesham had narrowly missed the cut for the World Cup at home to Grant Elliott and was in the stands at Eden Park as he watched Elliott smash that six off Dale Steyn to take New Zealand to the Cup final. This year, he has a better seat and holds the power to ensure New Zealand go one better than they did in 2015. 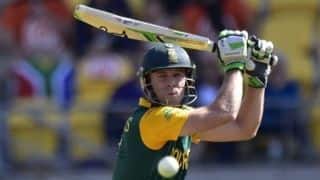